Postcards from the past

Postcards from the past 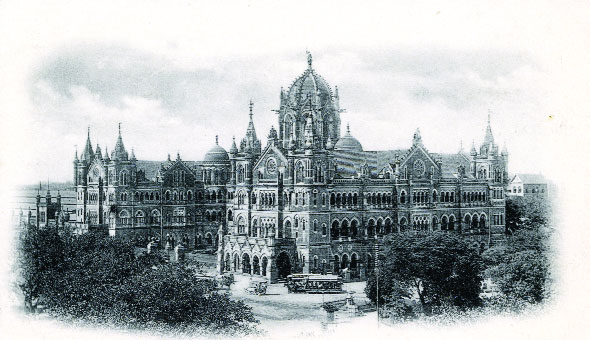 Globetrotters bring back the stories of the British Raj through images that capture many moods and nuances of a country under a foreign yoke. By Uma Nair

Imagine discovering a size nine Peter Lord shoe box full of images capturing life in India a century ago in one of Scotland’s national collections. Curator Omar Khan stumbled upon such a postcard from a collection called Women Baking Bread. These postcards from the British Raj come with exotic tales.

Opened at Art Heritage, Globetrotters, Early Postcards from the Indian Subcontinent, from the prestigious Alkazi Foundation, are a selection of picture postcards that capture the many moods and nuances of a country under a foreign yoke in the years leading to Independence.

The exhibition has a representation of the Presidency states of Bengal and Madras, also Delhi, Agra and Bengaluru, and covers the larger South Asian ambit of postcards in Ceylon.

One section is devoted to images of Mumbai (erstwhile Bombay), seen not only in the cityscapes and elite communities but also the mythological, allegorical works of Ravi Varma, who founded a press just outside the city. Another section explores popular images from Delhi and the hill stations (Shimla, Ooty) and Kashmir, and concludes with images from the Independence movement.

The show encompasses key themes important to postcard publishing. It straddles religion, dancers, teas and soaps, famines, fakirs, humour, warfare and the role of postcards in the Independence movement. It presents stories of the first postcard publishers of the sub-continent between 1892 and 1947, most of whose images have not been seen since they were published a century ago.

Monochromatic and magnificent is the Clifton & Co postcard of Victoria Memorial Terminal with a note written in 1903. The Chhatrapati Shivaji Terminus, formerly known as Victoria Terminus Station, in Mumbai, is an outstanding example of Victorian Gothic revival architecture in India, blended with themes deriving from Indian traditional architecture. The building, designed by the British architect FW Stevens, became the symbol of Bombay as the “Gothic City” and the major international mercantile port of India. Built over 10 years, starting in 1878, according to high Victorian Gothic design based on late medieval Italian models, its architectural detailing of remarkable stone dome, turrets, pointed arches and eccentric ground plan is close to traditional Indian palace architecture. It exemplifies the blending of two cultures, of brilliant British architects working  with Indian craftsmen to include Indian architectural tradition and idioms, thus forging a new style unique to Bombay.

Yet another beauty is Cashmere Gate. It reminds us of the Moghuls and their architecture, it also reminds us of monuments touched by the ravages of time. This monochromatic image with hints of green foliage stands as a residue of its glorious past. Delhi used to be enclosed by high walls; had 14 gates as entry and exit points from different directions.

A number of postcards  depicting  men and women becomes an emphasis that has vast narrative possibilities of this deceptively elementary medium. The diversity of individuals represented speak clearly to this. The telegraph person’s attire, the saris worn by Parsi women, the cast of characters sitting in a group, and the people punctuating a street scene. There are no details but there are specifics of cultural ethos and a certain lighter hint of the brown skins.

The Parsi lady sitting at a Singer sewing machine with another bejewelled woman watching  her sewing is a charming image of candour and caprice. Then there is a black and white image of schoolgirls from Madras and yet another captivating image of Hindu girls of that period. It was interesting to see the flounces in their blouses, some short with a bare midriff and some longer. The setting seems Maharashtrian by the look of the way they have worn their sarees but what is even more intriguing is the manner in which they are all engrossed and wrapt in conversation.

Omar Khan as a curator affirms the truth that postcards being circulated among the masses over time became a form of knowledge dissemination, as they projected images of prosperity, poverty and degrees of power that lay within and without among common people.

While we are looking at vignettes of everyday lives, we are also looking at images from colonies as it were. Each city belongs to an album of memories, and you walk away with nostalgia writ large.

(Globetrotters, Early Postcards from the Indian Subcontinent runs till November 17, 2018