A blip in India’s story

A blip in India’s story 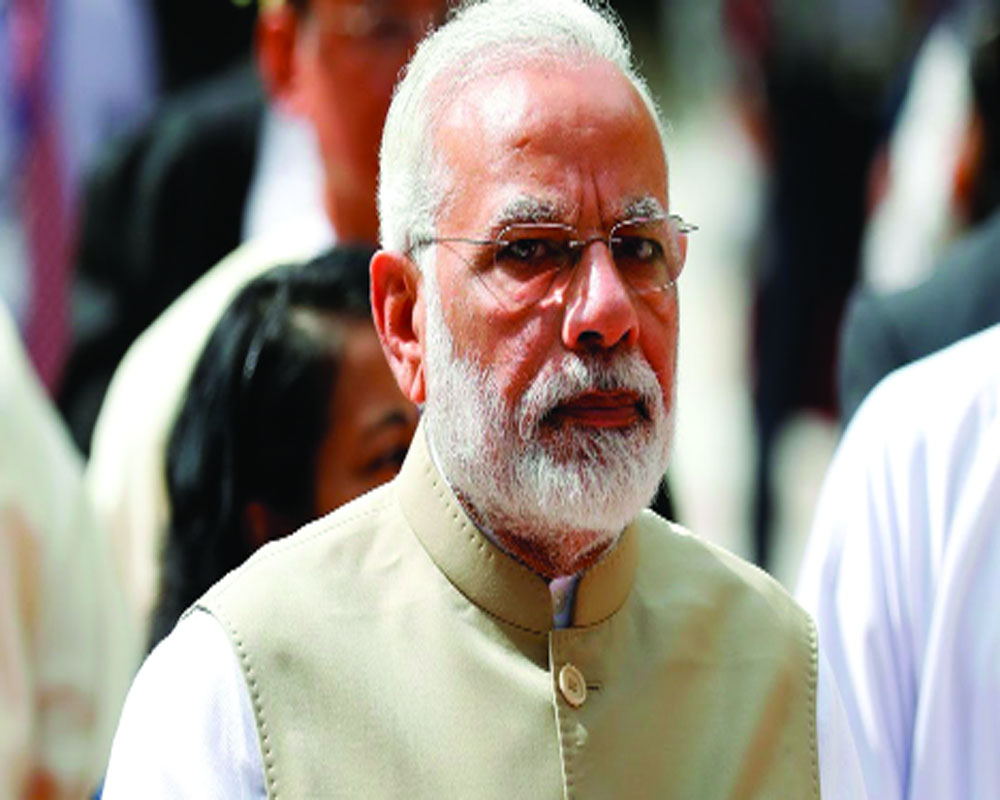 Economic prowess, strategic capability and the way world leaders perceive a nation are crucial markers of our foreign policy. The Modi Government has failed on each count

The ‘Free Hugs Campaign’ is a social movement that involves individuals who offer hugs to other people  to showcase the power of a random act of kindness. The movement is motivated by the phrase ‘sometimes a hug is all you need’. Foreign policy is a broad term used to describe the approach/strategy of one country vis-à-vis the other or a union representing countries, for example, the European Union. The two statements mentioned above may seem incongruous but Prime Minister Narendra Modi’s practice of ‘hugplomacy’ with India’s neighbours and friends, while tackling the nuanced area of foreign policy, makes both these statements relevant. Unfortunately, since foreign policy and the arena of international relations are serious matters, this is one of those times where a hug may not be enough. In this week’s column, I will examine how the Prime Minister’s foreign policy has been a failure and will talk in detail how the significant investments behind the Prime Minister’s jet setting ways have not really borne any tangible results.

The amount spent on Prime Minister Modi’s foreign trips is about Rs 2,021 crore, which dwarfs the Rs 1,346 crore spent on foreign trips during former Prime Minister Manmohan Singh’s term from 2009-2014. Therefore, purely relying on numbers and the sheer amount spent on foreign trips, one can reasonably say that foreign policy appears to be an area of focus of Prime Minister Modi. But let us evaluate what fruits this investment has borne. As stated above, while foreign policy has no clear definition or boundary, this column, too, is limited by word constraint and, therefore, I will evaluate three heads: Economic prowess, strategic capability and how other world leaders view the Indian Government.

On the issue of economic prowess, reports are not encouraging. A popular metric to measure the economic success of a Government’s foreign policy is the amount of foreign direct investment (FDI) that a country receives. In the financial year 2017-18, the increase in FDI stood at a five year low of three per cent and there is a growing concern among foreign investors about India. The buck must surely fall with the Prime Minister. This concern among foreign investors is inspired by the overarching approach of this Government to discard expertise in favour of image-management. Repeatedly, questions have been raised about the manner in which the ruling Government has changed and how should growth be measured, which has flummoxed even the best statisticians and economists.

In order to encourage foreign investment, it is imperative that the Government provides accurate numbers about the status of the Indian economy so that at the very least, investors understand what they are getting into. The moment doubts arise about the authenticity of the numbers published by a Government, it will inevitably lead to hesitation and trepidation among potential investors.

The Government’s colourful approach to numbers is not the only cause for concern. The economic catastrophe, ie, demonetisation, is yet another example that reflects the unreliable, ill-thought out and unpredictable approach of the Government that has done great damage to India’s story. The past few years of this Government were littered with examples of an approach that aggressively countered expertise with compliance. Just take the resignation of two Reserve Bank of India Governors in the past four years as an example or the nomination of mere yes-men to positions that demand integrity and expertise. All of these instances are only a few examples as to why foreign investors are hesitant about the Indian economy.

Another area of foreign policy where Prime Minister Modi has missed a trick is strategic prowess. In this context, it will be relevant to note that there are certain interesting developments in the world that India has failed to take advantage of. For example, the past few years has seen a clear deterioration of the relationship between China and the United States, especially with respect to trade. Since China is a manufacturing hub that services a number of requirements of the American economy, this dispute between the two countries could have been a boon for India where it had an opportunity to showcase its own prowess so as to fill the void that would exist due to the present stand-off between the US and China.

Instead, what we have seen is the US looking to other countries to fulfill its requirements and a deterioration of the relationship between it and India. The clearest example of this has been the postponement of the ‘2+2 dialogue’ between the US and India for the third consecutive time (the ‘2+2 dialogue’ is a mechanism where two countries’ defence and external affairs ministries discuss among other things the scope for strategic partnerships).

Another way in which the success of a Government’s foreign policy is gauged is by the manner in which other world leaders view our Government. The term ‘diplomacy’ implies that this determination can rarely be made on the basis of explicit statements or acts but rather have to be inferred. While the BJP was extremely proud to talk about having a leader with a 56-inch chest, this arrogance has had to take a beating over the past few years. The most obvious example is that of the surgical strikes, where in order to win political points, the BJP created noise and celebrated victory about a tactical strike, despite the fact that such strike acts have taken place a number of times in the past without the same cries of victory or celebration.

It was inevitable then that the Prime Minister and this Government has been a lot more coy and sheepish while facing uncomfortable questions about Chinese incursions in Doklam. Celebrating premature victories and appropriating the brave acts of soldiers for winning political points presents an opportunity to other countries to push back a Government that is already on the back foot, domestically, because it has presented a less than accurate picture of its might.

This coupled with the recent examples of how President Trump belittled the massive contribution of India in Afghanistan and how our relationship with our neighbours has suffered due to the aggressive, ill-thought foreign policy of this Government, shows that when Plan A, ie an aggressive foreign policy fails, the Prime Minister and his Government do not have a Plan B which involves tact or diplomacy.

Richard Haass, a famous diplomat, once said, “Success in foreign policy, as in carpentry, requires the right tools for the job.” On the basis of the past few years, it appears that the Prime Minister only has one tool in his pocket and it has not really done the job.