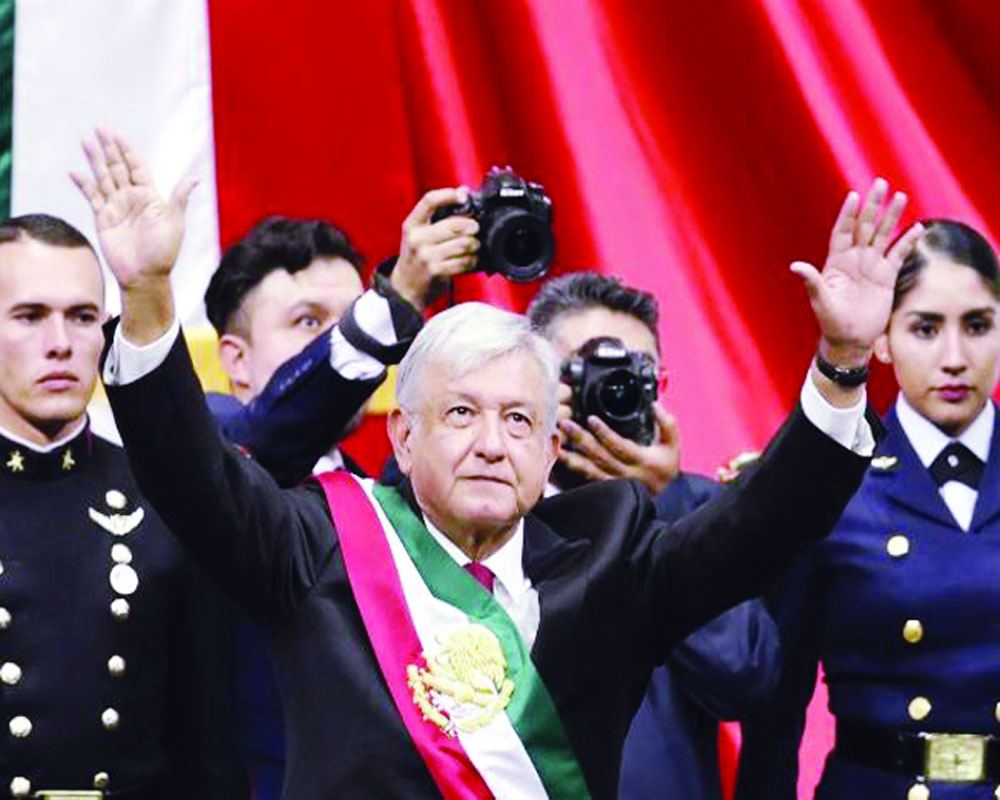 With the election of Lopez Obrador as the President, a new era of politics has begun. He must remain true to the grandiose promises made during the campaign

Amid the surge of demagogues and rabble-rousers of far-right across the globe in the recent past, the coming of Senor Andres Manuel Lopez Obrador as the newly-elected President of Mexico has broken new ground in the Western hemisphere. Elected as the leader of the National Regeneration Movement (MORENA), which was founded by Lopez Obrador following two failed attempts in 2006 and 2012 elections as a candidate of broad Left coalitions, he had earlier headed the federal district Government of Mexico city. Like the US presidential election, Mexico, too, elects its President in July every six years and the President-elect assumes office on the first of December. Obrador was sworn in as Mexican President in December 2018.

Having taken charge of the Government and in pursuance of his campaign promises, Obrador has not moved to the presidential palace, has halved his own salary in the proposed Budget and also declared that he won’t allow anyone else to get more than him. Change can be brought about — during his campaigns, he promised to “combat corruption” and maintain an “austere Government.” Other assurances include more students’ scholarship and pension to senior citizens, which can be financed by “cutting grafts.” He flies in commercial airlines and put the presidential plane on sale. As the district Government head earlier, he had adopted several policies that benefitted vulnerable sections, infirm, poor women and aged population.

Instead of occupying luxurious presidential palace, he has started working from nearly a century-old national palace — the official seat of power — and has continued living at his private home. He strongly believes that neo-liberal policies have benefitted a “minority of the population” while “impoverishing a great majority.” Significantly, a century after the 1910 revolution — the first landmark in the political history of Mexico after it gained independence from Spanish colonial rule in 1822 — Obrador has become the first one who had begun as a protest leader but within the folds of the Institutional Revolutionary Party (PRI), Spanish Partido Revolucionario Institucional, which had controlled all levers of power for seven long decades since its formation in 1929.

Paradoxically, the Mexican political system was bizarre as it didn’t permit the incumbent to have a second term, but he was empowered to select his successor who would be the ruling party’s nominee in the ensuing election. Once in power, the new President would nominate his candidates for the next gubernatorial election and likewise, new Mayors would be hand-picked nominees of incumbent Governors. Everything was fine-tuned with ground support of consensus manufactured through local branches of cross-sectional wings of the ruling PRI.

The first crack in this electoral machine appeared during the 1988 election when Cuauhtémoc Cárdenas challenged this nomination process. Echoing the feelings of the growing middle class, Cárdenas — a former Governor and also the son of a former but revered President who had nationalised petroleum sector way back in 1934 and redistributed land to the poor peasants — asserted that the PRI-managed system was no longer in sync with a modern country of urban professionals. Although PRI-sponsored candidates won the election, the then President Carlos Salinas de Gortari read the writing on the wall and initiated measures to cleanse the system, including setting up of an autonomous Election Commission and ensuring proportional representation of parties in Parliament. Measures were also taken to withdraw discretionary powers of bureaucracy, mediated by the party, which resulted in the ruling party’s loosening grip over the patronage network.

The beneficiary of these reforms was the main Opposition party, National Action Party (PAN), which had started gaining foothold in the northern States bordering the US. For quite long, people from these States would enter the American market as illegal immigrants to work and upon their return, would start grumbling over the dysfunctional drainage, primary health care, schools and broken roads among others. No wonder, simmering discontentment led to the defeat of PRI in these States. The influence of PAN gradually spread from winning a few seats in the lower house of Parliament to capturing seven of total 31 States by the late 1990s. The disenchantment with the PRI was also deepened with the coming of the North American Free Trade Treaty (NAFTA) between Mexico, the US and Canada in 1991, which saw the coming of a large number of maquiladora (assembling plants owned mostly by Americans where goods are assembled and exported back to the US) in the border Mexican States. It was a win-win situation for both: US manufacturers would gain by cheap Mexican labour and later would be happy with the availability of jobs nearer home and it would further expand the volume of Mexican exports to the US. In the bargain, however, more than a million formal jobs were lost under the new economic policies that culminated in a near financial collapse in the mid-1990s.

Eventually, all this led to the defeat of the longest ruling party in the 2000 presidential election. Incidentally, the year 2000 also turned out to be watershed for President Obrador Manuel when he broke away from the PRI. He was earlier the head of PRI in his home State of Tabasco. First, he, along with Cárdenas, the rebel hero of 1988, joined the Left-oriented democratic revolutionary party (PRD) but subsequently switched over to a protest movement MRM, which he founded to mobilise students and youths against “political corruption” and “electoral fraud” and won the district election. MORENA became a political party in 2014 only and is now in control of both the Houses.

Vicente Fox, a former boss of Coco-Cola empire in Mexico, was the biggest beneficiary of the changing contours of economics and social matrix triggered by NAFTA. During his six-year rule, he realised that reforming the system was not straight as was winning the 2000 presidential election. Most of his reform-oriented legislations couldn’t pass through both the Houses of Parliament that remained under control of the old guards of PRI and the PAN; though Fox won with its support but remained at loggerheads with this party. In a country where the President has always been seen as the most powerful force, people got frustrated with a perforce lameduck incumbent, who sought to follow procedural niceties aimed at bringing durable change. As a result, Fox lost and the main Opposition, PAN, won the next election in 2006. But PRI returned to power again in 2012.

During the last six years, the lingering crises over dealings with drug, endemic violence and pervasive corruption, where the last PRI President Enrique Peña Nieto himself was seen involved thoroughly, disillusioned the voters. Above all, President Pena couldn’t manage Central American refugee crises. Interestingly, erecting a huge border wall and that, too, financed by the Mexican Government to prevent the influx of Mexican and Central American immigrants to the US was a persistent campaign theme of Donald Trump. Prospects of deportation of 10-12 million Mexican illegal immigrants are already looming large. The total population of Mexico is 140 million.

Perforce decades of civil war and leftist insurgency in Guatemala (Mexico’s southern neighbour), El Salvador and Honduras and its disastrous economic fallouts mismanaged by marauder regimes in these Central American countries, a caravan of refugees has recently marched through Mexico and is now lodged in tents at the US border. Paradoxically, its powerful northern neighbour has always remained a factor for Mexican patricians and plebeians alike as goes an old Mexican maxim: “We may be far from God but not from the US.”

Meanwhile, Obrador has signed agreements with these countries to chalk out a long term “development plan”, creating jobs and has also allocated $2 billion in his first budget for this purpose. The outcome of any long term plan takes years, so it would mean nothing to the impatient American President. Nevertheless, it does indicate a lot to both Mexicans and its impoverished southern neighbours.