A political thug in blunderland

A political thug in blunderland 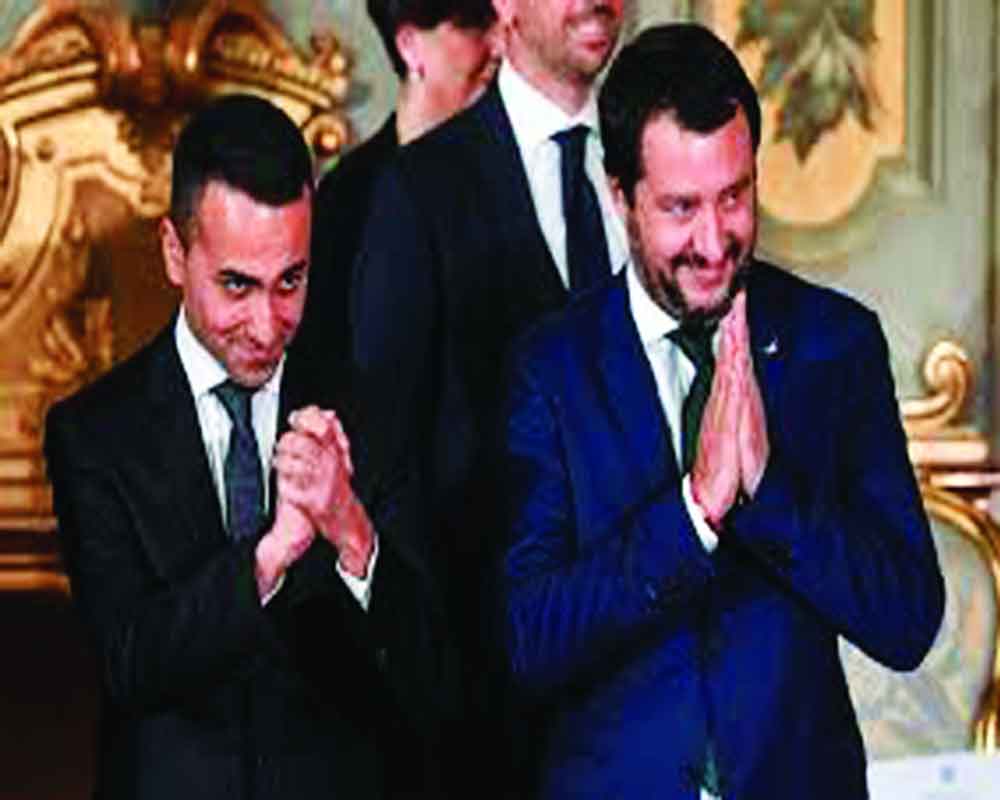 Salvini, a hard-Right populist who thought he could force an early election and become Italy’s strongman by breaking up the coalition Government he served in, has publicly cut his own throat

There is something very gratifying about watching a political thug get hoist with his own petard. Matteo Salvini, the hard-Right populist who thought he could force an early election and become Italy’s strongman by breaking up the coalition Government he served in, has publicly cut his own throat. And almost everybody is enjoying the spectacle.

It’s not even a year-and-a-half since the last Italian election, when the anti-establishment Five-Star Movement (M5S) and Salvini’s ultra-nationalist League party got enough seats to form a Government together. They had very little in common, but political power is a great lubricant and they managed to rub along together with no major disasters for 18 months.

What caused the break-up was not policy differences but the polling figures. Back in March 2018, the M5S got 32 per cent of the vote and the League only got 17 per cent, so M5S was definitely the senior partner. Salvini only became deputy prime minister, but he used the job to appeal to Italians’ worst instincts

He demonised migrants, Romanies, Muslims and Left-wing “do-gooders” as enemies of the people and presented himself as the super-patriotic hard man who could see them all off and Make Italy Great Again. He prevented ships that had rescued drowning migrants from landing them in Italian ports, he carried a rosary and kissed it frequently, he thanked the Virgin Mary for all his “successes.”

It kind of worked. Many Italians are sick to death of the country’s political and economic stagnation, and Salvini was brash and new. Nasty and bullying too, especially towards non-Whites and migrants, but many people didn’t mind that. The League’s polling results began to improve and those of the M5S started to slide.

By the European elections last May, the two coalition parties had entirely reversed their positions: the League got 34 per cent of the votes, and the M5S got only 17 per cent. The European poll had no direct effect in Italy but inevitably Salvini began to dream of ditching his awkward M5S partners (who are neither racist nor neo-fascist) and going it alone. The political arithmetic seemed to make sense. If the League’s numbers kept on going up, it would win enough seats in the next election to form a different coalition with a more congenial small party like the Brothers of Italy (which is openly fascist). By this month, the League was hitting 38 per cent in the polls and Salvini decided it was time to pull the plug on his current partners.

He clearly knows how to count, which is a valuable skill in politics. But a good politician needs to understand strategy, too, and in that department Matteo Salvini is as thick as a brick. He forgot that polling numbers are not the same as seats in Parliament.

The League would clearly win an election if one were held today but an election could only happen if no alternative Government can be formed in the current Parliament. However, last year’s national election gave the M5S almost twice as many seats in Parliament as the League – enough seats that it might be able to form a coalition with some other party.

It would be tricky, of course, because M5S is deeply unpopular with most other parties and especially with the official Opposition, the centre-left Democratic Party (PD). Politicians hate being mocked, and the M5S specialises in mockery. Maybe that was what Salvini was counting on to save him. If so, he got it wrong.

The moderate parties in Parliament are utterly horrified at the prospect of a far-Right Government in Italy run by the League in coalition with the Brothers of Italy. So last week the Democratic Party began talks on a coalition with the M5S.

They would both be decimated if there were an election now and neither of them wants to see an extreme-Right Government take power in Italy, so agreement on principle was relatively easy.

Agreeing on a programme and a Cabinet in the next week will be harder and it could all still unravel. But it could also be a coalition that lasts until the next scheduled election in mid-2023.

Salvini is outraged, of course. He’s even talking about a “march on Rome” next month, in a sly allusion to the March on Rome that brought the dictator Benito Mussolini to power in Italy in 1922. But his blunder has been huge, and for the moment at least his credibility is shot.

It almost makes you feel sorry for him. How could he have foreseen this? After all, this is only the first time he has ever lived in Italy all his life.

(Gwynne Dyer’s new book is Growing Pains: The Future of Democracy and Work)