Alliance fears in UP

Alliance fears in UP 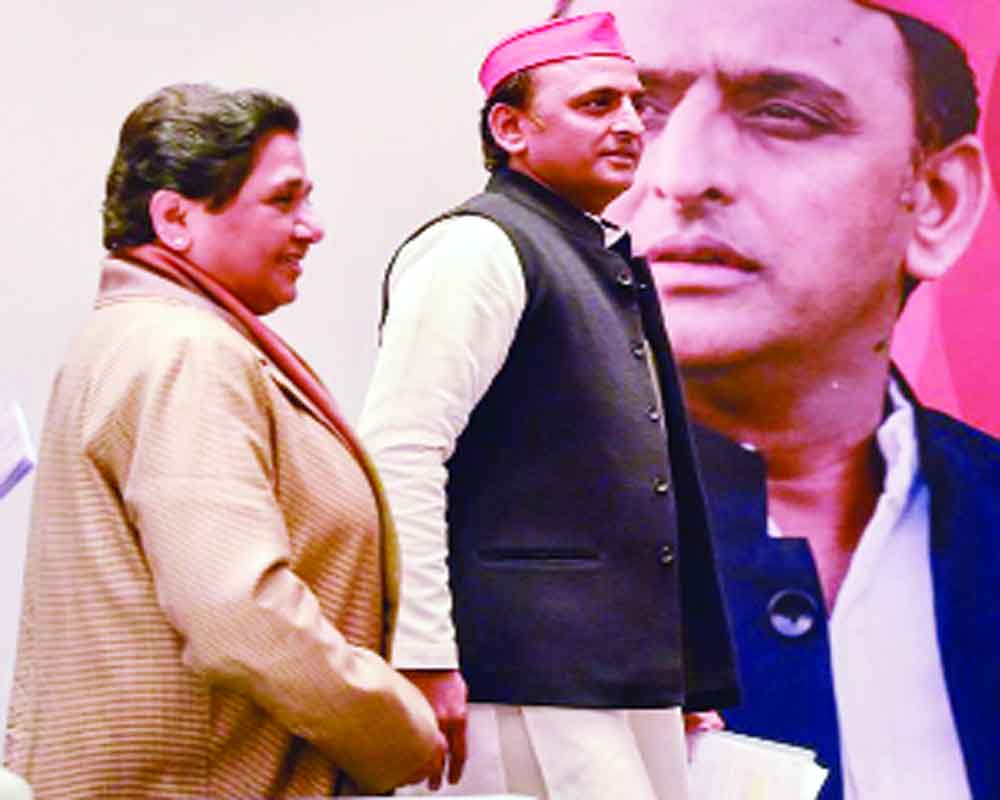 It was a historic reunion, the coming together of Bahujan Samaj Party (BSP) supremo Mayawati with Samajwadi Party (SP) chief Akhilesh Yadav at a joint election rally with a clarion call to voters to seize their day by giving them the verdict for Uttar Pradesh (UP), one that could take on the ruling Bharatiya Janata Party (BJP) in a game of numbers. History has undoubtedly shown the possibilities of an avenging caste phalanx when BSP and SP founders Kanshi Ram and Mulayam Singh Yadav had held back the BJP’s temple surge almost 26 years ago with slogans of “Mile Kanshi Mulayam, hawa mein udd gaye Sri Ram.” With the combined support of SP’s Muslim-Yadav votebase and the BSP’s consolidated Dalit support, the alliance won the Assembly elections of 1993, arresting the tide of the BJP and weakening the Congress, which was at the receiving end for failing to stop the Babri demolition. But that dynamic is a lot more complex today. The temple is no longer the issue as the BJP is going all-out with an aggressive thrust on nationalism that has supplanted it. And the Congress is on a resurgence courtesy its young leadership and is now seen as a protector of minorities. Besides, Mayawati herself is facing a votepie slide. Still the SP and BSP, propped up in so small measure by the Jat heft of the Rashtriya Lok Dal (RLD), have the numerical strength to take on the BJP and corner the “other” vote. But with the Congress bent on reviving its own fortunes rather than being part of the mahagathbandhan and with its charismatic general secretary Priyanka Gandhi appealing to both backwards and Muslims, the new alliance fears the BJP could benefit from a three-way split. It had hoped the Congress’ upper caste social base would damage the BJP more but its umbrella approach could dent it too. That explains Mayawati’s call to Muslims to ensure there is no split of community votes between the gathbandhan and the Congress, saying the national party was no different from the BJP and only a counter-polarised verdict could change things. Alliance leaders are genuinely worried about triangular fights in minority-dominated Saharanpur and Moradabad for instance, where the Congress candidates could play spoiler. But Muslims also realise the strategic value of their vote and are factoring in candidate winnability. Besides, even if they choose the Congress, the impact would just be felt in about eight seats.

In the past, the Dalit-minority (DM) consolidation has worked almost as effectively as the Muslim-Yadav combination (MY) in the State. The DM coalition has been most effective in western UP where they are above 40 per cent in half the seats and almost 50 per cent in some, a chunk that can swing the verdict significantly. Mayawati is simply going by past experience of her wins, in 2007 to be precise, when she was successful in getting 28 Muslims elected, ensuring representation in the Assembly. But for the Lok Sabha polls that followed, the minority vote shifted to the Congress. Thereafter, the BSP lost its own hold on the M factor despite fielding many faces, to a lesser degree to the Congress and mostly to the SP. The BSP’s dalliance with the BJP to keep power further pushed the Muslims away from it. So though the SP is surer about their support, Mayawati fears if her inclusion in a front would push some again to the Congress. Sure the Congress has made a tiny adjustment in seven seats, more as a quid pro quo to the alliance leaders’ scions, and announced a post-poll arrangement in case of a hung Lok Sabha, but that might be too late for Mayawati to re-establish her relevance in the State, leave alone nationally. Hence the desperate call for consolidation. The SP, too, has reason to worry about a drift from its pool as the Congress is increasingly positioning itself for a national challenge to the BJP than a state-level battle, demonstrably borne out by its Assembly wins in the heartland states. The SP-BSP have State bypoll victories to show as a dipstick. And in the Lok Sabha, the voter seems to be guided by the overall perspective though the SP-BSP is harping that with 80 seats, UP matters in the way India decides. The tussle within will be more interesting than the tussle without.