An election that lacked colour

An election that lacked colour 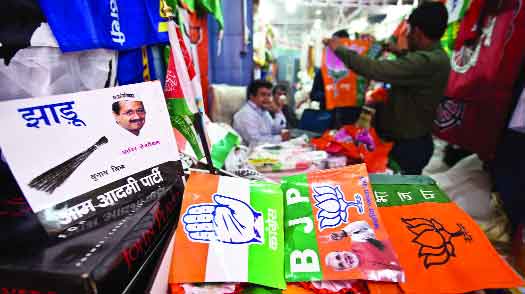 The 2019 Lok Sabha polls were unusual as political parties and their leaders stooped to the lowest level with their below-the-belt remarks. The voter was lukewarm, the context was polarised and money power was in full play

The 2019 elections are coming to a close. On May 23, it will be known which party will form the Government at the Centre. The satta bazaar worth Rs 1,000 crore is predicting that the BJP will emerge as the single largest party; that the Congress will improve its tally; and regional parties will continue to be powerful. In 2014, there was a call to “vote out the corrupt Manmohan Singh Government.” In 2019, Prime Minister Modi is at his best in defending his throne. There was a ‘Modi wave’ back in 2014, which is absent today. But Modi has subsumed the party, which is asking for votes in his name.

Modi was untested then and sold a ‘big dream’ to the people, promising achche din. This time around, it is not a cake-walk for him as the voters are disenchanted. The outcome of the 2019 election will depend on three things — the BJP’s performance in the Hindi heartland, where it lost badly in Rajasthan, Madhya Pradesh and Chhattisgarh; effectiveness of the regional satraps to hold their fiefdoms; and the BJP’s ability to make up the deficit in eastern parts of India.

Looking back, what will one remember about the 2019 poll? This is a lacklustre election and the poll atmosphere in many States has been lukewarm. Second, little voter enthusiasm has been seen. In 2014, there was a good voter turnout as two in every three Indians voted with gender gap almost negligible. The common man is indifferent to the current polls and NOTA (None Of The Above) option has gained popularity. Conscious voters, who do not want any candidate in the list but want to prevent bogus voting, have been using this option judiciously. “Koi bhe aane do, humein kya farak padha hai,” is what most poor people say, who are wooed by political parties. Even the 8.4 crore new voters, who cast their vote for the first time, did not show much enthusiasm.

Third, 2019 saw the poll campaigns stoop to a new low with all sides using below-the-belt remarks. This was true of BJP leaders — even the Prime Minister and party chief Amit Shah — all of whom lowered the bar to attack their opponents. Modi referred to former Prime Minister Rajiv Gandhi as “accused number one” in the Bofors scam and even said that he and his family had used the Indian Navy’s aircraft carrier INS Viraat to go for a vacation. Further, Modi fought the elections by invoking “nationalism” and attacking the Gandhi family for their omissions and commissions over the past decades.

The Congress, too, did not lag behind and used the ‘chowkidar chor hai’ slogan extensively. Congress chief Rahul Gandhi stuck to his pet issue of the Rafale deal. The verbal battle between West Bengal Chief Minister Mamata Banerjee and Modi was at its lowest. Meanwhile, the Opposition has been unable to stick to the poll narrative by raising bread and butter issues like jobs, farm crisis and rise in oil prices. However, at the State level, where the regional satraps rule, elections were fought on local issues. Modi had a tough time fighting these satraps at multiple levels.

Fourth, the money power was even more effective this election season than in 2014. Corporates were encouraged to buy anonymous elections bonds, which could be donated to political parties. According to official data, in 2018, election bonds worth 10.6 billion rupees were purchased.  Election spending in 2019 may be at around $7 to $8 billion, up from an estimated $5 billion in 2014 as per an estimate. The final price tag for the 2016 US election was $6.5 billion for the presidential and congressional elections combined, according to campaign finance watchdog OpenSecrets.org. Allegations of bribing voters with cash and luxury goods, too, were doing the rounds. The Election Commission (EC) had seized over Rs 3,999 crore, including cash, drugs, liquor and gold.

Fifth, the EC failed to play its role as a referee. Opposition parties have alleged that it has been partial to the ruling party. Despite the polarising speeches, the commission allowed Prime Minister Modi and Shah to violate the Model Code of Conduct and rejected all complaints. The Opposition, led by the Congress, even went to the Supreme Court seeking justice. Added to all of this were glitches in EVMs about which many Opposition parties complained.

Sixth, this was one of the most polarising polls in recent times. People either loved Modi or hated him and the polls revolved around him. The BJP used the religion and Hindutva card to the hilt while the Congress played its soft Hindutva card. Caste also played a crucial role. Poll violence marred elections in some States like West Bengal.

Seventh, social media, too, played its role in facilitating the spread of fake news. However, with all its ups and downs, it is a wonder how democracy in India has been thriving and power has changed hands 16 times so far peacefully. With all the complaints, the EC must be complimented for conducting the polls by and large peacefully.