An oath for swachh polls

An oath for swachh polls 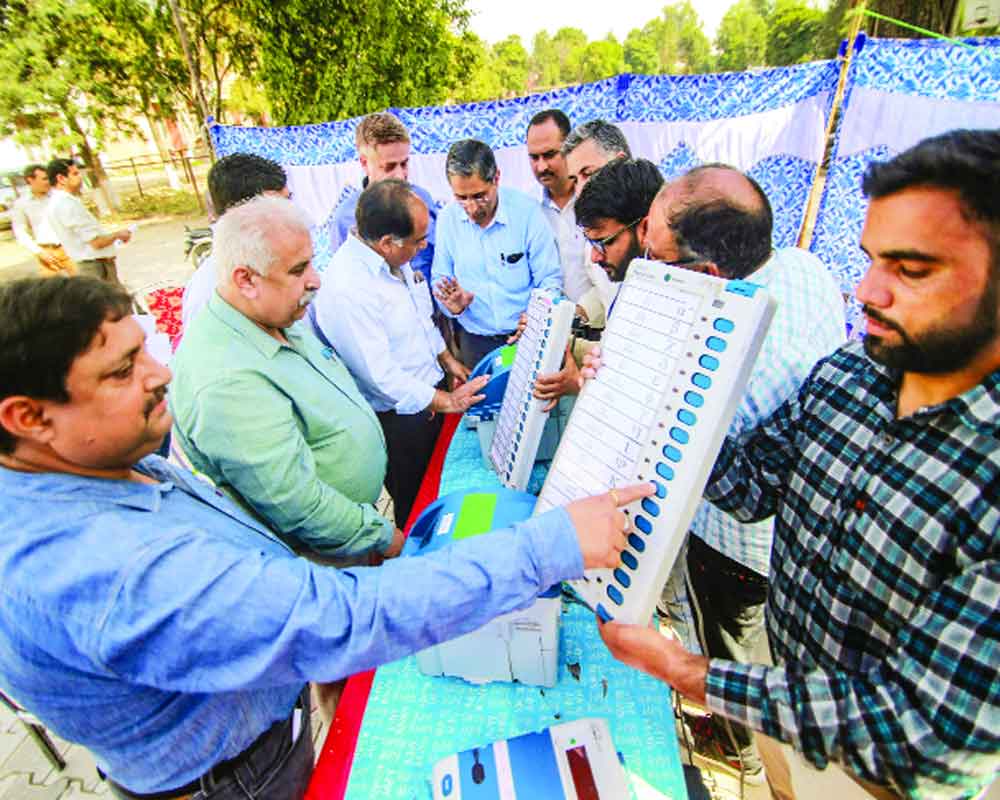 Electoral reforms are low priority for political parties. The alternative then is an awakened electorate, compelling them to behave ethically

“I pledge to contest these elections by honest means. I affirm that I shall seek votes only on the basis of ideas, plans, programmes and promises. I shall refrain from employing any illegal or unethical means like allurement, threat, coercion or violence targetted at the electorate or my fellow contestants. I vouch not to allow any illicit usage of money, alcohol or muscle power in my campaign. I pledge to keep these elections clean in letter and spirit.”

The 17th general elections, accompanied by polls to legislative Assemblies in four States, are round the corner. Imagine every candidate taking a pledge similar to the aforementioned one in order to keep the elections clean and ethical. It can be described as a “swachhata oath” for the elections. Let every candidate take it publicly at several places in his/her constituency and subsequently post it on his/her social media accounts. Let this be an individual enterprise to begin with. If it gains traction with the masses, then those candidates avoiding it  stand the risk of getting ostracised. One can definitely lie under an oath but it’s price can be heavy if it is an awakened electorate.

Malpractices are commonplace in elections. No wonder, the British enacted the Indian Elections Offences and Inquiries Act, 1920 as direct elections were introduced on a miniscule scale in India as a result of the Government of India Act, 1919 (Montagu-Chelmsford Reform). The reason was not because the British entertained a low opinion about the Indian character but because they were wiser by a long experience of conducting elections in Britain.

The onus of keeping the polls clean majorly lies with the political parties. They are the ones who stand to win authority and power. They are “the lifeblood of the entire constitutional system” as a Central Information Commission (CIC) decision in Subhash Chandra Agarwal v/s Indian National Congress and Others described it in 2013.

But how seriously have the political parties taken their responsibility? The answer is to be found in the pages of the Law Commission Reports No: 244 (February  2014) and No: 255 (March 2015). The Law Commission Report No: 244 titled, ‘Electoral Disqualification’, was actually an interim statement requested by the Supreme Court, which was hearing the Public Interest Foundation & Others V/s Govt of India case. At that time, the 20th Law Commission was already working on its main report on ‘Electoral Reforms’ in response to a request made by the Ministry of Law and Justice, Government of India, in January 2013. That report was ultimately published as Report No: 255.

The paper listed eight major issues for consideration like de-criminalisation of politics and disqualification of candidates; need to strengthen provisions related to disqualification; false affidavits; state funding of election expenses and donations to political parties; adjudication of election disputes; enhancement of punishment for electoral offences; issues pertaining to the role of electronic and print media and so on.

But how was the josh? The Law Commission received 157 responses, most of them being from individuals and civil society organisations. The Election Commission of India was the only body that sent its response. Of the political parties, the lesser said the better. One national political party viz, the Indian National Congress, and one registered party viz, the Welfare Party of India, sent their feedback. Only eight sitting Members of Parliament responded to the consultation paper, four each from the Lok Sabha and Rajya Sabha.

A national consultation, widely advertised in the Press and media, was organised in New Delhi on February 1, 2014.   Invitations were sent by post and email to various political parties. There were only eight parties who cared to send in their representatives — All India NR Congress (Puducherry), All Jharkhand Students Union (Jharkhand), Biju Janata Dal, Communist Party of India (Marxist), Nationalist Congress Party, Jammu and Kashmir National Panthers Party, Rashtriya Lok Dal and Telangana Rashtra Samithi. Most national and regional parties did not attend. The Election Commission of India was the only one to send its delegation. Former Chief Election Commissioner SY Quraishi also participated.

This illustrates the commitment of political parties, rather the absence of it, towards clean elections. This is least surprising because election funding (call it financing) is still an opaque territory. No political party would like to demystify it even while accusing others of corrupt practices.

The growing nexus between political parties and moneybags was anticipated quite early by C Rajagopalachari. The use of illicit money, Rajaji argued, was undermining the very foundations of India’s hard-won freedom and democracy. He called for a set of electoral  reforms in a series of scathing articles he wrote  for Swarajya, a magazine founded by him, and the Illustrated Weekly between 1957 and 1970.

The most radical reform he suggested for the pre-EVM era was reversing the voting process. Instead of voters queuing up at the polling booths, the ballot box should be taken  door-to-door by the administration (candidates and polling agents would accompany) with proper security on the pattern of decennial census. The step, he felt, would obviate the need for expensive campaigns by political parties to bring voters to the ballot boxes while ensuring nearly universal voting.

There seems to be no action taken by the Government on the Law Commission of India’s reports No: 244 and 255 over the last five years. It was to the credit of the Supreme Court to disqualify convicted candidates/legislators for life time. The only important proposal by the Government ie, exploring the possibility of simultaneous elections to Lok Sabha and State legislative Assemblies, was examined by the Parliamentary Standing Committee on Personnel, Public Grievances, Law and Justice for its 79th Report (December , 2015). Its recommendations are now pending with the Law Commission of India where it has been referred to “work out a practicable road map and framework” (vide Lok Sabha starred question No: 219, dated August 1, 2018). We are going round and round the mulberry bushes. The last amendment to the Representation of the People Act, 1951, had come in 2004.

The alternative to formulating new laws by Parliament is voluntary ethical behaviour by parties and contestants. There is still another alternative where a conscious and conscientious electorate compels the contestants to behave ethically. The electorate oath suggested above is only a step in that direction.

(The writer is an independent researcher based in New Delhi; views expressed herein are his personal)