Apt writer for a political narrative

Apt writer for a political narrative 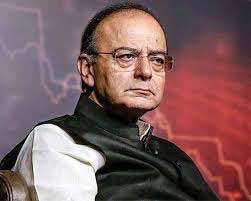 A self-made man, Arun Jaitley rose in politics solely by dint of his hard work and due to sheer merit, intelligence and his persuasive ways in dealing with opponents and handling conflicting issues

The passing away of Arun Jaitley at the age of 66, when most Indian politicians are considered mature enough to soldier top constitutional posts, is a severe blow to the intelligentsia and the politics of understanding.

Though few can dispute that the former Finance Minister was an astute politician, a brilliant legal mind and a wonderful orator, what made him even more remarkable was the fact that he kept his razor-sharp mind active through his blogs till the very end of his life, knowing fully well that his days were numbered.

Despite his protracted illness, he never showed any inkling of nervousness in his writing and kept on serving his party, the Bharatiya Janata Party (BJP), the Government and the country with aplomb.

It is a matter of sadness that the BJP in less than two years has lost its four top articulate leaders in Arun Jaitley, Sushma Swaraj, Manohar Parrikar and Ananth Kumar, all at relatively young ages. Jaitley joined the BJP during his college days in the early 70s through the Akhil Bharatiya Vidyarthi Parishad (ABVP) when most of his peers were making a beeline for the Congress offices. A young man at that time, he doggedly fought and went to jail during the Emergency. Later, he joined the legal profession and for years on end, he became one of the best and most articulate lawyers ever seen in the Delhi High Court and the Supreme Court.

A self-made man, Jaitley rose in politics solely by dint of his hard work and due to sheer merit, intelligence and his persuasive ways in dealing with conflicting issues. Over the years he became an indispensible part of the BJP’s politics and his formidable talent was recognised not just by his peers and contemporaries but also  by his opponents in law and politics.

He was deeply involved  in supporting his long-time friend Narendra Modi and Amit Shah when all were determined to finish them off in the aftermath of the February 2002 Godhra train carnage and during their incarceration in the Sohrabuddin Sheikh encounter case and other cases slapped by the United Progressive Alliance (UPA) regime through the Central Bureau of Investigation (CBI).

He wrote a detailed letter as Leader of Opposition in the Rajya Sabha to the then Prime Minister Manmohan Singh narrating how the CBI was being used to target Modi and Shah.

Though Jaitley’s erudite account in the letter of the  misuse of the CBI did not have a major impact on the ruling establishment, it did expose the fact that a suspicious case was being pursued vigorously to finish the political careers of the future Prime Minister and Home Minister of India. Ironically, today the wheel of time has run a full circle and former Finance Minister P Chidambaram finds himself in the same position he brought these two politicians to, through CBI cases.

Jaitley’s name will remain in the history of the BJP and the country as the man who promoted Narendra Modi as the BJP’s face for the 2014 parliamentary elections. Together with Manohar Parrikar, he wove the narrative with a vision and in a persuasive manner to declare Modi as the BJP’s prime ministerial candidate. The rest, as they say, is history. It was his eloquence, oratory skills and irrefutable arguments that silenced Modi’s critics. For a long time, Jaitley was the chief troubleshooter for the BJP and Modi during his first stint in the Prime Minister’s Office (PMO).

There’s no doubt that Modi will miss Jaitley’s articulated voice and wisdom as he was the man on whom the Prime Minister used to fall back upon for counsel.

The implementation of the  Goods and Services Tax (GST) will be remembered as Jaitley’s greatest gift to the tax structure and financial reforms in country. With his masterly capability for forging bridges with opponents, he was able to synchronise the diverse interests of the BJP and Opposition-ruled States.

He made GST implementation smooth and later ironed out some of the difficulties that came in its way.  As a Finance Minister he resolved the problem of insolvency of Public Sector Banks (PSBs) and finalised the Insolvency and Bankruptcy Code. These were not mean achievements given that Indian banks were involved in multi-crore scams.

I got an insight into Jaitley’s wisdom in 2004 when he was Law Minister in the Atal Bihari Vajpayee Government and I was Inspector- General of Forests in the Ministry of Environment and Forests. There was a proposal at the behest of the PMO just before the Madhya Pradesh and Lok Sabha elections to frame a roadmap for correcting the historical injustice done to tribals.

Jaitley corrected the Ministry’s note  in the presence of the Prime Minister and made it not only legally sound but had the foresight to see that this roadmap did not become a tool for increasing  encroachments on forest lands.

Such was his vision that he could foresee  events effortlessly. Later, after the defeat of the BJP in 2004, the UPA Government enacted the Forest Right Act 2006 and today it has become a political narrative for all parties. Jaitley, the tallest and brightest BJP leader born post Independence, will be remembered for a long time for what he has done for the party and for the nation. Rest in peace Arun Jaitley!

(The writer is a former civil servant)