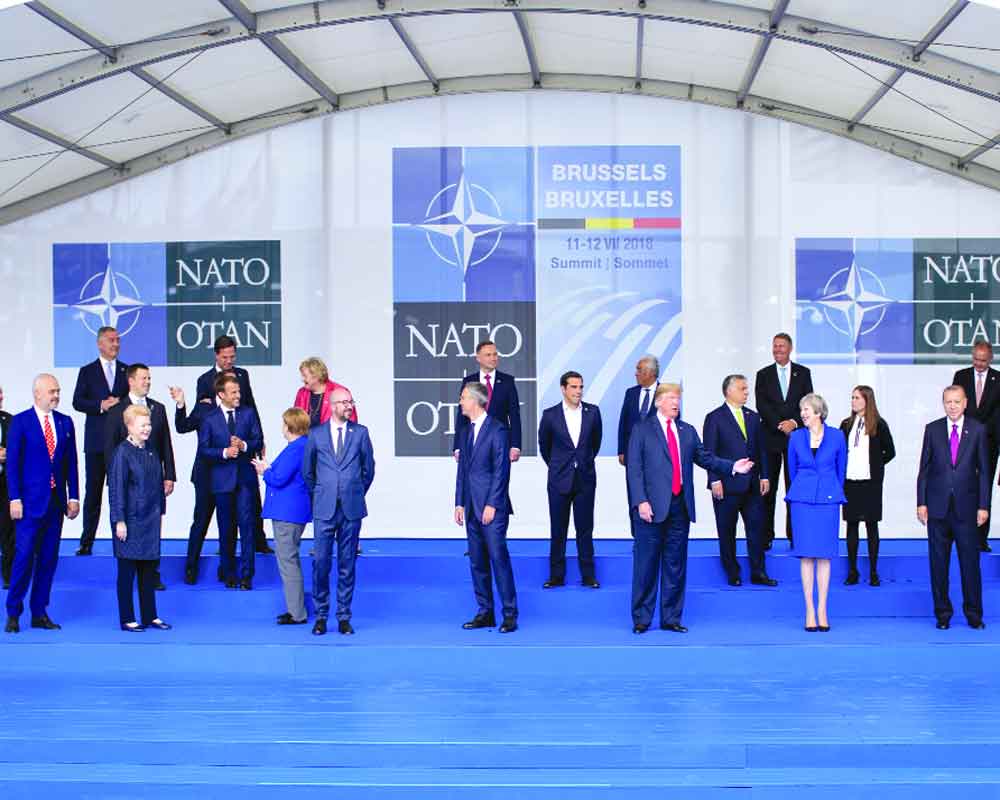 What disturbs most of the NATO allies in Europe is Donald Trump’s public ambivalence about NATO’s value to the US and his questioning of America’s commitment to it. NATO leadership requires a fundamental shift in its thinking to rework its alignment with the rest of the world, especially with the rising powers such as India, China, and Brazil

The North Atlantic Treaty Organization (NATO) that was founded on April 4, 1949 is completing 70 years next month. Unlike many other global alliances and treaties, the NATO’s coming of age needs to be saluted despite all its internal squabbles and external threats. The organisation has 29 members as of today, but with all the possibilities of the Republic of North Macedonia entering the bloc, its

tally may rise up to 30. NATO’s membership is open to “any other European State in a position to further the principles of this Treaty (i.e. North Atlantic Treaty) and to contribute

to the security of the North Atlantic area”.

NATO’s primary aim is to provide a guarantee of security which is considered the key to the well-being of all the members. Further, its purpose is to offer freedom and security of its members through political and military means. But then how to achieve such political means for guaranteeing freedom to its constituents is the moot point. When it comes to political means, NATO promotes democratic values and enables members to consult and cooperate on defence and security related issues to solve problems, build trust, and in the long run prevent conflict. While offering military means, the organisation’s basic premises say that it is committed to the peaceful resolution of disputes. If diplomatic efforts fail, the alliance has the consolidated military power to undertake crisis-management operations to safeguard its member states. In the event of such emergencies, the operations are carried out under the collective defence clause of NATO’s founding treaty i.e. Article 5 of the Washington Treaty or under a UN mandate, alone or in cooperation with other countries and respective global organisations.

Now, when NATO is turning 70, the Secretary-General of the NATO, Jens Stoltenberg, proudly proclaims, “NATO is the strongest, most successful alliance in history, because we have been able to change.”

Though his pronouncements are too high, the alliance has demonstrated its survival skill since the post-World War II through the breakdown of the USSR, the end of the Cold War. Beyond the Cold War, NATO has been successful in projecting the US, one of its prime members, as the centre of the unipolar world. It has expanded from 12 member countries to a tally of 29 as of today. Whereas, the

In fact, seven of its eight founding members eventually have joined NATO after the breakdown of the USSR. Thus, NATO has adjusted itself to the demands of changing times.

A research study on “63 prominent military alliances” over the last five centuries conducted by the Washington-based Brookings Institution in 2010 shows that only 10 of them survived beyond 40 years. And most importantly, the average lifespan of such collective defence alliances was a mere one and a half decade. In that case, NATO has come of age with its own capacity to reinvent itself through decades.

Precisely, today NATO’s biggest single challenge is the absence of a concerted leadership at the helm of affairs in the US. With an unpredictable leader like Donald Trump, no single organisation wherein America has its stake is safe under him. He himself is highly confused as he is not been able to steer the country ahead. Simply put, NATO leadership demands a fundamental shift in its thinking to rework its alignment with the rest of the world, especially with the rising powers such as India, China, and Brazil.

Currently, all big players at the top of NATO leadership are plagued with their own domestic issues: an America largely disturbed by Trump’s “make America great again” and a vastly divided Republicans and Democrats in the Congress and outside, Britain by its looming Brexit crisis with Prime Minister Theresa May shortly leaving, France by Gilets Janunes protests and Emmanuel Macron moving almost nowhere with his grand vision of the remaking of Europe, Germany with an aging and retiring Angela Merkel, Italy by populists and economic showdown, and finally, Turkey under the autocratic strangleholds of Recep Tayyip Erdogan.

Another catastrophe that may soon (already) influence the strategic vision of the NATO is the resurgence of Vladimir Putin in Russia. His ambitions and the grand project of reviving Russia may obviously disturb NATO’s alignments in the entire Europe. And also, a decaying ISIS and Russia’s hyper-active war game in the West Asian region demands NATO’s new line of thinking both to offer a safety umbrella to its member states around and to redesign its geo-political skills to convince its allies that it’s a relevant force and can strike back hard when required.

Much more than all these, there are other two critical issues that currently deserves attention from NATO leadership: first is an ever-rising China under Xi Jinping, and second is a fast emerging institutional decay of global liberal democracies and in public discourse, a strong approval for authoritarian populists across the globe. With China stretching its economic leverages around, Washington has started turning its attention towards the Pacific and to the East; certainly its sincerity towards the transatlantic alliance would suffer in the days to come. Trump is too busy with a recalcitrant Kim in Pyongyang to see that finally peace is achieved in the Korean peninsula and war clouds of a nuclear power comes to an end. But then, more than Trump engaging with Kim, his entire administration is busy in a mega crisis borne out of a protracted trade war with Beijing. It’s not only about pushing China towards a sanction regime, but also about alerting the whole West about its secret games around the far-reaching 5G technology. Only time will tell, how to stop a rising China with its imperial designs and to readjust America’s priorities while staying in on the NATO.

Are all its members hopeful about a Trump Administration that may restore faith on the NATO and its constituents at this juncture? It seems problematic for pragmatists, brushing aside the new world of NATO painted by the rest. Trump is the first US President who viewed the EU as an economic competitor rather than a critical partner of America and the NATO. His troubling anti-NATO and the anti-Europe antics have forced the European nations to question the credibility of America as the pioneer of the West for the first time since the Second World War.

Today, the confidence level of the European public over the US leadership is at its historic low. The reasons behind are simple: earlier all American Presidents used to encourage a longstanding relationship and bond of unity between the US and Europe. Only Trump has diverted from this historic journey and as long as he remains in power, he may even damage the alliance further. He publicly claims that the NATO allies are taking advantage of the US. But he must remember that these are the same old allies that came up to the defence of America after 9/11 terror attack, lost thousands of soldiers in the battlefields of Afghanistan since 2003, are fighting the monstrous ISIS and global terror around the world together and in the past shared the burden of bringing peace in the Balkans. What disturbs most of the NATO allies in Europe is Trump’s public ambivalence about NATO’s value to the US and his questioning of America’s commitment towards Article 5 of the original charter of the alliance. But there are good reasons for which the NATO would survive Trump. It has seen ups and downs throughout its long span of life.

What plagues the NATO is that all its member countries are not equally bothered by either the rise of China, a nuclear Pyongyang and a decaying ISIS. Hence, there must come up a “new transatlantic bargain” between the US and NATO’s European allies as Stephen Walt of Harvard Kennedy School of Government argues. And in this, “America agrees to stay on in Europe, but at a reduced level of engagement; the Europeans agree to up their game in their own region and take on board America’s concerns over China on trade and intellectual property”. This kind of a grand resetting in alliance between America and European allies within the NATO may indicate both sense and sensibility for a seven-decade old organisation. Though such possibilities are too dim, temptations for such reorientations are not far off. Experts say that this septuagenarian is due for a metamorphosis, looking at the changing political, economic and cultural shocks brought by an inescapable wave of globalisation in a “Flat World” and for maintaining its omnipotence in a world crucially influenced by the new realities and horrors of an Islamic jehad. Nevertheless, despite its intricacies within and threats ranging from outside, the international community should not underestimate NATO’s ability to usher in a changed world.