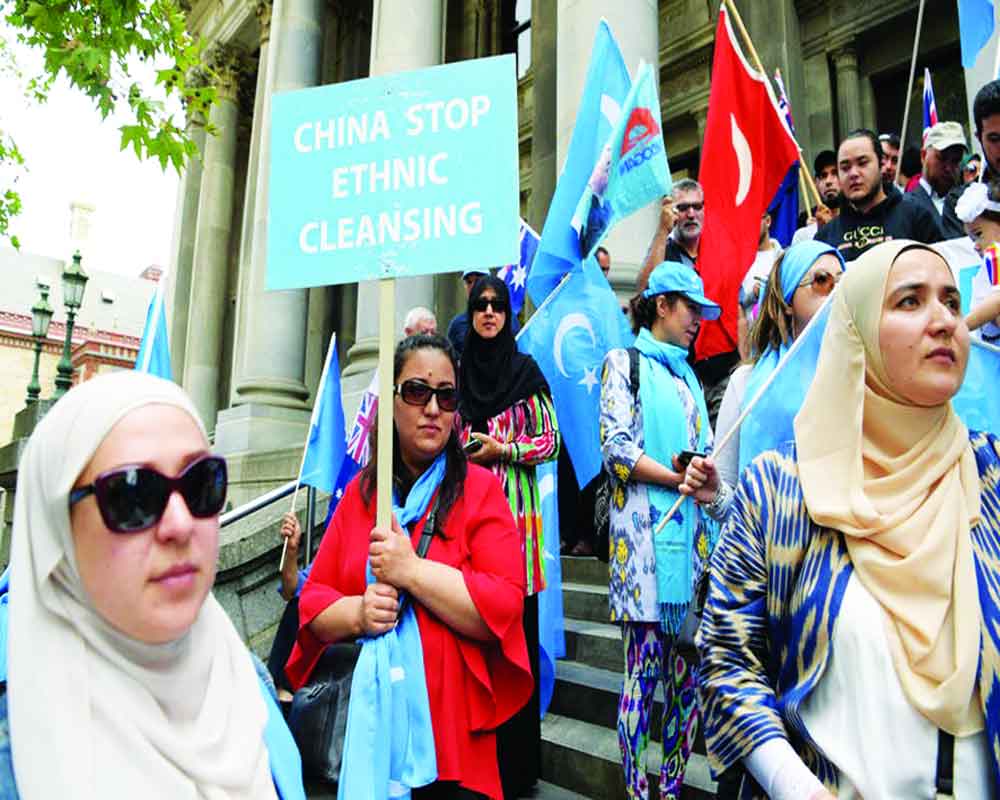 The deafening silence of nations towards the oppressed Muslims in China exposes a potent combination of greed, fear and insincerity that has been guiding them

There is a deafening silence that surrounds the ongoing fate of the beleaguered Uighurs, incarcerated in Chinese detention centres. This indifference is especially ironical from the affluent Gulf sheikhdoms, who themselves cry hoarse on issues like Palestine, Rohingya, Bosnia or even Kashmir, albeit, unsuccessfully. Countries like Saudi Arabia, who have used religion to legitimise their own regime, political standing and global efforts pertaining to the matters of Ummah, are conspicuous by their feeble and pusillanimous stand against the Chinese for their treatment of the Uighur Muslims. Even the theoretically-powerful multilateral forum (world’s second-largest organisation with 57 member countries representing 1.8 billion people) like the Organisation of Islamic Cooperation (OIC), which positions itself as “the collective voice of the Muslim world”, has been equally fearful of slamming Beijing.

On the contrary, the OIC had incredulously passed a resolution at the Abu Dhabi declaration to “commend the efforts of the People’s Republic of China in providing care to its Muslim citizens.” Whereas voluble and belligerent nations like Pakistan, who are virtually surviving (economically and diplomatically) on the Chinese doles and bail-out packages, are expectedly mum on the Uighur affairs and are only selectively pitching Kashmir. Matters like the fate of the besieged and oppressed co-religionists like the Uighurs are not allowed to vitiate the “all-weather friendship” with China. On the contrary, it was left to the 22-odd countries, including Australia, Canada, Japan, the UK, France, Germany and the US among others, to jointly write to the United Nations Human Rights Council (UNHRC) stating: “We also call on China to refrain from the arbitrary detention and restrictions on freedom of movement of Uighurs, and other Muslim and minority communities in Xinjiang.”

The undeniable reality is that a lot of public posturing, cause-espousal and haranguing that is routinely done by Islamic countries is only on account of convenience, selfish considerations and not on account of morality or conscience. As Pakistan wraps itself up as the self-appointed custodian of the Kashmiris, its embarrassing silence on the Uighurs and the state-sponsored complicity against its own Balouch populace or other minority denominations like Hindus, Christians and even the sectarian “others”, like the Shias and the Ahmediyas among others, makes a mockery of its self-righteousness. Pakistan’s patent two-facedness has earned it the ire of its own Islamic neighbours like Iran and Afghanistan.

Even though Pakistanis play up the rote “brother-Islamic-nation” card with both Iran and Afghanistan, the former fumes at the sectarian intolerance that is “allowed” within Pakistan, whereas the Afghans bristle at the active support that Islamabad bestows on Afghan-facing terror organisations. Whereas “Kashmir” unites the polity of Pakistan like nothing else can, it is the singular societal unifier that legitimises the unwarrantedly generous budgets of the Pakistani military. The poison of the Pakistani clergy emerges as the pivotal rallying cry for Pakistani civil politicians. “Kashmir” is the ultimate weapon of distraction that can sway mood, deflect attention and cobble together the semblance of a unified nation. No such tears are even pretended on the hapless Uighurs even though the situation, treatment and Constitutional status of the Kashmiris and Uighurs cannot even be compared. Kashmiris are entitled to all Constitutional rights, guarantees and opportunities as is applicable to others.

Clearly, realpolitik and commerce overrides all other considerations in the Middle East. China is the high-temple of transactional relationships and is flexing its “scale” muscle to extract its own pound of flesh. Beyond beholden or vassal nations like Pakistan (owing to the $60 billion China–Pakistan Economic Corridor investment) or pathologically anti-US countries like Iran for whom China has a natural traction, others like Saudi Arabia, the UAE, Kuwait and Qatar are engaged in very high-stakes trade and commerce with Beijing. That is perennially at the risk of earning China’s ire, should these countries speak out against the Uighurs.

Reciprocally, China never expresses any concern with state actions like the Jamal Khashoggi episode, Balouch insurgency or other human right issues in the region. It is a mutually-beneficial silence maintained by both China and these nations that selectively bury some issues like the blatant Uighur exploitation, while allowing for some others.

Even when the United Nation forums were taking up the Uighur issue against China (often by Western powers on account of their own realpolitik considerations against China), the visiting Saudi Arabian Crown Prince Mohammad Bin Salman endorsed the Chinese “counter-terrorism” strategy against the Uighurs in Xinjiang by stating, “We respect and support China’s rights to take counter-terrorism and de-extremism measures to safeguard national security. We stand ready to strengthen cooperation with China”. He added for good measure that the Saudis oppose “interference by external forces in China’s internal affairs.”

Shortly thereafter, a multi-billion Saudi-Chinese oil deal and agreement to partake in the gargantuan “One Belt, One Road” initiative was promptly confirmed. Independent bodies have consistently called the bluff on Chinese camps that forcibly host up to one million Uighurs in what the Chinese regime calls “boarding schools”, “vocational centres” and even “re-education centres”. Independent researchers have described the same as “wartime concentration camps” that are part of a “systematic campaign of social re-engineering and cultural genocide.”

Reports of torture, forced sterilisation and political re-education are commonplace, yet there is not a twitch of condemnation from major Islamic nations. Already, the Chinese have brazenly forbidden people from practising Islam in certain areas and banned elements of religiosity like keeping fasts, wearing hijab, growing a beard or even retaining “Muslim” sounding names. The Chinese Government has openly announced its five-year to “Sinicize” Islam via a virtual denouncement of religion. The ingenuous attempt to “guide Islam to be compatible with socialism and implement measures to Sinicize the religion” is a barely concealed socio-cultural genocide that has escaped any tangible condemnation from Islamic nations. The sheer hypocrisy of silence surrounding Uighur suppression exposes a potent combination of greed, fear and insincerity that guides some of these nations, who often shroud themselves with fake emotions about issues that do not earn them either petrodollars or the wrath of countries like China.