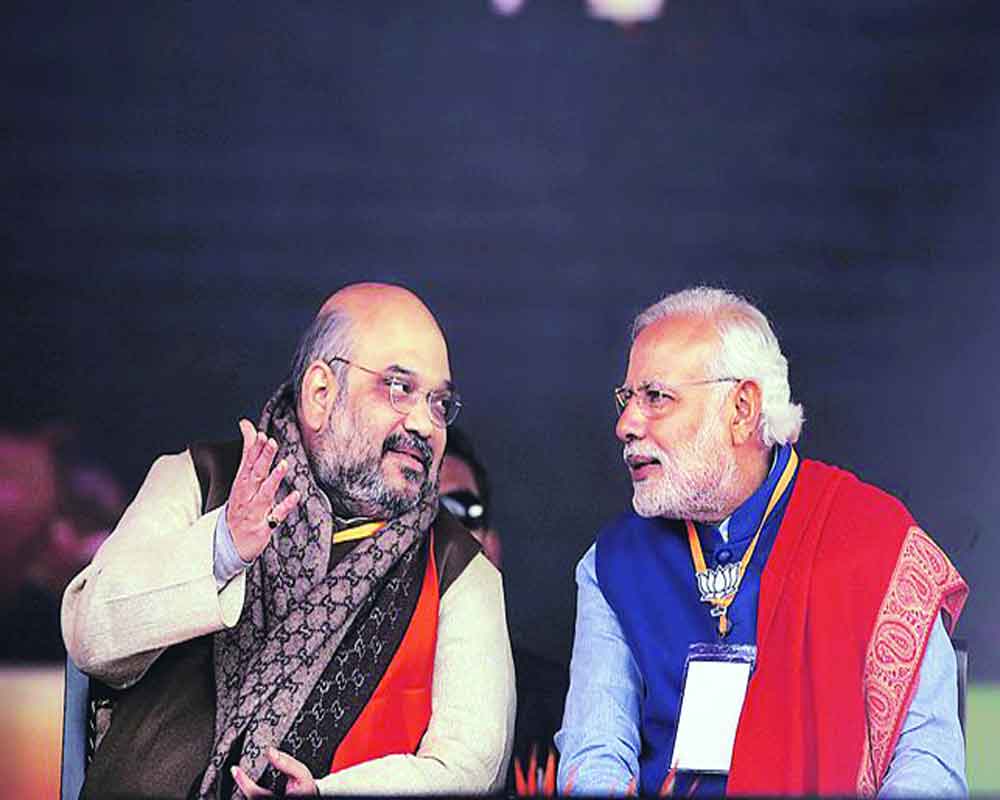 Some BJP leaders claim that after the Pulwama and Balakot incidents, the party is certain of victory, although the Opposition is trying to ensure that their path is not without hurdles. This is thought to be the reason behind the BJP’s “surrender” before smaller parties, in the hope of forging alliances

Prime Minister Narendra Modi and Amit Shah are brimming with confidence in the run-up to elections. Some BJP leaders claim that after the Pulwama and Balakot incidents, the party is certain of victory, although the Opposition is trying to ensure that their path is not without hurdles. This is thought to be the reason behind the BJP’s “surrender” before smaller parties, in the hope of forging alliances. A case in point being Jharkhand, where the BJP has left one Lok Sabha seat for its partner, the All Jharkhand Students Union (AJSU). Not long ago, it was being said that the BJP was not in the mood to kneel before the AJSU, and Amit Shah had asked its leaders to either merge into the BJP or fight alone. But in no time, the BJP changed tack and left the Giridih seat for the AJSU. This indicates that the BJP needs strong alliances to fight against a strong Opposition.

That is why the BJP has gone into alliances with its old partners in States like Bihar, Jharkhand, Maharashtra, Tamil Nadu, and Punjab — and compromised everywhere. In Maharashtra, the BJP changed its old formula and agreed to fight on 25 seats instead of 26. Before this, the BJP used to fight on 26 seats, and the Shiv Sena got 22 seats. But this time, the Sena has managed to get 23 seats in its kitty. In the same manner, the JDU — which has only two MPs — has got 17 seats. In Tamil Nadu, the BJP had to make do with only five seats, while in UP, it has tried its best to continue with both partners.

THE CASE OF SECOND SEAT

The preferred seats of Narendra Modi and Rahul Gandhi have been revealed. The Congress recently released a list of 15 candidates in UP, and Rahul is set to fight from his conventional seats, Amethi. In the recently held meeting of the BJP’s Parliamentary Board, Modi’s candidature was also fixed. He will fight from Varanasi again. It is being said that both leaders will fight from at least one more seat. The last time too, Modi had fought from two seats — Varanasi and Vadodara, leaving the latter later. There is speculation that he will contest from Vadodara this time around, but seats from other States are also on the discussion table. Puri seat is the most talked about for PM Modi. The BJP leaders feel that if Modi fights from Odisha, the party will benefit in the Lok Sabha as well as Assembly Elections. Some time ago, it was being said that Modi might fight from Patna Sahib too, but that speculation is now over.

On the other hand, Rahul has won from Amethi thrice and not fought from any other State. This time, there is speculation that he will contest from a seat from a Southern State. His mother and grandmother have both fought from South India. The Congress leaders feel that if Rahul fights from some other State also, the party prospects could be better. Though it is also true that the Congress is very weak in Andhra Pradesh and Telangana, but in the other three States, it has forged strong alliances. That is why the party is also mulling over a State either from North or West India for Rahul to contest.

MULAYAM KIN IN THE RACE

This time, some more members of Mulayam Singh Yadav’s family will fight the Lok Sabha Elections. In 2004, the number was four: Mulayam had fought from two seats, Mainpuri and Azamgarh. Apart from him, Mulayam’s daughter-in-law Dimple Yadav had fought from Kannauj, nephew Dharmendra Yadav from Budaun, and grandson Akshay Yadav from Firozabad. The SP was able to win only these five seats. Later, Mulayam had left the Mainpuri seat and his grandson Tej Pratap Yadav fought from there and won. Then Tej Pratap became the son-in-law of Lalu Yadav. This time, Mulayam will fight from only Mainpuri seat. So, Akhilesh Yadav will have to find another seat for Tej Pratap. The SP has released a list of nine candidates, which has four members of the Mulayam family. Mulayam will fight from Mainpuri, Dimple from Kannauj, Dharmendra from Budaun, and Akshay from Firozabad. Earlier, Akhilesh had said that his wife would not fight this time and he would contest from Kannauj. But, at last, he has roped in his wife. It is being said that he might fight the Lok Sabha Elections. Apart from the seats, which are said to be the den of the Yadav family, two other seats are also Yadav dominated and the SP has a strong vote base there. That is why there is speculation that Akhilesh might either fight from Azamgarh or Sambhal. These two seats might go to Akhilesh and Tej Pratap. Shivpal Yadav has formed a separate party and is gearing up to fight elections. He could be the seventh member of Mulayam’s family to contest this time.

Many top leaders of the country are trying to break the ice between the BSP and Congress. Even the SP’s supremo, Akhilesh, wants to take the Congress on board. The Opposition leaders are considering it necessary not only for UP but for the entire country. But Mayawati is not paying heed to anyone and has announced solo fight in many States. In Haryana, she has tied up with Raj Kumar Saini’s party, the LSP. She is gearing up to go alone in Chhattisgarh, Madhya Pradesh, Rajasthan, Maharashtra, Punjab, Karnataka, and Delhi. It is no secret that Mayawati is miffed with the Congress. She feels that Rahul’s party is trying to usurp its vote bank. She is upset with the Congress politics in UP.

In fact, Dalit, Brahmins, and Muslims have been the conventional vote bank of the Congress. The BSP has also made these three vote banks its own at different times. Now, when the Congress has roped in Priyanka Gandhi Vadra, Mayawati feels that its vote bank could shrink. Recently, Priyanka managed to persuade Dalit leader, Savitribai Phule, to join the Congress, and this has made Mayawati angrier.

A few months ago, the Congress formed a committee to talk with probable partners and finalise alliances. AK Antony was the chairman of this committee. Apart from Antony, Ahmed Patel, Ghulam Nabi Azad, and Ashok Gehlot were also a part of the committee. Now, when the Lok Sabha Elections have been announced, questions are being raised over what the committee has done. Did the committee and its members talk to any of the alliance partners in any State? Did they try to search for new partners? When all decisions regarding alliances are being taken either by the General Secretary or Rahul, then what was the need of this committee? Rahul is talking with all parties regarding alliances. Many Congress leaders are not happy with this strategy and say that all negotiations must be done by other leaders and Rahul should come into the picture only in the final stage. However, Rahul has his own style of working. He wants to hold alliance talks, like he did with Tejashwi Yadav in Bihar.

In Maharashtra also, Rahul held discussions with the NCP leader Sharad Pawar. They had four rounds of talks over the seat-sharing formula. Rahul also talked to Sitaram Yechury over seat sharing. Where Rahul didn’t talk directly, his general secretaries stepped in. Even then, the AK Antony-led alliance committee was not roped in at any stage.