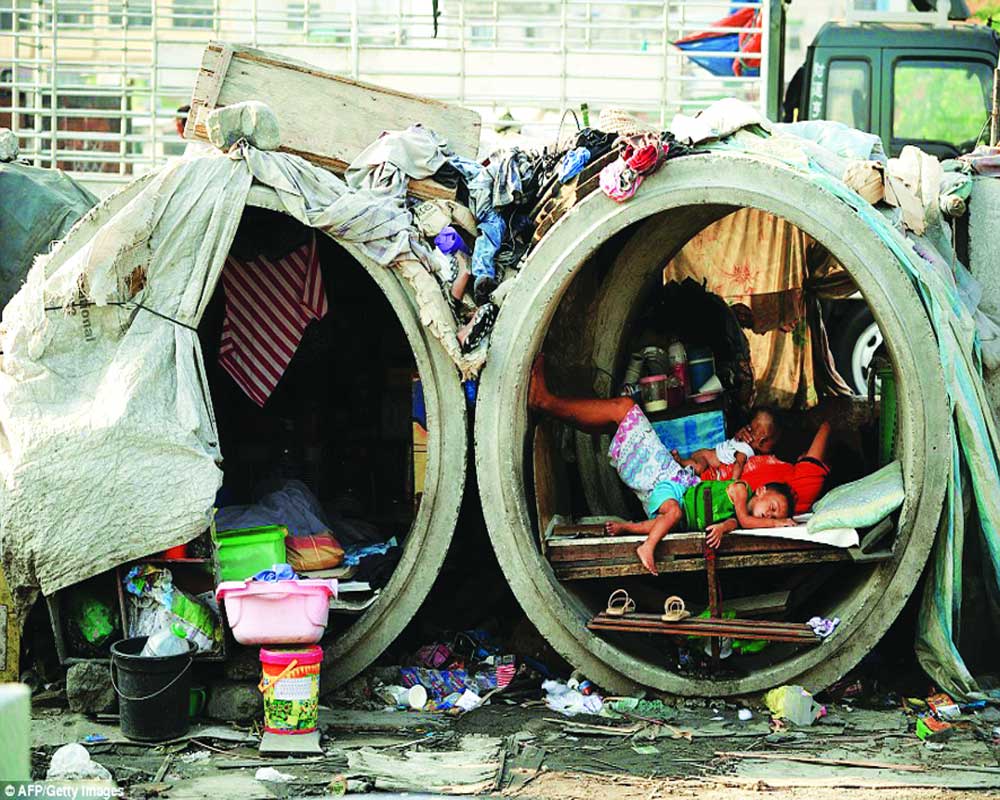 Homelessness is a big challenge. A decent shelter for the poor can catalyse overall economic growth and micro-housing is one way to do this

One of the most challenging problems of our times is homelessness. While we continue to record improvements in dealing with poverty, homelessness has elicited but an unimaginative response from policy doctors. The apathetic approach of successive Governments is symptomatic of the disease that ails India’s housing system.

A decent habitat and shelter for the underprivileged can contribute not just to their well-being but also catalyse overall economic growth. It is thus critical to recognise housing investment as a basic, fundamental building block of economic activity. There is nothing more critical to a family’s quality of life than a healthy, safe living space. Sustainable and inclusive housing solutions could bolster economic growth quickly and efficiently and hence should be given priority over education and health.

Housing is not a standalone issue: It is closely intertwined with and often the cause of a slew of health and developmental problems. Poor ventilation and inability to maintain basic hygiene are major causes of poor health. Fragile building structures undermine safety and vastly increase vulnerability to disaster. Lack of lighting and space limits the ability of children to study. Inadequate privacy and lack of sanitation contribute to a host of diseases, thereby perpetuating poverty.

For many people in the developing world, the land on which they live is their only asset. If that property is not publicly recognised as belonging to them, they lose out on social benefits.

Land ownership is often the bedrock of other development interventions: Owning land boosts nutrition, educational outcomes and gender equality. The converse is equally true. Where land security is absent or weak — that is, when men and women do not receive recognised legal rights to their land and can thus be easily displaced without recourse — development efforts flounder, undermining conservation efforts, seeding injustice and conflict and frustrating efforts to escape poverty.

For most of India’s poor and the vulnerable, secure property rights, including land tenure, make for a rare accessible luxury. Many who live in slums have little to no control over or ownership of the property they live on. The lack of official land titles is a major impediment to the acquisition of housing finance. People do not have documentary proof of being owners of the piece of land on which they live and are, therefore, legally insecure. Many low-income villagers have owned their land for generations. The formal financial sector is unable to serve them. Once titled, they could obtain access to several public benefits including loans.

Lack of ownership rights deprives people of basic amenities. Once titled, they can obtain access to several Government benefits. Even a small plot can lift a family out of extreme poverty.

Millions of urban citizens remain off the map, with the Government failing to extend basic services to slum residents by using the concept of opportunistic influx—the idea that the provision of services might encourage greater migration from rural areas — thereby paradoxically increasing urban deprivation.

Traditional housing finance has not offered products tailored to low-income people but a range of financial institutions is applying good microfinance practices to housing finance. This is allowing them to successfully deliver much-needed services to  economically weaker customers. Successful housing micro-finance providers have married the core principles of the micro-credit movement — peer-based borrower selection and repayment enforcement, close follow-up on repayment and so on — with the technical expertise required to investigate land ownership.

In response to the non-availability of tangible collateral from low-income households, as required by the formal financial sector, a new stream of lending has emerged, called housing micro-finance. Institutionalised micro-finance systems have come up with innovative solutions.

These draw on the best practices in micro-finance but remain adapted to the classical housing finance paradigm. This has been highly successful wherever Governments are offering long-term tenancies and shared-ownership housing in a supportive context. But the sector is still in need of a more sustainable business model to grow.

Housing micro-finance is broadly defined as small, non-mortgage-backed loans dedicated to housing activities, offered in sequences to support the incremental building practices of low-income populations. It can include a range of financial services that support improving or upgrading housing such as home repair and expansions, additional cooking space, water and sanitation services, energy efficiency upgrades, the purchase of inhabitable land or permanent structures and the construction of new housing.

The demand for housing micro-finance is high. Clients already channelise a good portion of micro-enterprise loans to home improvement. Micro-entrepreneurs often use their homes as productive assets in generating income. A home can be a place to store inventory, produce goods and run a business. A home is a personal asset that usually appreciates in value over time. Home improvement, thus, not only enhances living conditions but is also an investment.

The housing sector demands a high level of creativity. There is a lot to be done across a range of policy areas to improve the functioning of different aspects of our housing system. The conventional bureaucratic approach and thinking of business-as-usual can merely scratch the surface of the problem. The stresses are mounting fast and India needs to start talking very seriously about the elephant in the room. For any planned interventions to be successful, hard-coded timelines are required. These timelines should be insulated from political turbulence.

One major cause of India’s aggravating problem is the weak legal structure for handling rental housing. According to census data, the share of rental housing in total housing fell from 54 per cent in 1961 to 28 per cent in 2011. That year, despite a severe shortage of rental housing, 11.09 million urban properties remained vacant across India. In most States in India, traditionally, rent control laws have disproportionately protected the tenant. Consequently, we have the paradoxical situation of unsatisfied demand for rental housing while many units lie vacant.

It is time the Government puts rental housing to use. Its share in overall housing has been steadily declining. There is clearly need for replacing current rent control laws with a modern tenancy law, which would give full freedom to tenants and owners to negotiate the rent and the length of the lease. Rules with respect to eviction also need to be reformed to restore balance between the rights of  tenants and the owners.

The leadership class repeatedly turns to policies that sound appealing but are doomed to fail. Then their failure ensures that the country won’t face the issue head on. The lack of enthusiasm and attention from actors in the ecosystem that has surrounded affordable housing has been quite dispirited. There have been remarkably lukewarm endorsements from many of the very people who dreamed up the new policies.

Policy-makers, financial institutions and housing experts need to evaluate their current policies, cultures, and ways of working. With a thoughtful approach, they can be better prepared to tackle this humongous problem. The country’s impressive economic growth must translate to faster progress in this critical area. The Government will have to change course and shift away from the legacy mindset before the problem gets out of hand.

(The writer is Member, NITI Aayog’s National Committee on Financial Literacy and Inclusion for Women)