Cancelled talks and after

Cancelled talks and after 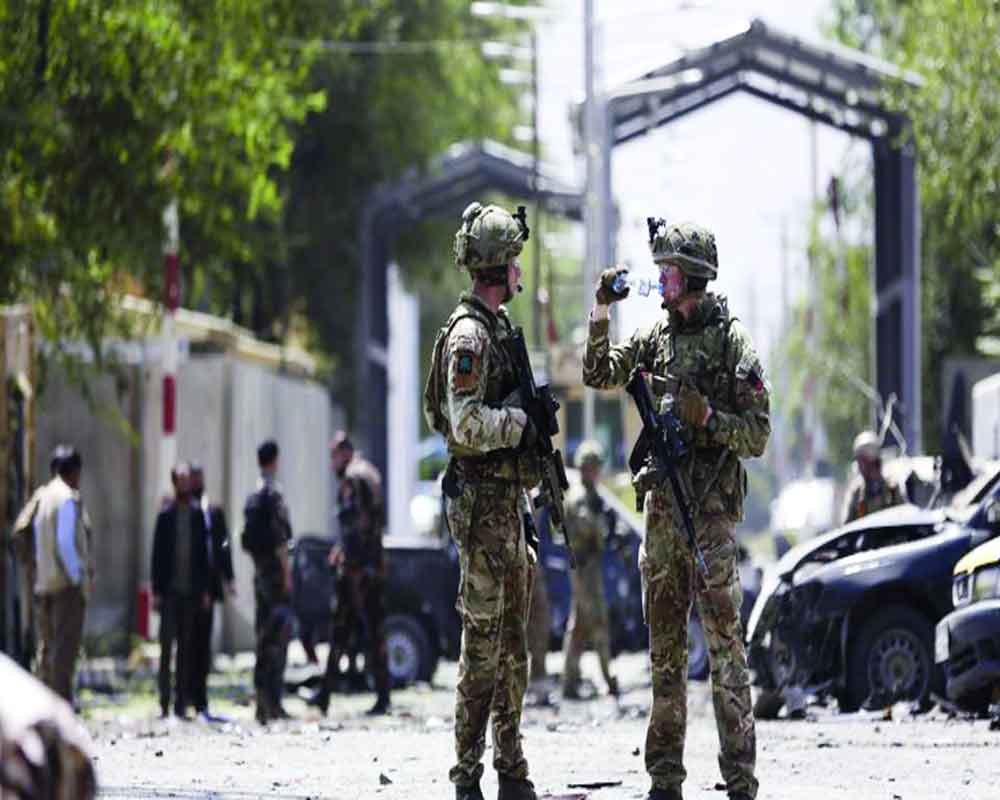 Trump must realise that the Afghan war can end either in a complete victory for the US and destruction of the Taliban or an ignominious defeat for America. There is no third way

On September 7, US President Donald Trump announced the cancellation of the secret summit in Camp David, his private retreat in Maryland, attributing his decision to a terror attack in Kabul on September 5, which killed 12 people, including a US soldier. At the summit, to have been held on September 8, President Trump was to have had separate talks with President Ashraf Ghani of Afghanistan and “major leaders” (his words) of the Taliban. Then he told White House reporters on September 9, “As far as I’m concerned, they [the talks] are dead.”

What happens now to the peace process, which had stretched over nine meetings, between representatives of the US and the Taliban at Doha? One which had reportedly yielded a draft peace agreement, which included the provision that the US would withdraw 5,400 troops in 20 weeks while the Taliban gave the guarantee that Afghanistan would never again be allowed to become a base for terrorism? The draft agreement, reportedly hammered out shortly before the summit, was expected to have been adopted at it and made public thereafter.

The prospects of the peace process going anywhere in the near future are now dim. President Trump has said in a series of tweets, “If they cannot agree to ceasefire during these very important peace talks, and would even kill 12 innocent people, then they probably don’t have the power to negotiate a meaningful agreement anyway.” The Taliban have also reacted sharply. Their spokesman, Zabiullah Mujahid, told the AFP on September 10, “We had two ways to end (sic) occupation in Afghanistan, one was jihad and fighting, the other was talks and negotiations. If Trump wants to stop talks, we will take the first way and they will soon regret it.” In fact, the fighting has already started — a development underlined by President Trump’s statement that the US military’s onslaught on the Taliban guerrillas was at its fiercest level in a decade.

Will this daunt the Taliban? Imtiaz Gul, author of The Al Qaeda Connection: The Taliban and Terror in Pakistan’s Tribal Areas and The Most Dangerous Place: Pakistan’s Lawless Frontier, referred in an article in The Times of India dated February 6, 2010, to a $ 500 million fund established to woo the Taliban. He said that it would not help because the majority of Taliban fighters, “a rag-tag army of a few thousand, take up arms out of commitment and not for economic considerations.”

What goes for money, goes for military force. The Taliban’s commitment to their cause, which prepares them for sacrificing their lives, is boosted by their conviction that ultimate victory will be theirs as sooner than later, the Americans will leave following an agreement carrying the stamp of a Taliban victory. Releasing the Taliban’s post-talk-cancellation statement, Zabiullah Mujahid reiterated the militia’s belief that the Americans will come back to the discussion table. He added, “Our fight for the past 18 years should have proven to the Americans that we will not be satisfied until we witness the complete end of the occupation.”

Hence, President Trump should realise that the Afghan war can end either in a complete victory for the US and destruction of the Taliban or an ignominious defeat for Washington, DC. There is no third way. Also, he must understand that the main reason for the Taliban’s gains in Afghanistan has been the extraordinary nature of American involvement, which can only be described as fighting the war and yet not fighting it. This has manifested itself on the ground in periodic enhancement of its presence in terms of men, armament and material and/or unleashing of military offensives and yet not pressing for conclusive victory and allowing its initiatives to lose momentum. On each occasion, this has enabled the Taliban and Al Qaeda (before its waning) to come back fighting.

It all started with the US-led offensive that began in Afghanistan in October, 2001, following 9/11. By December 2001, it had thrown the Taliban and Al Qaeda out of Afghanistan lock, stock and barrel. Unfortunately, the invasion of Iraq, which began on March 19, 2003, led to the shifting of a large number of American military personnel as well as critical weaponry and equipment from Afghanistan to Iraq. This weakened the US’ presence in Afghanistan, as did the diversion of George Bush Jr’s administration’s (2000-2008) attention to Iraq, relegating the Afghan War to the back burner. As a result, American commanders were denied the manpower and resources that they badly needed to win in Afghanistan. Recognising its opportunity, the Taliban, which was regaining its strength in safe havens in Pakistan, provided by the latter’s Inter-Service Intelligence (ISI) Directorate, began to push back in Afghanistan from 2005.

Any argument that the Taliban cannot absorb punishment indefinitely and their commitment would eventually wear thin, does not wash. It did not weaken after they were trounced in 2001. They have to be defeated and not allowed to stage a comeback through continued military presence. All this will cost continued loss of American lives and money. Can Washington, DC afford it? Can the US make the kind of military effort required to defeat the Taliban?

For an answer to the first question, one must begin with analysing the consequences of a Taliban victory. To begin with, what would it mean for Afghanistan? Announcing his new policy on Afghanistan and Pakistan on March 27, 2009, the then US President Barack Obama had said, “For the Afghan people, a return to Taliban rule would condemn their country to brutal governance, international isolation, a paralysed economy, and the denial of basic human rights to the Afghan people — especially women and girls.” This holds true even now. The Taliban have not changed their spots.

As to the consequences for the US, one must first consider what would happen to the jihadi world and the Taliban. The former, in bit of a disarray following the rout of the Islamic State in West Asia and the fading of the Al Qaeda, would receive a massive shot in the arm from a Taliban victory. More, gaining immensely in prestige, the Taliban would emerge as the jihadi world’s heroes, attracting to themselves the remnants of jihadi groups scattered globally — leading to the rise of a massive, united jihadi movement under their leadership and committed to enforcing Sharia rule worldwide by force. A resurgent burst of terror attacks would then hit the US and the West.