Caught in a limbo

Caught in a limbo 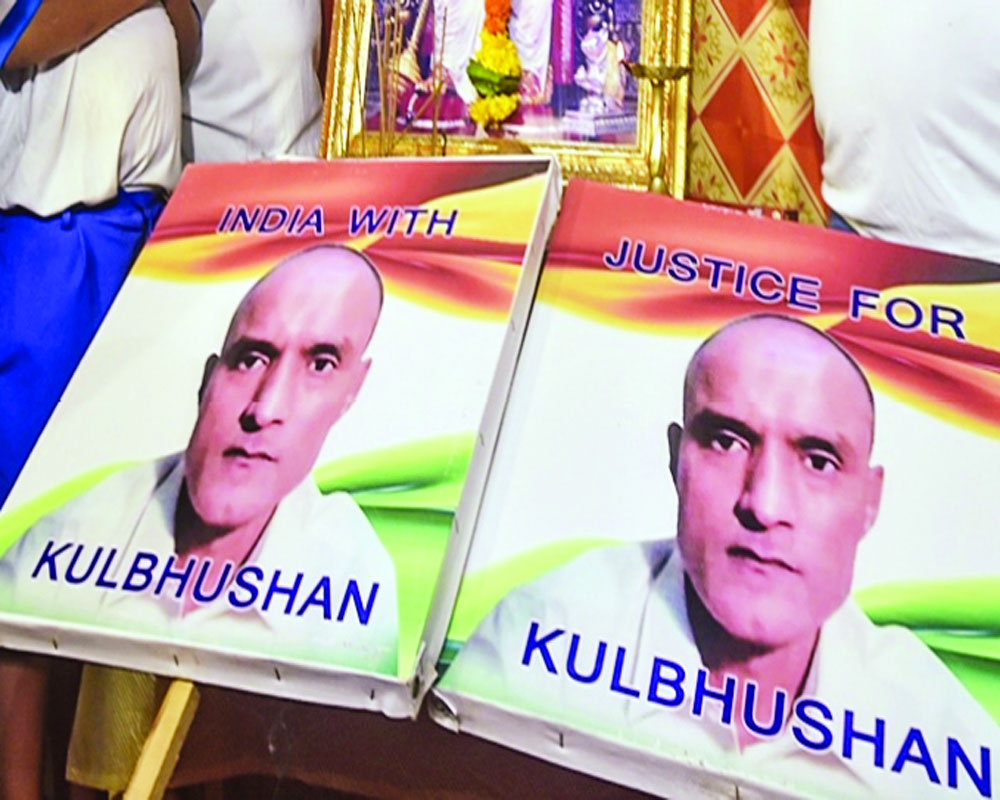 In all matters of substance, the ICJ ruled in favour of India. As much as it brought relief, concerns regarding Jadhav’s release remain as the ball is now in Pak’s court

Faced with the near unanimous verdict of the International Court of Justice (ICJ) (15:1) on the imprisonment of India’s former Naval officer, Islamabad buckled on July 19, 2019, and informed Commander Kulbhushan Jadhav of his rights under Article 36 of the Vienna Convention on Consular Relations, 1963, and promised consular access. It follows that Pakistan has also accepted the ICJ’s directive to stay Jadhav’s execution until the judicial process is reviewed in a fair and transparent manner, bringing huge relief to his family and to India, though concerns for his future remain high.

There is still no clarity that Pakistan will allow retrial in a civilian court. Its leaders tried to hype the fact that the court rejected India’s plea for annulling the military court’s conviction of Jadhav and ordering his release and safe repatriation to India. But that is because the ICJ is not an appellate criminal court. Its jurisdiction was based on Article I of the Optional Protocol, which is limited to interpretation or application of the Vienna Convention, and Pakistan’s breach of its obligations under Article 36 thereof. In all matters of substance, the ICJ ruled in favour of India.

According to Pakistan’s narrative, Jadhav was arrested on March 3, 2016, while engaging in acts of espionage and terrorism on behalf of India, in Pakistani Balochistan, which he entered illegally from Iran. He allegedly held an Indian passport in the name of “Hussein Mubarak Patel.” India countered that Jadhav was kidnapped from Iran, where he was running a private business after retirement. India was informed of the arrest only on March 25, 2016, and immediately demanded consular access, a plea it repeated several times, in vain.

Pakistan obtained a “confession” (July 22, 2016), and Jadhav was tried before a Field General Court Martial under Section 59 of the Pakistan Army Act of 1952 and Section 3 of the Official Secrets Act of 1923. Throughout this process and even after Jadhav was sentenced to death (April 10, 2017), India was denied consular access. However, Jadhav’s wife and mother were permitted to meet him on December 25, 2017, under humiliating conditions (his wife was forced to remove her mangalsutra and bangles, the auspicious symbols of married life), and under intimidating scrutiny from Pakistani officials, who remained present throughout. The poor Commander barely spoke and appeared to be under great physical and mental stress.

Finally, India approached the ICJ (May 8, 2017), alleging violations of the Vienna Convention under Article 36 (1) and Article I of the Optional Protocol concerning Compulsory Settlement of Disputes. It won an early reprieve when the court (May 18, 2017) asked Pakistan not to execute Jadhav until the hearing was complete. Astonished at this victory secured by senior advocate Harish Salve, Pakistan chose judge Tassaduq Hussain Jillani to sit on the Bench as an ad hoc judge. He dissented against each and every decision of the court.

During the proceedings, Pakistan was unable to state that it had informed Jadhav of his rights under Article 36 (1, b). Instead, it contended that the Vienna Convention does not apply to an individual suspected of espionage, which the court interpreted as a breach of obligation. Pakistan had no explanation for the three-week delay in informing India of the arrest and denying us the opportunity to arrange for Jadhav’s legal defence. Its plea that India did not cooperate in investigating Jadhav’s alleged crimes did not cut any ice with the court, which held that consular access cannot be conditional. It held that Pakistan’s contention that Jadhav was allowed to choose a lawyer for himself, but opted for a defending officer qualified for legal representation, even if established, did not override India’s right to arrange his legal representation.

Asserting that breach of obligations must involve reparation and that “reparation must, as far as possible, wipe out all the consequences of the illegal act”, the court opined that the appropriate remedy must be effective review and reconsideration of the conviction and sentence. It noted that the Pakistani Chief of Army Staff confirmed the death sentence on Jadhav on April 10, 2017, and his appeal to the Military Appellate Court under Section 133 (B) of the Pakistan Army Act of 1952 was also rejected.

Pakistan claimed that its High Courts have reviewed jurisdiction. But the court noted that Article 199 (3) of the Constitution of Pakistan has been interpreted by the Supreme Court of Pakistan as limiting the availability of such review for a person subject to any law relating to the Armed Forces of Pakistan, including the Pakistan Army Act of 1952. Article 8 (1) of the Constitution provides that any law that is inconsistent with fundamental rights guaranteed under the Constitution is void, but this does not apply to the Pakistan Army Act due to a Constitutional amendment. Hence, it is unclear if judicial review of a military court’s decision will be available on grounds of violation of rights under Article 36 (1) of the Vienna Convention.

The ICJ said review and reconsideration of the conviction and sentence of Jadhav must be “effective”, that Pakistan could decide the means, “including, if necessary, by enacting appropriate legislation.” Pakistan, it concluded, must ensure that full weight is given to the effect of the violation of the rights enshrined in Article 36 of the Vienna Convention, as emphasised in paragraphs 139, 145 and 146 of the judgement. It directed “continued stay of execution” of Commander Jadhav till the review process is completed.

Islamabad should now, without further ado, furnish India with a copy of the charge sheet against Jadhav, transcripts of the military court proceedings, judgement, Army Chief’s confirmation of death sentence and copies of Jadhav’s mercy petition so that consular access can be fruitful. Alternately, it can simply pardon him, send him home and close this sordid chapter. On no account should he suffer “cardiac arrest.”