Chill in the Valley

Chill in the Valley 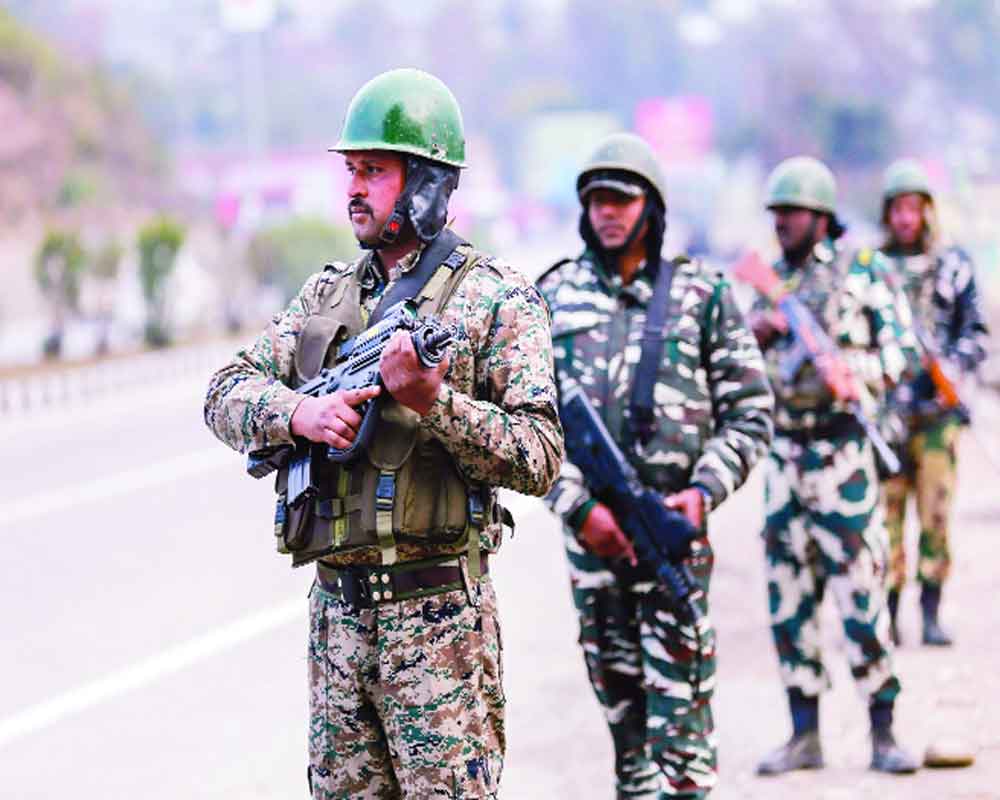 The non-initiation of dialogue is an immense disservice to our security forces. The momentum of internal talks must be matched by reviving the same with Pakistan

A deeply poignant moment of the 70th Republic Day parade was the spellbinding citation of Lance Naik Nazir Ahmad Wani for the award of the Ashok Chakra, the highest ‘peacetime gallantry award’, which is a terrible misnomer in war-ravaged Kashmir. A terrorist-turned-soldier, Wani is the first Kashmiri to bag this medal for conspicuous valour. Having won two Sena Medals earlier, he is the bravest son of the soil. An equally poignant moment was captured in the highly emotive picture of Wani’s Commanding Officer of Rashtriya Rifles battalion clutching his father, consoling him. Kashmiri soldiers and terrorists gunning for each other is not a new normal in the Valley. The stunning irony of this epic encounter is that very few, if any, Kashmiris are celebrating his martyrdom for fear of reprisals. Only a handful attended his funeral in Kulgam; whereas when another Wani, Kashmir’s poster boy, Burhan Wani, was killed in 2016 by the security forces, crowds of sympathisers, fellow terrorists and overground workers were among an unprecedented 30,000 (by one account) and 150,000 (by another estimate) mourners. Such is the striking chasm in commemorating trauma and tragedy in Kashmir.

Jammu & Kashmir Governor Satya Pal Malik was right. It is not the militants that have to be killed but militancy. Military commanders in the State have for long been agonised over this dilemma — body count but also securing the support of the people. Unfortunately, local support is diminishing, converting to public disrupting military operations to enable the terrorists escape. And when they are killed, it is the same civilians who publicly glorify their martyrdom. But no Kashmiri leader — no one — had a word of praise for soldier Wani’s bravery and sacrifice.

When terrorist Wani was being described as a cat with nine lives, he was also being paired with the academic hotshot, UPSC topper Shah Faesal — two Kashmiris on divergent paths to stardom. While Faesal has abandoned the civil service for politics, for reasons he has principally attributed to “the environment of siege in Kashmir”, he has said a lot more: Like “the roots of conflict are deeper than mere radicalisation”; “Kashmir is not a development issue” (even as the Governor was promising 40 new colleges and five medical colleges); “Hurriyat is a stakeholder and without its participation, a peace process is unrealistic”…Faesal has been more blunt in admitting he quit his Government job to protest the unabated killings in Kashmir, subversion of the Central Bureau of Investigation, Reserve Bank of India and National Investigation Agency; and marginalisation of Muslims. We will see if he becomes a topper in politics.

Another Wani, journalist Khurshid Wani, who writes for The Pioneer, declared 2018 annus horribilis. On Republic Day, he noted: “Transition of power four times, highest levels of violence in a decade, lowest economic activity and unending political uncertainty marked one of the most tumultuous years in the recent history of Jammu & Kashmir”.

For the security forces, though, there was cause to celebrate. With the elimination of three remaining terrorists, Baramulla became the first of 13 police districts in Kashmir to become militant-free. The last time a district was declared ‘militant-free’ was Kulgam in 2008 but that was short-lived. Srinagar Corps Commander, Lt Gen Anil Bhatt, who was awarded UYSM on Republic Day, hailed the Ramzan ceasefire, the holding of local elections and the extending duration of an incident-free Amarnath Yatra as outstanding achievements of 2018. Further, accounting for 257 terrorists at an attrition rate of 1:8 (soldiers:terrorist), capturing 54 terrorists and killing 26 terrorist leaders are highest military successes since 2010. Army Chief Gen Bipin Rawat is pleased with the strong counter-infiltration grid; though 140 infiltrators got through while nearly 100 were killed. Rawat asked: “Will Faesal ask misguided youth to give up the gun”? In tit-for-tat killings, the advantage was claimed by Lt Gen Ranbir Singh, Army Commander in Jammu & Kashmir and the mentor of surgical strikes. Revenge for Pakistan taking out our soldiers with sniper fire has been taken with interest, he said.

The military continues with its mission of ridding the Valley of terrorists — bringing down the threat from the present 300 terrorists to zero and declaring the Valley terrorist-free while simultaneously regaining local support to bring back normalcy. Alienation and Islamist radicalisation are galloping ahead without any effective steps to arrest their momentum and rollback. A former BSF intelligence chief, SS Guleria, has said Salafism backed by Pakistan has sounded the death knell of Kashmiriyat, which is being eroded by a fanatic Islam, and Wahabi preachers are systematically propagating the Salafi ideology among village youth on Fridays  and encouraging students to hate non-Muslims. The Hurriyat, Jamaat-e-Islami, Ahl-i-Hadith and other similar organisations have spread extremist ideologies in the Valley. Guleria has recommended the re-opening of cinemas, bars and liquor shops as well as staging concerts, playing IPL matches and restructuring the madrasa curriculum. It is time to target the instigators/abettors of violence and hatred.

The overall picture at the beginning of 2019 is bleak and chilly as the weather in the Valley. Every couple of years, say in a decade, the clock moves a full circle. Security forces do what they are best at: Putting the lid on violence and reducing the terrorist population to a manageable level. In other words, creating conditions conducive to resuming a political process with all stakeholders, including the Hurriyat. Non-initiation of dialogue is immense disservice to the security forces, who ultimately carry the can. The momentum of internal dialogue has to be backed up with reviving the talks process with Pakistan. Ideally, the two have to operate in tandem. Pakistan Army Chief, Gen Qamar Javed Bajwa has reportedly sent feelers for talks to Gen Rawat, who is ready to take a leap of faith. After the Central elections and elections in

Jammu & Kashmir,  both strands of the Kashmir dialogue can be started sometime  in mid-2019. The start of a peace process in Afghanistan shows there is no military solution.

Radha Kumar noted in her book, Paradise at War: “For the sake of Kashmiris, we must hope that a peace agreement is arrived at, sooner than later. The state of conflict in which they’ve had to live for the past 30 years with only brief interregnums of peace is intolerable…”. A young Kashmiri architect told Kumar recently: “Í just want to be left alone in my Kashmir.” Given the 70 years of India-Pakistan conflict over Kashmir, that might be too much to ask. But that should not be, Kumar concludes.