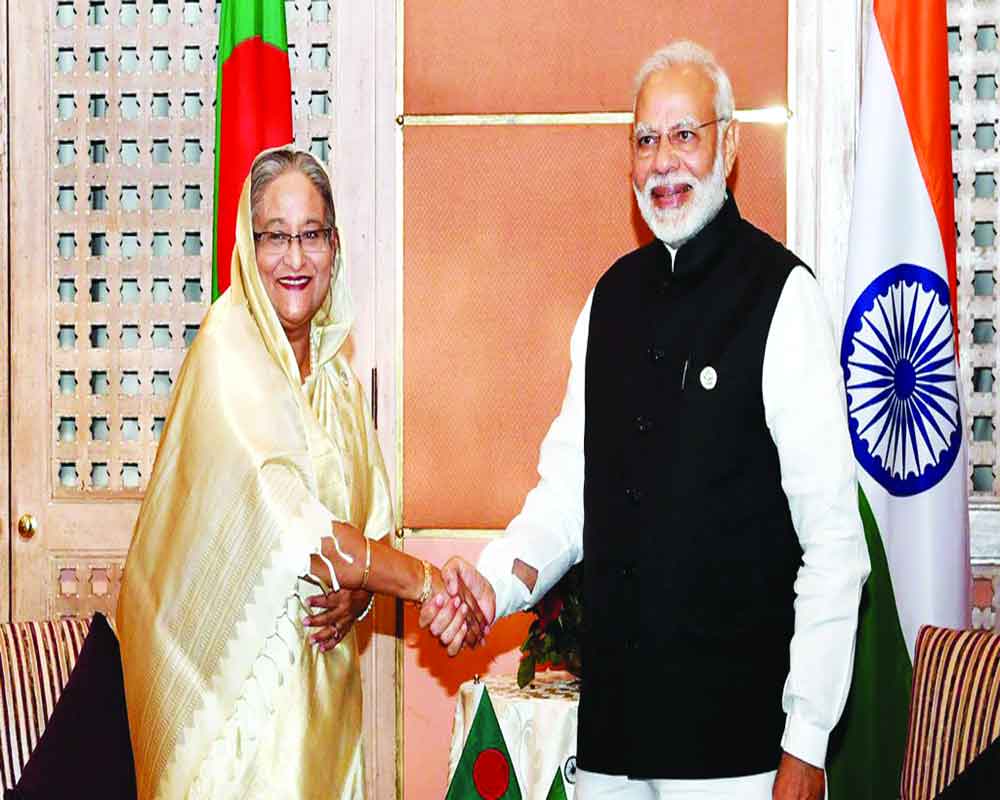 India’s migration politics — an assertion that there are 40 million Bangladeshi migrants illegally living in the country and that they must be pushed back — will morph into an explosive crisis in South Asia and destabilise the region.

This is how things will unravel: India’s looming campaign to round up suspected illegal migrants and put them in now under construction concentration camps will give Hindu nationalist zealots a license to terrorise Muslims, forcing them to flee into neighbouring countries.

In an attempt to avoid detention, many of these non-citizens, especially those in highly charged States of Assam and West Bengal, will rush towards Bangladesh because of its close proximity. India’s most friendly but highly sensitive neighbour, Bangladesh, will refuse them entry, creating tremendous border tension and a humanitarian disaster.

Enraged by the plight of the Muslims at their border, Bangladeshi Muslims will turn against their fellow Hindu countrymen. Any atrocity on Hindus in Bangladesh, in turn, will infuriate India’s Hindus, who will vent their anger on Muslims in the country.

Unless New Delhi halts its misguided politics, this sectarian tension will spiral out of control and spread all over the region and beyond, perhaps to the Middle East and Europe, where Muslim presence is significant. India will face an international public relations nightmare, which will force it to divert attention from its most pressing task at hand, fixing the country’s economy.

India will get more than it is bargaining for if it pushes the alleged illegal migrants into Bangladesh: Violent anti-India street demonstrations will rock the Muslim-majority nation of 163 million Bengalis; pro-India Prime Minister Sheikh Hasina’s Government will fall and Hindus in Bangladesh will face the fury of Muslim mobs, forcing them to flee to India.

India’s current migration politics has its roots in its northeastern State of Assam, where local politicians have periodically incited violent protests over the past 70 years to drive out non-Assamese — both Hindus and Muslims — stoking regionalism for parochial political gains.

The non-Assamese, mostly Bengali-speaking people from today’s Bangladesh and West Bengal, routinely voted for the Congress because of its secular platform. Assam and Bengal were once one administrative unit under the British and people moved freely throughout the region.

After Britain divided India — as well as Assam and Bengal — in 1947, many East Pakistan-based Hindus migrated to India and settled in Assam. This influx of migrants made indigenous Assamese angry and local politicians exploited this resentment to their advantage. A student group, that waged a six-year-long anti-Bengali violent campaign, captured power in 1985 and again in 1996.

Then came Prime Minister Narendra Modi in 2014 and Hindutva — the anti-minority politics of the Bharatiya Janata Party (BJP) — followed. Modi swept to power with a promise of jobs and growth, downplaying his roots in the powerful Hindu-nationalist group Rashtriya Swayamsevak Sangh (RSS). After a heavy defeat later on in Bihar, the BJP adopted an aggressive line, spreading the sectarian venom that India is a Hindu nation and blacklisted Muslims. Of India’s 1.3 billion people, 14 per cent are Muslim. Modi’s party does not target migrant Bangladeshi Hindus, rather promises them citizenship. But it seeks to deport Muslims, showing its anti-Islam bias. During his 2014 election campaign, Modi told migrants in States bordering Bangladesh to keep their “bags packed,” ready to be sent home. But he waited until his re-election in 2019 to bring up the issue with Dhaka.

Since Hasina returned to power in 2009, Dhaka-Delhi relations have improved remarkably to such an extent that many Bengalis think India is the strongest leg of her throne.

Indeed, Hasina has always been India’s favorite. When Bangladesh fought against Pakistan for independence in 1971, Delhi played the midwife and later stood by Hasina’s father Sheikh Mujibur Rahman, Bangladesh’s founder. After his assassination in 1975, India sheltered a young, orphan Hasina.

A grateful Hasina repaid her debt in kind by handing over an Indian separatist leader to New Delhi, signing a land boundary agreement and allowing India to ferry food and grains to its landlocked Northeast through Bangladesh. On top of all this, she turned down a Chinese offer to help build a military base in Bangladesh to keep India happy.

To reciprocate her gesture, Modi in 2015 signed 22 agreements with Bangladesh during a visit to Dhaka and extended a $2 billion credit line and pledged $5 billion worth of investments. When Hasina visited Delhi in 2017, she signed two defence pacts, the first such deals between India and any of its neighbours, enabling the two countries to conduct joint military exercises and training. In her just-concluded second visit, Hasina went back with seven pacts in her kitty

But all these goodwill gestures may soon start unraveling, thanks to an explosive claim by Modi’s hardline Government that the 40 million Bangladeshi illegal migrants must be sent back home.

Modi’s party campaigned on this issue during the 2019 general election and won a landslide victory. Bangladesh initially dismissed the campaign rhetoric as domestic politics. But in August India’s hardline Home Minister Amit Shah, who is likely to succeed Modi, raised the matter with his Bangladeshi counterpart during talks in New Delhi.

Bangladesh’s Home Minister Asaduzzaman Khan flatly dismissed India’s claim. He told Shah that Bangladeshis do not stay illegally in India, because its economy is at par with India’s, if not better. (Bangladesh will post 8 per cent growth in 2019, against India’s 5 per cent.) The matter became so acrimonious that the two sides failed to issue a joint statement after the talks ended. Upon his return home, Khan fumed over it. India, however, seems determined to push its agenda. It has launched a campaign to round up Muslims unless they can prove they have lived in India since before 1971 when Bangladesh was born. They will be put in concentration camps, which ironically the migrants themselves are building now. India has classified nearly two million of its long-term residents as non-citizens, making them stateless.

Dhaka is nervous because India may seek to push at least the alleged Muslim migrants into Bangladesh, the world’s most densely-populated country with an area of 56,000 square miles, less than 5 per cent of India’s size.

What makes Bangladeshis jittery is the fear that its neighbour might export convicted criminals, dubbing them as illegal migrants, as Cuba sent mental patients and miscreants to the United States in 1980.

Any such move by India would have a far-reaching consequence for its relations with Bangladesh. It will not only undermine Hasina’s Government but also give fodder to Islamic extremists whom she has largely kept under control. Another worrisome prospect is there may be a repeat of the bloodbath that followed India’s Partition in 1947. Any forced dumping of Muslims from India will be catastrophic for Bangladesh’s 20 million Hindus. Infuriated by India’s action, Bangladeshi Muslims will vent their anger on their fellow Hindu countrymen, forcing them to flee to India, the way they did in 1971 after Pakistan committed genocide in East Pakistan.

Such an exodus, in turn, will enrage the already psyched-up saffron soldiers of Modi’s party, who will be more than pleased to turn Hindustan into an anti-Muslim battleground, just to avenge historical humiliation of the Hindus under Muslim rulers for a thousand years, if nothing else.

If terrorised badly enough, India’s nearly 200 million Muslim citizens may start flocking to Pakistan, an outcome that orthodox Hindus wish for; alternatively, they may fight back the hyper-nationalist Hindus, as the British minorities did against the “skinheads” in the1980s. This vicious cycle of communal hostility will push the region into chaos and misery, dimming its economic prospects for decades.

(The writer is an established author on Bangladesh)