Dealing with a new Lanka

Dealing with a new Lanka 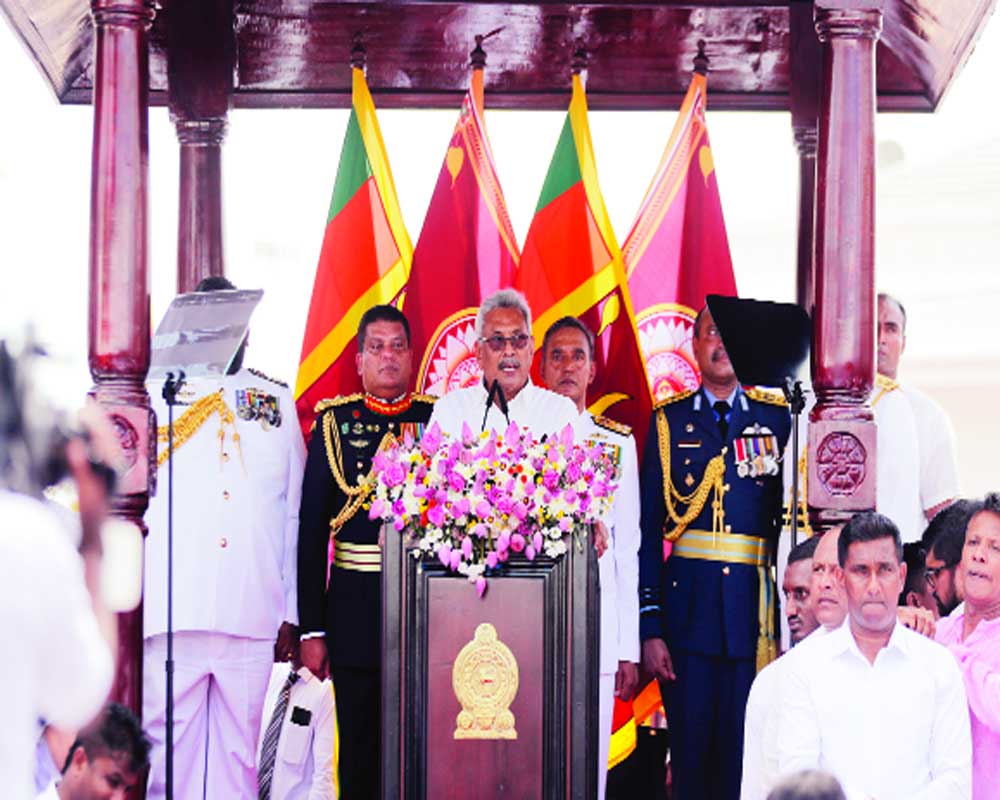 In a multi-polar world that’s grunting through protectionism and a slow economy and where every nation is trying to steer its course, each has been unanimously electing a muscular leadership to helm its destiny. In that sense, the victory of Gotabaya Rajapaksa, the nationalist strongman of the Sri Lankan People’s Party (SLPP) and the brother of former President Mahinda Rajapaksa, in the island nation’s elections does not come as a surprise. Particularly in the aftermath of the Easter bombings, which showed how scattered IS modules were choosing virgin targets, the Sinhalese Buddhist majority consolidation has been complete. And from the citizens’ perspective, they elected a militarist who was responsible for the clean-up of the Tamil movement and its fighters earlier and whom they believe can tackle terrorism as well as execute what’s best for them. At the same time in a revisionist throwback, they have entrusted their collective fate to the Rajapaksa clan. For with Gotabaya as President, he is sure to bring in brother Mahinda as Prime Minister (he has been President before but can still be PM) and as is their wont, the power structures are expected to be concentrated in a family that has been punishing to Tamils, worrying for India and benevolent to Chinese strategic interests and investment. Going by India’s troubled relationship with Mahinda and the Tamil wipeout, there are stressors no doubt and apprehensions about Gotabaya. Apart from taking down Tamils, Mahinda  sought to reduce dependence on India by aggressively pursuing the Chinese, accusing New Delhi of intervening in the internal affairs of Sri Lanka by propping up his own protege Maithripala Sirisena against him and ensuring he lost the elections. Sirisena’s SLFP and ally UNP, whose leader Ranil Wickremesinghe became Prime Minister, formed a coalition Government which was pro-India. The Indian establishment was also too overt rather than being covert about its interventions. So a hurt Mahinda never settled down, his party scoring in local elections till he forced a coup last October, subduing Sirisena, getting him to sack Wickremesinghe and becoming Prime Minister for 51 days. Gotabaya took charge of Defence and Security, kept the Tamil-majority areas under strict military vigil and put Indian diplomats under surveillance. It is this distrust that needs to be healed now for geo-strategic reasons if we don’t want China to run far ahead.

Of course, India’s latest diplomacy in the neighbourhood has factored in the pragmatism by smaller neighbours, who have successfully played on its anxieties with China and are negotiating the best of both worlds given the competitive muscle-flexing by two Asian majors. Bangladesh, Nepal and Sri Lanka are all happily walking the trajectory of “trade ties” with China and “historical linkage” with India to buttonhole both nations into giving concessions. Gotabaya, too, has seized the PR advantage by calling India “our relative” soon after his win and holding his oath ceremony at Anuradhapura, the city born out of our historical linkages. The Modi Government has changed tack over the last year and is pushing proactive participation over historical assumptions in its Lanka policy. The Chinese are way ahead here and we cannot be immune to their growing footprints. They have a 99-year lease on the Hambantota port after Sri Lanka’s failure to repay loans and are using it to enhance their military arc in the Indian Ocean region all the way to east Africa. The Chinese have even created an island off Colombo, a new financial hotspot and a key conduit to east Africa, besides securing hold of the island nation’s infrastructure sector, hospitality and supply chains. And while we may be debating about the adoption of Huawei’s 5G technology in the country, Sri Lanka has made it abundantly clear that it has no security fears about the new-generation mobile telephony technology. India has, therefore, got to do a very tightrope act with Lanka if it wants to protect its strategic interests amid a Chinese swamp. That, too, without compromising too much on Tamil and minority interests. Economics is a good starting point. We need to work on investment and project partnerships, encourage soft diplomacy via people-to-people contacts and strengthen an institution like BIMSTEC to ensure a more multi-layered communication. Thankfully, Gotabaya has good personal equations in the power corridors of Delhi and will be amenable to negotiations. But for a win-win, India has to be a respected stakeholder, not appear like an exploitative neighbour.