Death of Baghdadi is not end of ISIS

Death of Baghdadi is not end of ISIS 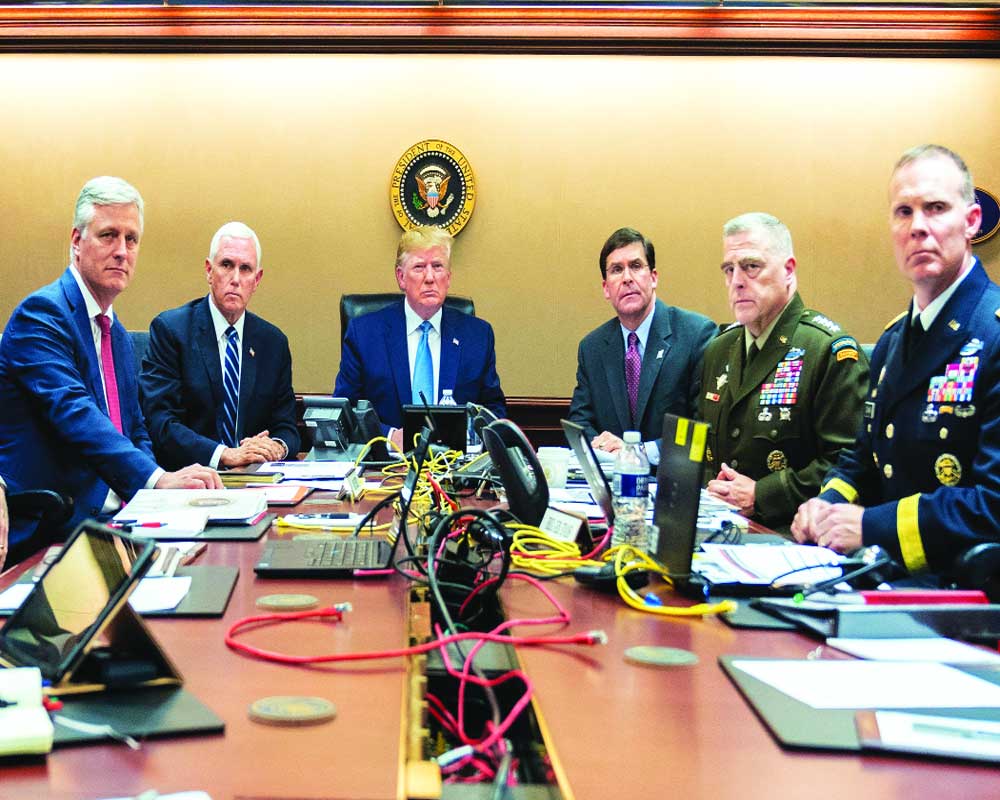 Though the elite US Delta Force commandos have put an end to the ISIS leader, the remnants of the ISIS, spread from Africa to Australasia, will not simply fade away. Worst is yet to come

The death of Abu Bakr al-Baghdadi, the chief of the Islamic State (ISIS), has brought a sigh of relief to the international community. The monster who has been on a terror campaign with his army of zealots finally had to bow down in front of the superior US forces.

On October 26, Baghdadi blew himself up after being cornered in a blind alley by American elite commandos at Barisha, in the district of Harem, Idlib, a northwestern province of Syria. As per the information released by the US President’s office, Baghdadi detonated an explosive vest, killing himself and two of his children when he faced a certain death at the hands of the US forces. The high-risk operation was successful because of the close cooperation from Turkey, Syria, Russia, Iraq and the Syrian Kurds.

Let us track the long and arduous journey of Baghdadi in forming the ISIS empire and its decline. Under Baghdadi’s stewardship, the ISIS evolved from a ragtag group of insurgents to an organised Islamic militia. He was referred to as “Caliph Ibrahim” by his followers in the Muslim world.

Baghdadi claimed himself to be a descendant of the Quraysh tribe of Islamic Prophet Muhammed. And eventually, under Baghdadi’s leadership, the ISIS established a regime of its own, spreading across the West Asian & North African region, and for the first time, it occupied territories to impose its bizarre caliphate. The militants initially consisted of ultra-conservative jihadists, largely drawn from Baathists, the members of late Iraqi President Saddam Hussein’s military and intelligence apparatus. But later, the group included many youths who had a traditional hatred towards the West for its alleged atrocities against Muslims across the world.

Under the US forces’ nose, the disgruntled Baathists quietly provided the ISIS a large cache of weapons, explosive materials, solid intelligence and meticulous planning to take revenge on the occupying Western forces. Further, the hardcore jihadists, who joined the militant ranks for advancing the cause of Islamic caliphate across the world, brought along with them fanaticism and the deadly weapon of supreme sacrifice, i.e. an army of fidayeen.

In fact, this group emerged from the remnants of al-Qaeda in Iraq (AQI), a local offshoot of al-Qaeda founded by Abu Musab al Zarqawi in 2004. But the AQI faded into obscurity for many years after the US invasion of Iraq. It started re-emerging from 2011. And since then, over the next few years, it took full advantage of the growing instability in Iraq and Syria, it has got a golden opportunity to bolster its rank and file through deadly attacks and massive recruitment of cadre from around the world. This all have happened against the backdrop of the Arab Spring and fallout of the US attacks on Iraq.

The jihadist group changed its name to the Islamic State of Iraq and Syria (ISIS) in 2013. Afterwards, it launched an offensive on Mosul and Tikrit in June 2014. And in June 29, ISIS leader Baghdadi announced the formation of the Caliphate, stretching from Aleppo in Syria to Diyala in Iraq. Henceforth, the self-styled Caliphate, renamed the group as the Islamic State (ISIS).

In August 7, 2014, a US-led operation, named “Operation Inherent Resolve” was launched against the Islamists. By the very next month, the offensive was expanded to Syria. But then in 2015, the US conducted nearly 8,000 air strikes both in Iraq and Syria, targeting the insurgents, who were wreaking havoc on various parts of the world.

Surprisingly, in the same year, amid US-led combing operations, the jihadists were able to expand their network of affiliates to almost eight countries, beyond Iraq and Syria. But by December, the Caliphate had lost almost 95 per cent of its territory, including its two most prized territories — Mosul, Iraq’s second biggest city, and Raqqa, so-called ISIS capital, in Northern Syria.

By 2018, the anti-ISIS operation was shifted to eastern part of Syria. During this operation, the US-backed coalition of Syrian Kurds and Arabs, called the Syrian Democratic Forces (SDF), were able to wrest some of the key positions from the ISIS.

Interestingly, though the ISIS was still hale and hearty, on December 19, 2018, President Trump declared that it was decimated. With this, he also indicated his intention to withdraw all the 2,000 US troops, supporting the SDF, from Syria. However, the SDF kept fighting the ISIS and wrested its last territory in Baghouz on March 23, 2019. This finally brought down the massive terror regime propelled by Baghdadi’s Caliphate.

The death of Baghdadi is being celebrated across the world. Saudi Crown Prince Mohammed bin Salman, while congratulating President Trump for the feat, said the operation led by the US Special Forces was a historic one in fight against extremism. Saudi Arabia said Baghdadi had distorted the image of Islam. Egypt appreciated the American action, urging for “unified action and a comprehensive perspective that takes into account the security, development and ideological dimensions” in the fight against armed groups.

Turkish President Erdogan said Baghdadi’s killing “marked a turning point in our joint fight against terrorism”. Afghanistan, while welcoming the US action, stated that “the death of Baghdadi is the biggest blow to this group and to terrorism”. However,  the Russian Defence Ministry reacted with skepticism, saying it had no reliable information on the US operation.

The ISIS on October 31 confirmed the death of its founder and leader Baghdadi and announced a successor, named Abu Ibrahim al-Hashimi al-Quraishi, who is  largely unknown outside of ISIS circles. However, the ISIS praised Quraishi as “emir of the believers” and “caliph” of ISIS’ caliphate.

To step into Baghdadi’s shoes successfully, Quraishi will have to have unquestionable loyalty to the ISIS, proven capability to plan strategically and impeccable religious credentials. Despite these prerequisites, Quraishi seems to lack experience in the war-field and doesn’t have a reputation of carrying out deadly attacks on ISIS’ enemies.

Though Baghdadi was widely referred to as a caliph, many in the international media have reported about his dark background quite often.

Once BBC reported, “Baghdadi was a serial rapist, forcing himself on, among others, the captured American aid worker Kayla Mueller and presiding over the mass enslavement of Yazidi women and underage girls.”

However, the negative report didn’t diminish his loyalty among his ardent followers. 2016 was a turning point for Baghdadi. He had finally taken a call for splitting away from the al-Qaeda. The groups disagreed on many issues, the central point on which they have major differences is the use of extreme and sadistic way of violence on the enemies.

All told, one question that might be intriguing for many is that why Baghdadi was taking shelter in the Idlib province which is a known to be the stronghold of his rival. Though it has come out that he was paying a security fee to his rivals for his stay in their territory, it can’t be said with certainty why did his chose the rival area as his safe haven.

Probably, he was trying for rapprochement between the two jihadist organisations to carry out more lethal attacks or to strengthen the ISIS as it was fast losing its grip both in Syria and in Iraq.

With his death, lone wolf attacks, suicide bombings and all other forms of jihadist aggression might witness a spike both in frustration and in a show of strength and to raise the sagging morale of the cadre and sympathisers of the ISIS around the world.

His death may temporarily disrupt the activities of the group, but the jihadists are likely to regroup sooner as predicted by terror experts.

They may attempt revenge against the US and its army installations across the West Asian region and all possible allies of America.

Though the elite US Delta Force commandos have put an end to the ISIS leader for now, the remnants of the ISIS, spread from Africa to Australasia, will not simply fade away. Worst is yet to come.