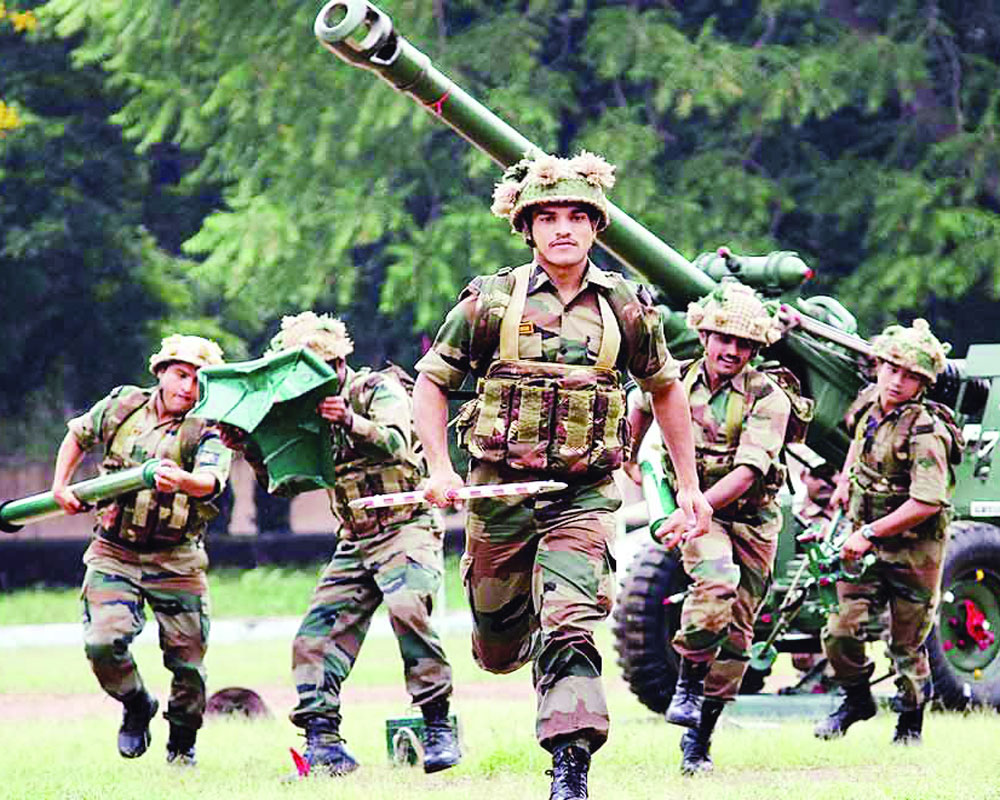 When former Defence Minister Nirmala Sitharaman — one of four in the Modi 1.0 government — presented her maiden finance budget, hope and expectation about the defence allocation had rocketed, especially after she flagged national security and economic goals as her government’s priorities. The reality was different. The grandstanding of national security — rich on symbolism and rhetoric, hollow in providing resources for the jawans to fight another Kargil whose 20th anniversary is being commemorated with high drama — is delusion. Nothing has changed, no lessons learnt especially  after Army Chief  Gen Ved Malik said, “We will fight with what we have” when surprised by Pakistani incursions. Unfortunately Air Chief Marshal B S Dhanoa expressed precisely  similar resolve after Balakot when confronted with a question about a two-front war by a journalist. In the catastrophic 1962 war, Lt  Col M S Rikh, Commanding Officer 2 Rajput at Namka Chu, said the same: “We will fight with what we have”. The infection has  spread among the higher  military leadership, which has made a fetish of fighting under-resourced  even as governments have milked the armed forces for electoral gains. The Modi government thinks that its three quarters-baked One Rank One Pay (OROP) is a substitute for modernisation. Sitharaman’s defence allocation got the thumbs down when it made a token increase of six per cent over the last budget with hardly any change from the interim budget in February. “Soldiers got a raw deal from Sitharaman,” said veterans.

In her several media interviews, the solitary question on defence allocation was standard: “You were defence minister; why no increase in defence budget”. Her reply was also standard: “There is an increase customs duty on defence imports have been exempted...MoD is ok with the allocation.” At the India Today TV’s budget conclave with India Inc, she was asked  how difficult it was for her in the MoD. Smilingly she answered: “The Generals are easy to deal with” — a backhanded compliment with a message: “You will continue to fight with what you have”. Militaries fight with essentials.

When the suave and articulate Arun Jaitley was  Defence Minister, his views on the Defence Budget were  revealing. In his second budget presentation, when asked on Doordarshan why there was only a nominal hike in defence, he replied: “I can give them more. But they can’t spend the money”. In the next budget, to the same question by the same person on the same channel, he said: “I don’t have the money”. Incidentally, Jaitley, not Sitharaman was the first Finance Minister to skip mentioning defence allocation in the budget speech. Just before the last election he told an Aaj Tak national security conclave that defence budget would increase once the tax net expanded and GDP grew. This esoteric methodology of defence allocation was confirmed  by  Defence Secretary Ajay Prasad on Doordarshan. When asked about inadequacy of funds for modernisation, he replied: “Towards December, I usually expect a call from the Finance Secretary  asking  MoD to return Rs  eight-10,000 crore.”

The plea to increase the defence budget this year was made in Parliament by Congress members — soldier-politician Amarinder Singh, Manish Tewari, Shashi Tharoor and Preneet Kaur. Tewari quoted from a parliamentary panel report that defence expenditure had fallen in 2017-18 to 1.6 per  cent of GDP and in 2019-20, the interim budget had declined further to 1.52 per cent GDP, the lowest since 1962.  Defence Capital account  has also  reduced from 45.3 per cent in 2009-10 to 31 per cent in 2019-20. Returning to Sitharaman’s budget, she said as defence had immediate requirement of modernisation and upgradation which is a national priority, “I am exempting defence imports from customs duty (started in 2016).” Besides, the revenue head of salary accounts and defence pension is not included in the defence budget, the crux of funding as the minister cited, is in modernisation of the armed forces. When the interim budget allotted a meagre increase in capital account, defence Minister Sitharaman promised to take up the issue with the Finance Ministry.

The MoD has a way about explaining deficiencies in funding. It says it is bound by budgetary ceilings laid down by Finance Ministry, adding that the reduced allocations were passed on uniformly to all the three services. Here’s the rub. Who is prioritising capital allocations in the absence of the CDS? Is it the Defence Secretary? Or the new czar of the Defence Planning Committee, NSA A K Doval? This brings us back to the basics: the lacunae in the defence planning process.

Unless the Defence Minister has issued her operational directive to the armed forces this month (one has not been given to them for more than a decade; in any case, the services/Integrated Defence Staff scripts it), the single services work independently  along their own strategic perspective to evolve roles and missions without any prior strategic and technological environment assessment - the Strategic Defence and Security Review. Is India going to fight a two or two and a half front war? Only former Army Chief, Gen Deepak Kapoor knows as he evolved this scenario in 2009. The force levels to match the threats and challenges will emerge from the SDSR, not Kapoor’s strategic thinking .

Prime Minister Modi has waxed eloquent on Uri, Balakot and the soldier, but never said a word on his defence  budgets. Next week, Kargil will be showcased with great symbolism. Sitharaman’s pithy remark that Generals are easy to deal with, will haunt Service Chiefs who will fight with what they have.