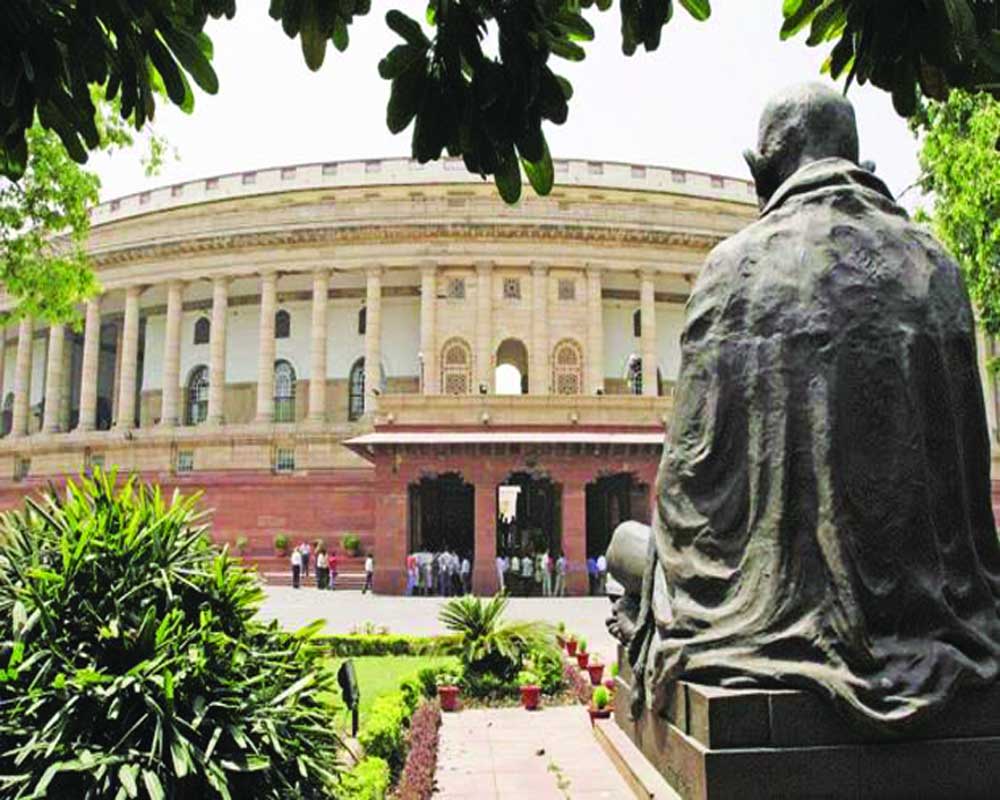 Post-Assembly election developments in Haryana and Maharashtra can create distress and erode people’s trust and confidence in the electoral process. Leaders must review their acts

Progress and development are the key pursuits of an aspirational generation in a globalised world. India, too, is on the move, striving to accelerate transition from the status of being a developing to a developed nation. In this march ahead, there is little time to seriously monitor regular onslaughts on the democratic principles and norms, imbued with moral and ethical values as enshrined in the Constitution. Is “politics without principles” no more a sin — as Mahatma Gandhi had termed it in 1925 — but more of a routine practice?

On November 8, 2019, a couple of well-informed individuals — achievers — expressed disappointment on the machinations indulged in Maharashtra after the Assembly elections. This was not for the first time. Even before, there was a severe sense of disappointment in this group, where none is bound by political or ideological constraint. But they appeared seriously involved, concerned and worried. Yes, they all love India; they value its democracy, ethical, moral and spiritual heritage for which the country is eulogised globally even today. They were just not able to comprehend how a political party with just 56 seats out of a 288-member Assembly could stake claim to the top post with unimaginable arrogance. One more blazing instance of the decline of democratic values came with Haryana’s culture of “Aaya Ram Gaya Ram”, which became a practice and has resulted in several anomalous situations.

We have had Prime Ministers and Chief Ministers, who should have never been there. In the current context, while lengthy reports on the herding of MLAs to hotels as hostages were highlighted in both electronic and print media, hardly was there any mention of the trampling of democratic values, neglect of the wishes of the people, who elect their leaders and expect some swift action from them on a plethora of pending issues that impact daily life. Do the elected representatives in Maharashtra, irrespective of their party affiliation, owe no debt of gratitude to the freedom fighters of India, their sacrifices, their indomitable spirit, which alone is responsible for their newly-acquired perks and privileges and the exalted positions? Did the people elect them to indulge in such unsavoury public conduct for power, position and creamy Ministries?

It is indeed shocking that not even one MLA could protest against his/her herding into the hotels, which was apparently done “to save them from poachers of the other side.” Are our leaders so weak and vulnerable? Maharashtra is only a repeat of what has been happening in several States in the past few decades. Why should herding not attract the attention of Parliament? Should some provision like making it mandatory to install a new Government — in full strength — within seven days of the declaration results not be put in the statutes? There was no justification — moral, ethical or Constitutional — for the non-formation of a full strength Government in Haryana even after three weeks. All that happens in the intervening period is that the credibility of democracy and of the elected representatives is lowered. It is shameful to term certain Ministries as “creamy.” People interpret it in their own way and they are rarely incorrect.

On October 2 this year, India celebrated the 150th birth anniversary of Mahatma Gandhi. It was a time to recall his life, values and that immortal one-line statement: “My life is my message.” If political leaders of today — baring exceptions — reflect on this one-liner, they will realise what they have done to Swaraj of Gandhi: “Real Swaraj will come not by acquisition of authority by a few but by acquisition of the capacity by all to resist authority when it is abused. In other words, Swaraj is to be obtained by educating the masses to a sense of their capacity to regulate and control authority.”

On March 19, 1931, Gandhi wrote in Young India: “The word ‘Swaraj’ is sacred, it is a Vedic word, meaning self-rule and self-restraint and not freedom from all restraint, which independence often means.” Gandhiji wanted Swaraj “to keep intact the genius of our civilisation.” This hardly needs any elaboration: Think of the last man in the line, his welfare and your role and responsibility to better his life. The Mahatma’s writings are universally acclaimed for their simplicity, sensitivity, originating from the heart and are based on hard experiences and realities of life.  To comprehend and to put them into practice, one requires inner strength, perseverance and empathy for others. Swaraj  — Independence — is a dynamic living entity and it has to be maintained and sustained with persistent individual and national effort. It can be sustained only if certain basic values and principles of democracy are adhered to by the people and more seriously by their democratically-elected representatives.

Gandhiji tells us how this could be achieved: “Swaraj can be maintained only where there is majority of loyal and patriotic people to whom the good of the nation is paramount above all other considerations, including their personal profit. Swaraj means Government by the many. Where the many are immoral or selfish, their Government can spell anarchy and nothing else.”

Expectations of Gandhi — and all other stalwarts of the freedom struggle — and the people were that, “If Swaraj was not meant to civilise us and to purify and stabilise our civilisation, it would be nothing worth. The very essence of our civilisation is that we give paramount place to morality in all our affairs — public or private.” It was a warning articulated with unimpeachable logic even before Swaraj was anywhere on the horizon.

In fact, in 1922, Gandhiji had mentioned in a letter that Swaraj would not bring happiness to our people as four things would weigh heavily on them.  Defects of elections was prominent among these four. The other three were injustice, burden of administration and treachery of the rich. Was he not prophetic indeed?

Post-Assembly election developments in Haryana and Maharashtra must be viewed as a serious warning sign, which create distress and erode people’s trust and confidence in the electoral process that is so critical to sustain democracy in its true spirit. A brighter side could open even in a clumsy political arena if everyone in the position of power realises how the world values our contributions and achievements in creative and fields — right from the ancient times to the launch of Chandrayaan.

Let Our MPs and MLAs realise their responsibility in the light of India’s achievements in space sciences, ICT and also that of young Indians, who have brought us fame and global attention through their presence in the Silicon Valley, NASA, particularly in top slots in big corporate and global institutions. This thread of India’s greatness becomes visible in practically every serious analysis of the current situation. It is indeed necessary for inspiration and motivation to move ahead with renewed vigour on the path of progress and inclusive growth.

One evening, an interaction closed at a point when someone mentioned that the Ayodhya judgment would be delivered tomorrow, that all necessary steps are being taken to beef up security, maintain law and order and ensure that no breach of law and order takes place. And what a great 9/11 this was in India in the year 2019. It must have caused acute anxiety and anguish to the perpetual detractors of the country, who were expecting a country-wide unrest, whatever the judgment be.

But on this day, the world saw a glimpse of a united India, one which was proud of its ancient culture of acceptance of all, every conceivable diversity and that India has learnt to “live together” over a couple of millennia, a skill that some of the Western nations have no escape but need to learn now. Our political representatives should not present a disheartening scenario before the people. Once elected, they owe a debt to the country,  its people and Gandhiji. It was a proud achievement for the country, its democracy and the Constitution.

People have very high hopes from the elected, young representatives, who must chalk out their own path. They can learn so much from the likes of our great leaders like Swami Vivekananda, Sri Aurobindo, Rabindranath Tagore, Mahatma Gandhi and other luminaries, who continued to grow in life and were at peace with themselves. JRD Tata had once said, “Always aim at perfection for only then will you achieve excellence.” Gandhiji did just that all along the journey of his life. This can be the aim of life for anyone.  Look around but never be slack in looking within.

To comprehend it, one must recall the words of John Dewey: “Not perfection as a final goal, but the ever-enduring process of perfecting, maturing, refining, is the aim in living. The bad man is the man who, no matter how good he has been, is beginning to deteriorate, to grow less good. The good man is the man who, no matter how morally unworthy he has been, is moving to become better. Such a conception makes one severe in judging himself and humane in judging others.” This can enlighten the path of those in public life.