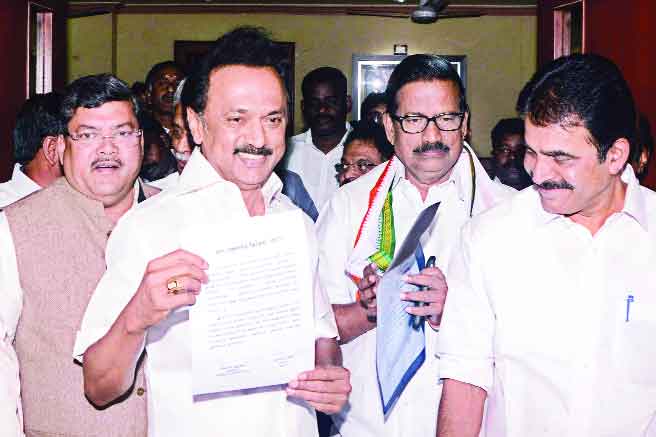 With the Congress and the BJP stitching alliances with DMK and AIADMK respectively, some interesting action awaits Tamil Nadu with both regional parties having to battle contradictions

Well, Tamil Nadu is ready for the quinquennial Lok Sabha election which may take place in the month of April. With the Dravida Munnetra Kazhagam (DMK) and the Congress announcing the formalisation of their alliance to fight the Lok Sabha election  together, the line-up in the State is ready. The mahagathbandhan in the Dravidian land would be led by MK Stalin with the Congress, the Left, the Marumalarchi Dravida Munnetra Kazhagam (MDMK), the Viduthalai Chiruthaigal Katchi (VCK) and the Islamist parties riding piggyback on the shoulders of the DMK. Meanwhile, the ruling All India Anna Dravida Munnetra Kazhagam (AIADMK) has announced the mega alliance that features the Vanniyar-dominated Pattali Makkal Katchi (PMK) and the Bharatiya Janata Party (BJP). The AIADMK is in talks with the Desiya Murpokku Dravida Kazhagam (DMDK), led by former film star Vijayakanth and the Tamil Maanila Congress of GK Vasan, son of former Congress strongman, GK Moopnar.

Since all constituents in the DMK-led front are themselves struggling to stay afloat, they would be happy with whatever the DMK throws at them. The VCK, a fringe outfit led by Thol Thirumavalavan, has been out in the political wilderness since 2009. It has no representation in the Tamil Nadu Assembly since 2011 and its leaders have been losing successively since 2009. The communists are also facing uncertainty in the State after they failed to win at least a single seat either in the Lok Sabha or in the Assembly since 2014. But they claim that they are the ones who determine the future of Tamil Nadu.

Till the AIADMK succeeded in making deals with the PMK and the BJP, by allocating seven and five seats to them respectively, it was widely believed that the DMK was in for a big win in the Lok Sabha election. The AIADMK has been fretting and floundering since the passing away of party supremo, J Jayalalithaa, in December 2016. The group led by Sasikala (former aide of Jayalalithaa), popularly known as the ‘Mannargudi Mafia’, had walked away with one faction of the party while the official faction led by Chief Minister Edappadi K Palaniswami looked vulnerable, fragile and weak. While Sasikala had to surrender to the Parappana Agrahara Central Prison in Bengaluru in February 2017, following a Supreme Court order which quashed the Karnataka High Court’s verdict that had acquitted Jayalalithaa, Ilavarasi and VN Sudhakaran in the disproportionate asset case, TTV Dinakaran, Sasikala’s nephew, emerged as the de facto leader of the AIADMK, much to the anguish of the cadre.

But within months, the Mannargudi clan was eased out of the AIADMK and Chief Minister Palaniswami slowly but steadily started taking control of the party and the Government. Though he is yet to emerge as a charismatic leader who could match the prowess of Amma (as Jayalalithaa is addressed by the cadre), Palaniswami has proved that he is not a pushover. As he completed two years in office on February 17, the small-time politician from the Edappadi village in Salem has tightened his grip over the party and Government apparatus.

Since day one of his swearing in as the Chief Minister, Palaniswami was under attack by Stalin, the Leader of the Opposition. The Income Tax and Central Bureau of Investigation (CBI) raids on the offices and residences of Health Minister C Vijaya Baskar and his department heads, the gutkha scam, which led to CBI raids in the houses of top police officers in the State and the vigilance probe into the civil contracts given by the AIADMK Government to a cartel of contractors, successively added to the worries of the Chief Minister. Stalin had been claiming that the Government would not last for more than a month.

The DMK chief’s agony can be understood. The party has been out of the corridors of power in Chennai since 2011 and out of the Delhi power circle since 2013. It is a struggle for survival for him and his party. The 2014 Lok Sabha election saw a political tsunami with Jayalalithaa devastating the DMK in all 39 constituencies in Tamil Nadu. Interestingly, the Congress and the DMK fought the election separately with the latter forfeiting its security deposits in all constituencies except Kanyakumari, where the party finished second to the BJP. The DMK is facing a series of disadvantages from within as well as outside. The major issue hanging like a sword of Damocles over Stalin’s head is his own elder brother, MK Alagiri. Though Alagiri has been expelled from the DMK following the machinations of Stalin, the Madurai-based son of late M Karunanidhi is a force to reckon with in many pockets of Tamil Nadu. The media in the State has never been a fan of the blunt-talking Alagiri. If one has to know the influence wielded by Alagiri, all one has to do is to check the results of the 2001 Assembly election, which the DMK was widely believed to have won easily. Alagiri is a veteran expert in tilting the scales of electoral battles. Dayanidhi Maran and Kalanithi Maran, the grand nephews of late Karunanidhi, are running from court to court to derail the trial in the illegal telephone  exchange case in which the brothers are the prime accused.

Then there are inherent problems. The DMK itself is a secessionist party as Stalin had declared in March 2018 that the idea of a separate Dravida nation was still alive in the constitution of the party. The presence of the Congress in the DMK camp itself is a contradiction because the latter is for the immediate release of all the seven assassins undergoing life imprisonment in the 1991 assassination of former Prime Minister Rajiv Gandhi. The other constituents in the DMK front have made it known that they would fight for the release of the seven assassins, leaving the Congress flabbergasted.

The AIADMK front, too, has contradictions and weaknesses. The PMK is in the forefront, fighting for exempting Tamil Nadu from NEET. M Thambi Durai of the AIADMK, who is the deputy speaker of the Lok Sabha, was against any kind of alliance with the BJP, which he describes as a communal party. Anwhar Raajhaa, the Muslim face of the AIADMK, has declared that he would fight against the triple talaq Bill till his last breath. It may sound interesting but the truth remains that Anbumani Ramadoss, the chief ministerial candidate of the PMK, had submitted a massive memorandum to Governor Banwarilal Purohit, listing nearly 30 corruption charges against the AIADMK Government. But the PMK and the AIADMK are strong alliance partners now.

Then there are issues like education. Tamil Nadu is the only State in the country which does not have a single Navodaya Vidyalaya, a public school concept introduced by the Rajiv Gandhi Government in 1986. Reason? Dravidian parties are against teaching of Hindi and Sanskrit in schools. What has happened is that students in Tamil Nadu have fallen behind in the standard of education because the State-level school syllabus is poor, compared to the quality of education in other standards. The children of Tamil chauvinist politicians learn Hindi and English in high-end schools. The non-teaching of Hindi in the State has created a sense of alienation in the minds of the people.

The split in the party and the absence of a powerful leader like Jayalalithaa has made the AIADMK vulnerable. TTV Dinakaran hopes that the Thevar community would vote for him, which would further weaken the AIADMK. But Palaniswami, who hails from the Vellala Gounder  community, is confident that his brethren in south and south-west Tamil Nadu would stand with him because he is the first Chief Minister from this community. The inclusion of PMK was also not without reason. The Vanniyars are an influential lot in the districts — ranging from Tiruvallur to Kanchipuram, Velloor to Tiruvannamalai and from Viluppuram to Cuddalore. Though the PMK and the DMDK failed to win at least a single seat in the 2016 Assembly election, results show that they retained their vote percentage in the State, which fluctuates between five per cent to six per cent. The caste factor plays an important role in Tamil Nadu despite claims made by the Dravidians that theirs is a casteless society. The AIADMK was staging a ‘coup’ when it signed the deal with the PMK.

The DMK front looks formidable on paper, like the Brazilian team for the 2018 World Cup Football Championship. Stalin reminds one of Neymar, a paper tiger. The DMK president is a pale shadow of his late father Karunanidhi. Add to this the Periarites and Dravidian intelligentsia of Chennai, which has spread the ‘news’ that the DMK front would win all the 39 seats from the State. They also spread the news that the BJP high command was threatening the AIADMK for 20 seats. The allocation of five seats by the AIADMK, which was accepted by the BJP, demolishes a part of the falsehood spread by media and intelligentsia.

It is true that the AIADMK has failed in countering the propaganda by Dravidians. But by Tuesday, when the AIADMK-BJP-PMK alliance was announced, it had become clear that the DMK would not have a smooth sailing in the bout. The AIADMK looked like a party which would be outplayed by the DMK with a tennis score (40-0). But not any more. There is some interesting action in store as the AIADMK, the DMK and Dinakaran take to the field. To add to the glamour, there is Kamal Haasan, who thinks he is the greatest of all politicians. Let the game begin!

(The writer is Special Correspondent, The Pioneer)