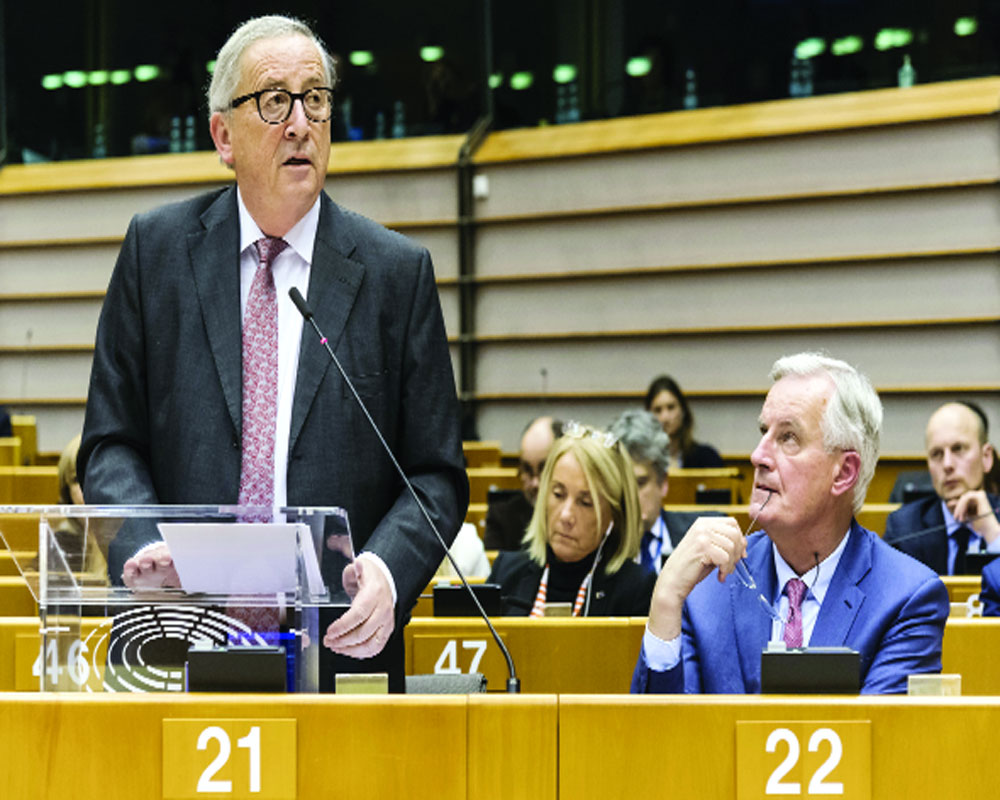 The EU leadership is wading through serious political and economic crises. But then the member nations should not leave the onus of searching for an avant-garde solution only on Brussels

The Euro, the single common currency of the 19 members of the 28-member European Union (EU), completed two decades this January. The survival of the currency is itself a big feat. The Euro has uniquely yoked together and made a mosaic of nations of such varied cultures, languages and nationalities that is simply unimaginable. The Euro came of age and sometime back ranked as the world’s number two currency. What the international community has witnessed is that after years of relentless criticism and prediction of doom, the single currency has already outlived many of its harshest critics.

However, the EU is weakened by economic crisis and shaken by a sharp and awakening populism. Besides, the region is constantly facing creeping crises emerging from a looming Brexit, growing apathy towards its longstanding democratic credentials and institutions, fragmentations on the lines of monetary and financial resources, and, finally, territorial dislocation.

Initially, some Euro sceptics argued that in the absence of a shared political process, the Euro’s effort to bind together may lead to further breakups. But the currency has survived. Sometime in the mid of 2016, Nobel Laureate Joseph Stiglitz commented in his book, The Euro: How a Common Currency Threatens the Future of Europe, “The structure of the Eurozone has doomed the Euro currency to failure and if changes are not made, the region could suffer a breakup.” Even Stiglitz advocated for American type of institutions to carry on with the Euro, else, he signaled, it could be potentially dangerous for the EU.

But irrespective of having all the problems, the Euro is alive and kicking. It is so  because the immediate and future costs of departure for any member from the single monetary union could have been disastrous. Nevertheless, sensing a chaos around the Brexit and possible undercurrents of a nightmarish Grexit and Frexit might prove the Euro efforts a political misjudgment of sort. Naysayers may say so. But it is not.

Further to avoid the risks that the EU may encounter in saving the Euro or the big European project, it is time now to reinvent Europe. The continent demands new positive narratives to sustain its existing economic, political and social system. Also it must go beyond what Macron and Merkel think so as to reflect and encompass the emerging idea of Europe. The grand old political parties have to rethink and reshape their age-old dialogues and public engagement strategies to bring back the common populace to the political mainstream from the danger of looming populism.

The EU leadership is wading through serious political and economic turbulences. But then the individual member nations should not leave the responsibility of searching for an avant-garde solution only to Brussels. The uber bureaucrats at the EU headquarters need serious inputs the same way as is expected from London and Paris and also from Budapest and Tallinn.

Simply, the Euro ambling will not rescue itself and any of its members from the risk of it being doomed in future. Simultaneously, it is utopian to hope that iconoclasts like Corbyn and Marine Le Pen won’t be having audience beyond their party supporters. “Democratic disaffection” that is the rise of right and left populist parties and the way it shook Italy last year is potentially dangerous for a single market and a union with high hopes for the Euro. More and more political populism would bring pessimism. And, such trends may quickly call for a recalling of Euro and gradually, it may lead to distrust on institutional mechanisms like the EU. This may not herald peace and most importantly stability to Europe.

The Euro after two decades hopefully would not fall into what Zygmunt Bauman argued “Liquid modernity’ around the same time when the Euro was born. To him, post-modernity was a term erroneously used once and he wanted to replace it with his concept of liquid modernity implying “it is the growing conviction that change is the only permanence and uncertainty the only certainty. A hundred years ago, to be modern meant to chase the final state of perfection and now it means an infinity of improvement, with no final state in sight and none desired”. Though the single monetary union has completed twenty years, it has had the worst nightmarish experiences in the recent past. In July 2012, the European Central Bank (ECB)’s critical intervention saved the Euro. Further, when the near exit of Greece was avoided in the summer of 2015, another shock wave against Euro was prevented. But very little has been sincerely done to improve the governance system of the Euro Area (EA) since 2008.

EU President Jean-Claude Juncker in his State of the Union address made in September 2018 highlighted the strategic importance of the Euro. He also expressed the need to ensure that the single currency can play the role in the global sphere in full scale. He clarified that the Euro requires competing in the international market and it should fully reflect the Euro areas political, economic and financial weight.

By mid-December last year, the deal signed off by the EU leaders in Brussels foresaw a beefed up role for the EA bailout fund that will get greater powers over future financial rescues and stronger precautionary mechanisms. This deal highlighted the endorsement of a permanent lifeline to the EA’s crisis fund for failing banks. The summit, among other critical aspects also underlined a mandate to agree on the Budget of the EA by June this year. However, this was a major point of discord among the EA leaders those who have been widely divided over the need of such an instrument. Nations such as France advocated that this kind of measures will help eradicate financial shocks, whereas other members led by the Netherlands tried to prevent such deals saying that nations must focus on fixing their expenditures back home.

Amid raising high hopes for economic stability in the Eurozone, the summit finally left the budget for “competitiveness and convergence” for future dialogues. Experts say that the entire plan is thin on details and the leaders made no reference on the possible size of such a tool. In fact, the deal seemed to be hollow and missing the targeted goal as proposed by countries likes France to rescue weaker economies from economic debacles. Because, the leaders at the end agreed to use such facilities for “competitiveness and convergence”, namely helping poorer countries catch up.

Hope, the much-vaunted talk about the strengthening of the Euro comes into reality. Though Bauman is high on the agenda of liquid modernity, the total liquefaction of the solid structures of the industrial societies will probably never ever come into practice. But it is to be admitted here that the trend identified by Bauman and other scholars in Sociology undoubtedly signify a shift in the rate and form of social change that is fast occurring in Europe today. Hence not to survive, but to survive well, the Euro has to generate convergence in living standards than trying to create divergence. Today, despite all the odds, the Eurozone is heading for success. The reason behind is that the three quarter of the people in the Eurozone are favouring the currency, the highest since 2004. Another positive trend for Euro is that the members of the Eurozone have continuously expanded and it can explicitly be taken as a vote of confidence and growing acceptability for it.

Finally, it is good for the Euro that hardly any other alternative is left in the Eurozone for a new currency. Despite all the existing hurdles, all the members know that breaking up would be traumatic, both economically and politically. Further, such disintegration, if at all comes, would lead to the fall of the EU itself. The union was formed on the core values and principles around economic integration when some of the members initially started to communicate way back in 1951. It is also good that the Euro has forced some important reform measures across its members. The new trend that is surfacing across the EU and beyond brings home and magnifies social rootlessness, cultural hybridisation and shifting identities, particularly among the younger generation. Therefore while governing the Euro and Eurozone reforms with stressing permanence, certitude and stability, Brussels need to adjust and work on all new possibilities that are fast emerging in and around Europe. But it needs to be accepted that there is hardly any possibility of transforming the Eurozone into an optimal currency union in future.