Expect the worst in Valley

Expect the worst in Valley 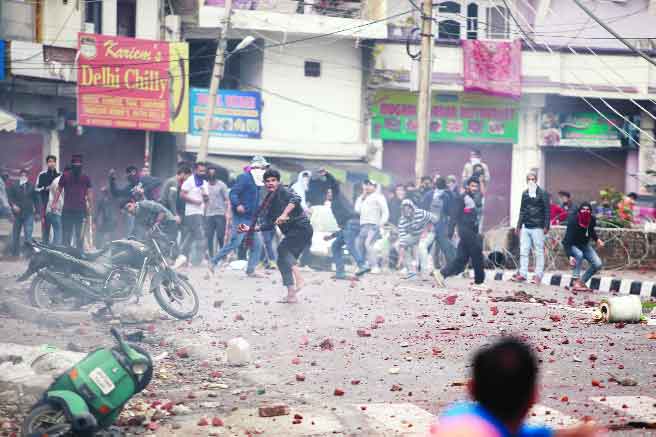 Asymmetric warfare, like the one India faces in Kashmir, abounds in bloody surprises. The enemy is theologically motivated and democratic discourse is at the bottom of the barrel

Cowardly, dastardly and desperate — these are some of the adjectives the Government uses when faced with surprise terrorist attacks on the armed forces. The recent deadly assault on the Central Reserve Police Force (CRPF) convoy in Pulwama, Jammu & Kashmir, was no exception. Enthralled by cricket a little too much, we somehow expect the terrorists to behave as bowlers in a gentleman’s version of the game. They would allow the batsman the time to adjust his pads, gloves and helmet and take a comfortable position on the crease before the ball is thrown at him.

But in an asymmetric warfare, where surprise is of essence, there is little scope for such niceties. On April 6, 2010, in Dantewada, Chhattisgarh, a Maoist ambush had led to the death of 76 CRPF personnel. Similarly, in Jammu & Kashmir, the Indian Army and the paramilitary forces are involved in an unequal war against the terrorists. The rules of engagement in an unconventional war differ widely from those of conventional conflicts.

Even in conventional conflicts, the combatants prioritise results over rules. Elaborate rules were drawn on the eve of the Mahabharata war. They were based on the concept of providing level-playing field and fair play. But as the war progressed, rules were more honoured in breach than in observance. However, none would disagree that the Mahabharata war was about principles. Even Lord Krishna had to succumb to the law of karma, by a hunter’s arrow stuck in his heels, because he had at times instigated Arjuna to uphold Dharma by contravening Dharma (killing of Karna and Jayadratha). Even Duryadhana, in Souptika Parva, grieved about surreptitious killing of the sons of the Pandavas while in sleep. But can one expect Hafiz Saeed to bemoan the killing of 19 Indian soldiers in sleep at Uri brigade headquarters? This is because a very different worldview of war inspires terrorists.

Brigadier SK Malik (of Pakistan Army) described it elaborately in his book, The Quranic Concept of War (1979). Its foreword was penned by none else than General Zia-ul Haq, who modestly signed as the Chief of Army Staff, though already the President of Pakistan. Brigadier Malik, making a reference to the Battle of Badr (624 AD), observed, “The Quranic military strategy, thus, enjoins us to prepare ourselves for war to the utmost in order to strike terror into the heart of the enemies, known or hidden, while guarding ourselves from being terror-stricken by the enemy (P 58).” We have to remember that the organisation, of which the suicide bomber was a member, is called the Jaish-e-Mohammad, meaning, The Army of the Prophet of Islam. Little wonder that the bomber was inspired by that worldview as described by Brigadier Malik. His purpose was seemingly to strike terror in the heart of the enemy.

In Jammu & Kashmir, terrorism has been on the rise during the last few years. While there were 322 and 342 incidents of terror in the State in 2016 and 2017 respectively, in 2018, their numbers rose to 600. More terrorists were neutralised in the corresponding period — 150 (2016), 213 (2017) and 252 (2018). However, more security personnel were also killed — 82 (2016), 80 (2017) and 91 (2018). As per a reply given by the Minister of State, Home, in Lok Sabha recently (January 8), an estimated 300 terrorists are active in the State. Net infiltration across the Line of Control has gone up significantly over the last two years. Thus, despite the zero tolerance policy and Rs 80,068 crore provided to Jammu & Kashmir under the Prime Minister’s Development Package, 2015, the situation in Jammu & Kashmir has not improved. This is in sharp contrast to the situation in the North-Eastern States. While insurgency is on the decline in the North-East, it is on the rise in Jammu & Kashmir.

Nobody seems to have a clue about what would work in Jammu & Kashmir. On November 3, 2014, two car-borne youth were killed in Chattergam (district Budgam) in the outskirts of Srinagar by Army bullets. Driven by teenagers, the car apparently did not stop at the check post, making the Army suspicious. The outrage over the incident forced the Army to institute an inquiry into the incident. Nine soldiers were ultimately indicted for the killing. The Army was compelled to issue an apology over the incident.

A month later, on December 8, 2014, Prime Minister Modi in his speech at Srinagar took credit for the Army issuing an apology over the Budgam incident. He said that this was the first time that the Army had apologised. “Modi sarkar ka kamaal dekhiye…” It gave an impression that the Army is a habitual offender, whom no Government had the gumption to take to task before. The Budgam outrage forced the Indian Army to be guarded in its approach towards private vehicular movement. Had it been otherwise, possibly Pulwama could have been prevented.

The worsening of democratic discourse in the Valley is another cause for concern. The voter turnout was a meagre two per cent in the Srinagar Parliamentary Constituency bypoll in April, 2017, which was won by National Conference (NC) chief Farooq Abdullah. The re-polling in 38 booths actually proved worse than the actual bypoll, which had seen seven per cent voter participation, and, hence, was countermanded. The local body elections in October, 2018, saw voters’ participation in single digits, the poorest show in three decades.

The proliferation of Wahabi-controlled mosques in the Valley over the last 10-15 years has changed the nature of insurgency in Kashmir, traditionally influenced by a comparatively liberal Sufi version. The money for these mosques pours in from oil-rich Arab countries. They become a point of attraction for the Muslim youths. The Ministry of Home Affairs report on Kashmir (February 2017) recommended control of mosque, madrasa, print and TV media.

This is, however, not to negate the fact that religious identity is the fundamental shaper of conflict in Kashmir. Why else does the Muslim majority of the Valley, in contrast to Kashmiri Pandits, dislike parts of Hindu majority India even with Article 370 as a safeguard? Why were Kashmiri Pandits brutally assaulted and massacred until they decided to desert the Kashmir Valley on the sacred Shivratri of 1990? Why were their places of worship desecrated, idols stolen and destroyed? Why were Urdu posters, ‘Muslimon Jago, Hinduon Bhago, Jihad aaya’ (Muslims arise, Hindus quit, Jihad has arrived) plastered on the walls of Srinagar?

The return of the IED (Improvised Explosive Devices) in the Valley after a hiatus of a decade is a cause of anxiety. The solution to the Kashmir crisis, provided there is any reality, has receded from sight of late. The secession of Kashmir, on an Islamic plank, will make the position of Muslims in the rest of India vulnerable.

(The writer is an independent researcher. Views expressed are his personal)