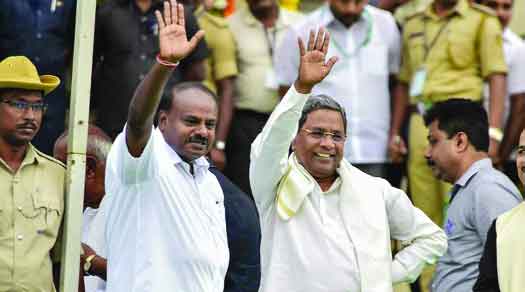 While the Karnataka Congress seems “drunk” on power games, what with its MLAs caught in a nasty brawl with liquor bottles being hurled liberally to decide whether one should stay with the JD(S) government or topple it,  the central Congress leadership must realise that it cannot afford to appear so in its quest for national relevance and must restore a modicum of discipline among party rank and file. It must realise that it has yet to build confidence among the electorate as a national alternative and should not be “drunk” over its recent electoral successes in Madhya Pradesh, Chhattisgarh and Rajasthan. Truth be told, it has barely made it and now has to do much more to win back trust, something that regional parties seem to command better at this point of time and is a glue of the federal front as a viable option. It also needs to understand that three Assembly victories are not enough to assume that it can strong-arm its way vis-a-vis allies and that resurgence cannot be seen as arrogance or greed akin to swamping propriety.

While one can charge the BJP with attempting a coup in Karnataka to expose the faultlines of the Congress-JD(S) alliance, can the Congress really afford to be swept up by the poachers’ trap and risk its image as an auctionable rather than an actionable party? It is sad enough that former Congress Chief Minister Siddaramaiah has had a hard time confining party MLAs to a plush resort to ensure they don’t quit the flock. It is a shocker that four MLAs still dared to defy the whip. And the grand old party, instead of chalking out strategies for the Lok Sabha election, has only been playing hide-and-seek games in this crucial southern state, quelling fistfights among legislators over joining the BJP just to get prized posts denied to them in the current regime. If the recent United India rally by the federal front leaders in Kolkata is any indication, then it amply proves that the Congress, in public perception, is very much the B-Team and in Karnataka has done a pathetic, iffy job as an ally. Clearly miffed by such shenanigans, Chief Minister HD Kumaraswamy lost no time in heaping praise on his West Bengal counterpart Mamata Banerjee, saying she was a “good administrator” and has all capabilities of leading the country, indicating that if need be, the regional parties could do without the Congress and could very well choose from many capable prime ministerial candidates among themselves. They could browbeat the Congress even further, which actually needs them more to give the emergency jet packs for political survival.

The Congress high command understands the need for continuity of its alliance government with JD(S) but has somehow desperately failed to impart some lessons in realpolitik to its myopic cadre. Siddaramaiah’s discomfort with the Gowdas is well-known and was visibly upset when his loyalists were kept out of the State Cabinet. A disturbing video leak of his critical remarks against the JD(S) had already cost the Congress in the initial days of government formation with chief Rahul Gandhi compelled to make him the chairman of the Congress-JD(S) coordination committee and ensure he was abreast of all developments in the government. The Congress must realise that it will lose all credibility and be considered an opportunist if it sinks Kumaraswamy. The latter, seen as a victim, will be expected to be open to other alliance partners. If the Congress cannot keep its MLAs together and ends up destabilising the government, then it can give up any hope of progressing in the state where a strong Vokkaliga backlash could grind it to dust. The Congress must realise that it has to have grace, humility and the wisdom of a kingmaker if it wants to have a stake in the Lok Sabha elections. It cannot afford to be a king yet, nor behave like one.