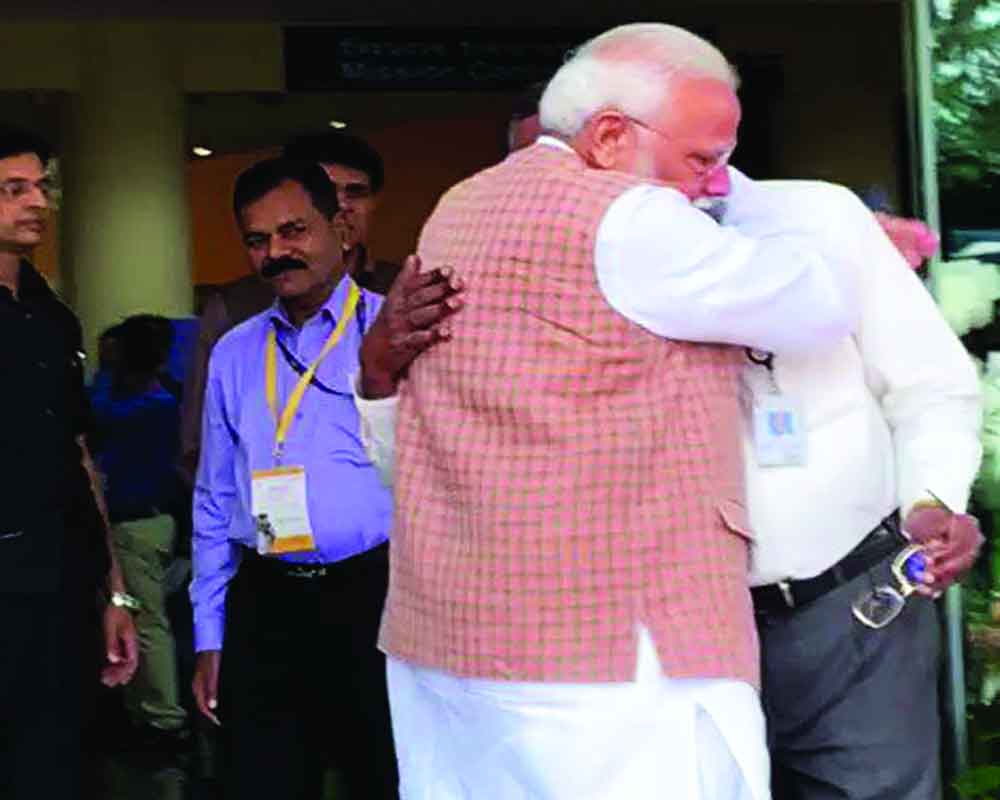 There is a performance zone in which we all thrive. When handling critical projects, teams not only require resources but also need to work in an environment free from distractions and disturbances so that they can achieve their objectives. It is always the last lap, “minutes of terror” rather, that defines the difference between success and failure.

A calm, sedate environment and resolute attention to micro-details are not only required but also expected. After investing so much effort in planning, if things go wrong, the team has to take all the negative consequences in their stride. Particularly when it is something as critical as a space mission that is on the global radar, apart from being a matter of immense national pride.

Something similar happened recently with the Chandrayaan-2 mission at the Indian Space Research Organisation (ISRO), an institution the country takes immense pride in. After the space agency lost communication with the Vikram lander ahead of the touchdown, the visuals on television sets were of bewildered and disappointed faces in the mission control room, which was crowded with clunky cameras and peering eyes.

A frustrated look here, a distracted countenance there, the devastation and tension was palpable and writ large on the faces of the staff, desperately trying to make contact with the Vikram during the final act. In their hearts, they were probably also praying to be left alone to do their jobs since a complication had arisen. It was not as if they didn’t know failures, the success of their launches has come through them. And perhaps, they are best equipped to handle their lows but not at the expense of being panned by the world.

The price of encroaching upon mental and physical spaces — no matter how slightly or reverently — comes at the cost of the team’s optimal functioning. It can handicap its focus on the crucial work at hand.

The sanctity of the operation control room cannot be violated. No external gadgetry or personnel should ever make way into the sanctum sanctorum. What if a short circuit happened due to faulty equipment brought in? There’s always the possibility of a camera battery catching fire or some such mishap. Where would that lead us? It was surprising to see such a risky act playing out freely in front of our eyes in the mission control room itself. The operation control centre is kept out of bounds to non-essential staff, personnel and gadgets. In the entire scheme of things, mission control rooms occupy a highly sanitised, secure, safe and secluded space, be it airports, ports or railway networks. And here we are talking about a space mission! Second, the world can wait. There is a difference between witnessing history and history being “made.” The witnessing part can wait. Let’s first focus on making the history. Let’s get the job done first. Successful execution should be the only priority, as compared to the rituals of receiving visitors and posing for the cameras.

There should be a provision for deferred live broadcast of such major events once the mission has been accomplished. It is not a soccer match for the public to enjoy; it is a highly nerve-racking scientific operation being played out at the far end of the galaxy. What is the point of adding to the pressure in an already highly-charged environment while our scientists are still remotely choreographing and delicately manoeuvering a space mission in the vast expanses of outer space?

The media circus surrounding the coverage of the event was as usual clichéd. But what came as a new low was some media personnel haranguing the scientists to bring none other than the ISRO chief to face their queries during a press conference. That was when the mission was still under way and operational issues were still being sorted! It also clearly shows how the space organisation has been left wanting in handling their communications protocols.

Barring a few exceptions, science journalism died long ago in the country. No wonder television channels thought it fit to send “political reporters” in droves to cover this specific event. The media’s wall-to-wall coverage was as usual clichéd. The core competencies of our television anchors to take on character-acting and dramatisation with ease comes quite naturally to them, just like a fish takes to the water.

It would have saved the day if the media and invitees were only allowed after the operations were definitively complete and a recorded minute-by-minute account was relayed to them, sans nail biting suspense, which only a handful of staff should be privileged to access and witness first, in a studied controlled environment setting. It would also have saved the technicians and scientists a lot of unwanted attention and pressure.

Also, in the light of the partial failure of the mission and the subsequent emotional breakdown of the chief, it would have saved ISRO a lot of embarrassment and heartbreak too.

The presence of top bosses, be it political or executive, might lift up the team’s spirit but it can also add undue pressure and divert attention and time. When there is a delicate and expensive mission waiting to be executed, a few milliseconds are all that it takes to make a difference between success and failure. Had India successfully landed the craft, it would have been the fourth nation in the world to land a vessel on the Moon’s surface, and only the third to operate a robotic rover there. The Chandrayaan-2 mission, which cost roughly $140 million, was intended to study the permanently shadowed moon craters, thought to contain water deposits, confirmed by the Chandrayaan-1 mission 11 years ago. However, that was not to be.

Whatever the loss, national pride or monetary, let us not patronise scientists by thumping their backs or wiping their tears. They need none of that. Perhaps none other than the scientific community knows it better and is accustomed to accepting failures with grace and humility before they hit upon success. That this is so was very evident from the encouraging and gracious responses of space scientists from countries, who have been part of failures and successes of missions like this. It is part and parcel of their daily routine and high stakes space missions. We just need to maintain a measured, respectful and dispassionate distance from those who are executing their work. It is their sole and primary responsibility to the nation to perform and maintain the integrity of the process without fixating on results. Nothing should come in their way. We should leave them to their devices and let their work speak eloquently.

Lastly, with such high stakes, it is also unseemly to see a lack of well-trained professional communication apparatus to handle such events. ISRO could have handled the media in a more nuanced manner. It is time that communications become a key component for the organisation in all its future endeavours.

Let us hope research organisations do not fall prey to or are smitten by media coverage but are only concerned with delivering feats that open up the next frontiers of science which Chandrayaan-2 was destined to do. Let us leave the scientific community alone; they know their job and they can deliver without falling into the trap of making everything into a televised spectacle.