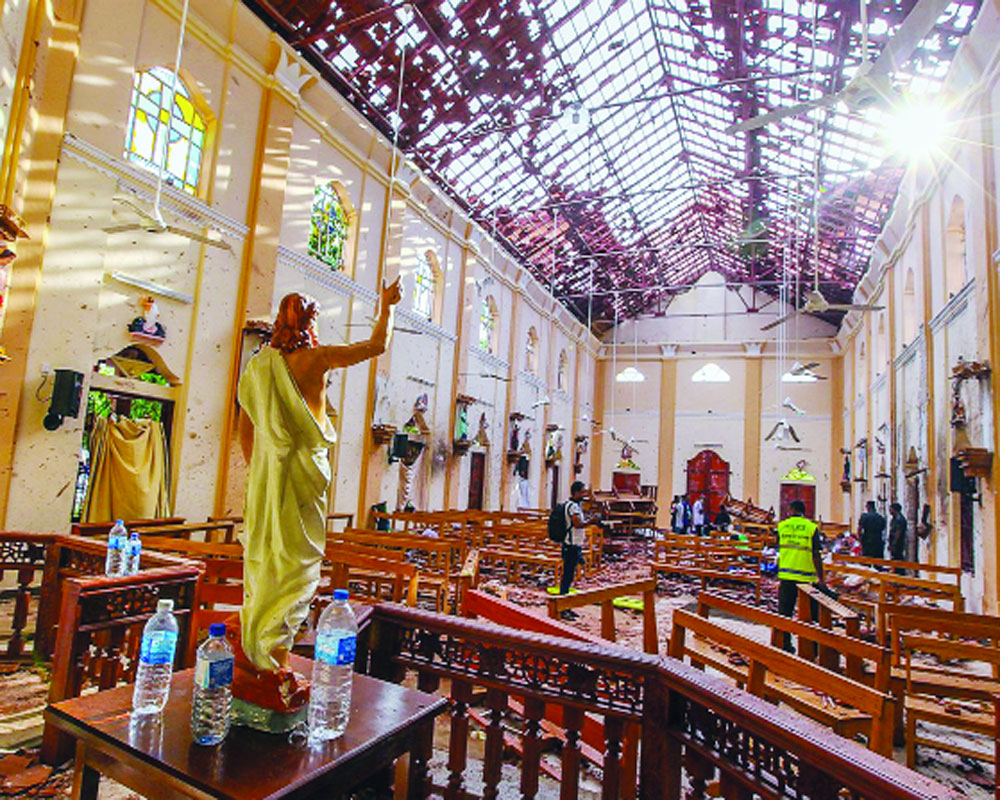 In a conflict between parallel enquiries into the Easter bombings, the question of accountability will be drowned. The Sirisena Government can’t evade tough questions by vilifying Muslims

Two months after the Easter bombings, while the dots have been connected, accountability is still playing truant. Besides others, India had alerted Sri Lanka on April 4, 10, 16, 20 and 21 but incredibly, security agencies in Colombo took no action. On this page, after the horrendous bombings, this writer had called the catastrophic event a mystery.

Both President Maithripala Sirisena and Prime Minister Ranil Wickremesinghe of what was once a National Unity Government of two rival parties have said they received no official information on terror attacks. Sirisena is the Minister for Defence and Minister for Law and Order, which place all intelligence, defence, security and police agencies under his command. The Minister of State for Defence for good optics is in Wickremesinghe’s Cabinet. While Sirisena has ordered a presidential commission to investigate the bombings, the powerful speaker, Karu Jayasuriya, has appointed a parliamentary select committee (PSC) for enquiry. The PSC has had public hearings aired on television which has upset the President, who has since prohibited all serving defence, intelligence and security officials from testifying before it. It has been boycotted by Sirisena’s Sri Lanka Freedom Party (SLFP) and Rajapaksa’s Sri Lanka Podujana Peramuna (SLPP).

Defence Secretary Hemasiri Fernando, who was forced to resign, told the PSC that intelligence was available on April 9 of a possible threat on April 21 and had assumed that Sri Lanka’s state intelligence services chief would have informed the President as was the practice. He added that as Defence Secretary, he could not meet the President — not even once in two weeks — as he had no time. The shocker was the revelation that Sirisena had told Fernando not to invite the Prime Minister, MoS for Defence and Inspector General Police, Pujith Jayasundara for National Security Council meetings since November 13,  2018, following the Constitutional crisis in which Sirisena had sacked Wickremesinghe and appointed Opposition leader and his presidential rival, Mahinda Rajapaksa, as Prime Minister, which was later revoked by the courts.

IGP Jayasundara, who refused to resign, was suspended by the President and  moved the courts, told the PSC that prior intelligence was available, giving specific details about the catastrophic intelligence failure adding: “No emergency was declared.” He said Sirisena offered him an ambassadorial post for his resignation, assuring him that the presidential commission would clear his name. Jayasundara struck the final nail in the coffin by saying there was “total unpreparedness of Government to act on intelligence reports.”

The head of national intelligence, Sisira Mendis, a former police chief who reported directly to the President, testifying before the PSC said that the bombings could have been averted. Mendis also said that the President failed to hold regular security meetings to assess the threat from Islamic radicals linked to National Towheed Jamaat (NTJ). Sirisena has dismissed Mendis.

Linked to the suicide bombings is the revelation that in 2018, the premier spy agency, state intelligence chief, Nilantha Jayewardene, ordered the IGP to stop investigating Islamic militants as well as NTJ. He also did not take seriously the information provided by India on the radical NTJ. While in India for Prime Minister Modi’s swearing in, Sirisena said there was no proof that the bombers visited India, contradicting Army Commander Mahesh Senanayake, who told BBC that they did go to India for training. Clearing himself of any responsibility for the intelligence failures, Sirisena said: “I was in Sri Lanka upto April 16 before going to Singapore on a private visit. None of the defence Chiefs informed me of any such intelligence”.

All that one wished to know about the nine suicide bombers is now in the public domain. Zahran Hashim, the radical preacher linked to NTJ from Kattankudy in Batticaloa, which has Sri Lanka’s biggest mosque, was the ring leader. How the suicide bomber inside Taj Samudra hotel panicked, walked out and blew himself up along with two others in a small hotel in Dehiwala suburb of Colombo is well-known. None of the nine bombers was impoverished, physically or mentally challenged, but all highly educated and affluent, two of them millionaires and all roped in by Hashim. It was a small group connected with Hashim.

Meanwhile, Sri Lanka’s capacity to self-destruct may be hurtling it towards another ethnic conflict. The majority Sinhala Buddhists, spearheaded by the clergy and political Opposition, have demonised the Muslims. Anti-Muslim riots, surpassing in scale the worst ones in 2018 in Digana, have occurred after the bombings. A false narrative of hatred and prejudice is being spread against Muslims. Fake tales about swords stored in mosques and mass sterilisation of Sinhalese by a Muslim doctor are being circulated.

Vilification of Muslims will further divide society as Muslims live across the country. Calling for unity among communities, it was disingenuous on part of Sirisena to warn them of the emergence of a Muslim Prabhakaran, an avoidable simile to the dreaded Tamil supremo of the LTTE who fought an ethnic conflict for three decades, ending 2009.

The mass resignation of two Muslim Governors and nine Ministers to enable the Government to conduct investigations, clearing them of linkages to suicide bombings, has opened a new front. Organisation of Islamic Countries (OIC) envoys based in Colombo have appealed to the Government to protect Muslims and their properties.

The presidential pardon to reactionary monk Gnanasara Thero, who was implicated in the anti-Muslim violence of 2018 and stormed a court hearing old cases of “enforced disappearances”, will add fuel to fire. Rumours against Muslims and anti-Muslim riots are a smoke screen to shift focus from the presidential and parliamentary enquiries to resurgent Sinhala Buddhist extremism directed at Muslims. The Government is drafting a legislation to change Muslim laws dealing with burqa, hijab, halal, mosques and madrasas in consultation with Muslim clergy and leadership.

The question of accountability will be drowned in the conflict between parallel enquiries reflecting the breakdown of the co-habitation Government. Why did Sirisena not know about the intended bombings and why did intelligence and security forces fail to act? Sirisena can only be investigated after January 2020 by a new President. But the broken-down Government cannot afford to wait to be fixed till after the elections.

The ultimate irony for Sri Lanka was when Wickremesinghe, after a meeting with Modi, who was on a five-hour visit to Colombo this month, sought India’s help in counter-terrorism. Since 2009 after vanquishing LTTE, Colombo has proudly showcased its unique prowess and skills in eliminating root and branch, terrorism in the 21st century — a historic first!