Gandhi for generations ahead

Gandhi for generations ahead 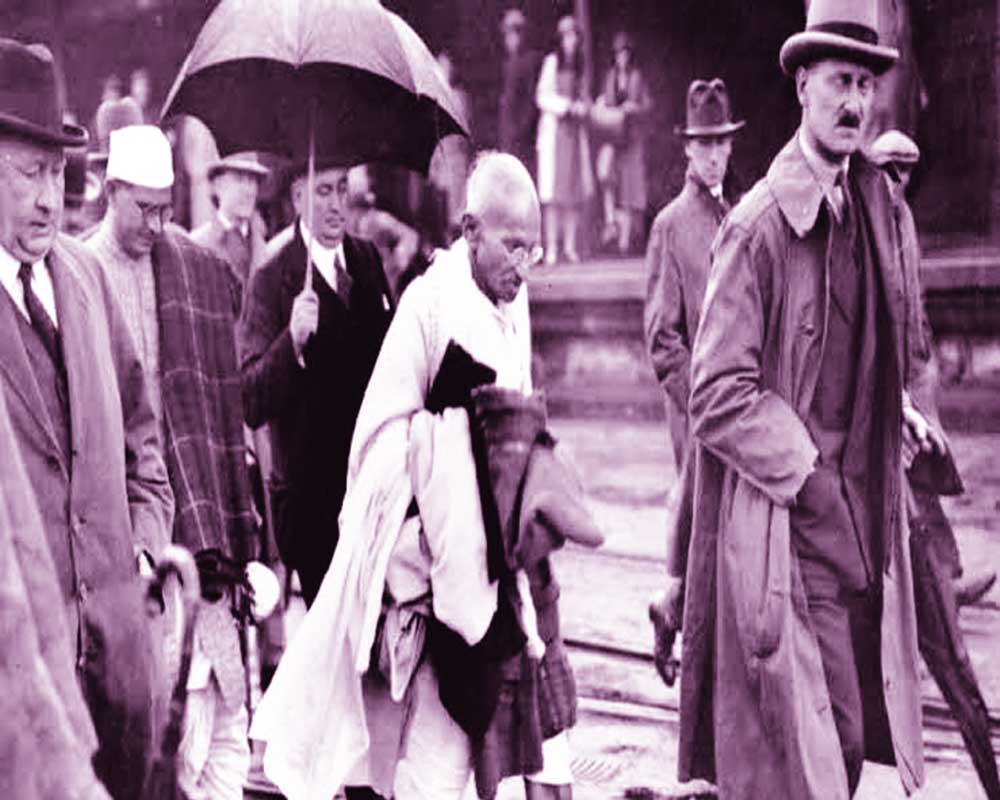 As we celebrate the 150th birth anniversary of the Mahatma, we will do well to re-think about his values, principles and goals, which have been ignored rather unhesitatingly

In every informed/learned deliberation or debate on global peace and inclusive growth, equity and social justice, progress and development, Mahatma Gandhi invariably makes his presence felt. Someone from somewhere — some corner of the globe — would be there to make a point, quoting Gandhi. The specific issue could  be vast and varied — democracy, agriculture, war and violence, peace and non-violence, racial and colour prejudices, social uplift, educational deprivation, cultural seclusion, nature cure, man-nature relationship, climate change, water concerns — one can think of any aspect and the Mahatma would be relevant.  More often than not, a mention about  him or his thought invariably freshens-up the trend of “intellectual deliberations”, which is  mostly a repeat of what has been uttered umpteen times earlier.

One is convinced that this trend to recall and remember Gandhi has strengthened in the last two decades. Yes, the very survival of human race and planet Earth is at stake. This is no more an Utopian fantasy but a reality looming large on the horizon. Gandhi is becoming increasingly relevant globally to an ever-increasing number of concerned and informed citizens, international organisations, Governments and people. In his lifetime, what impressed his fellow workers and followers were his clarity, integrity and transparency. His colleagues and followers were greatly impressed by his ever-growing and evolving personality. People were attracted to him and his thoughts as his persona represented harmony with humanity and his personal life represented a soothing symphony of thoughts, words and deeds.

It must be accepted and acknowledged that after Independence, India and its new rulers were more convinced about the suitability of the Western model of progress and development. They went ahead with it, forgetting about the Gandhian model and values.  The consequences are before us: Erosion of human values, treachery of the rich, defects of elections, injustice, wanton exploitation of natural resources, increasing distrust and decreasing social cohesion and religious amity. The principle of trusteeship of the future generation stands painfully shattered.

Only Gandhiji could say to the entire world: My life is my message. We have observed the transformation that happens once one is elected as the people’s representative and when he/she can be placed in the position of power. In fact, transformation is inevitable and it is the direction of change that matters. The Mahatma boldly admitted his mistakes, both personal and professional, and even reversal of his own ideas. On April 29, 1933, he wrote in his weekly publication, Harijan, that he was not at all concerned with appearing to be consistent: “In my search for truth, I have discarded many ideas and learnt many new things. Old as I am in age, I have no feeling that I have ceased to grow inwardly or that my growth will stop at the dissolution of the flesh. What I am concerned with is my readiness to obey the call of truth, my God, from moment to moment. Therefore, when anybody finds inconsistency between any two writings of mine, if he/she still has faith in my sanity, that person will  do well to choose the latter of the two on the same subject.”

An interesting example is that of his support to the cutting of palm trees for the production of liquor from its juice. When Gandhiji came to know that the same juice could be used to prepare good quality jaggery, he supported planting of more palm trees to help the village industry to produce jaggery locally.  His life is a saga of his growing up, striving for it and in the process, always keen to learn more and practise what he likes. Could one imagine how indomitable his spirit to learn was as he took a lesson in Bengali on the day of his assassination on January 30, 1948.

It is worthwhile to recollect that as a child, during one of the school inspections, he refused to copy the spelling of the word “kettle” from his neighbour in spite of hints to do so by his teacher. He tells us in his autobiography, The Story of My Experiments with Truth, that all other boys spelt every word correctly. The teacher tried later to bring his stupidity home, without any effect on Mohandas. He wrote: “I never learnt the art of copying.” He decided to go to England for studies in spite of resistance from the community and even his mother. Growing up in a family with strong Vaishnavite traditions, he candidly narrated how he experimented with eating meat, indulged in stealing to pay for his brother’s debt. Inner remorse made him write a letter to his father, accepting the guilt and seeking appropriate punishment. His father read the letter, with tears rolling down his eyes, he said nothing.

Mohandas, who was there, also cried but the incident sowed the seeds of a realisation that lasted a lifetime: Truth is to be pursued at any and every cost. This should be the path to be followed, no diversions and deviations, under any circumstances. The Mahatma’s life abounds in crystal clear transparency, total harmony and symphony of thought, word and deed.

Young Barrister MK Gandhi went to South Africa, commissioned by Seth Abdullah, to assist him in a dispute that was pending in the court of law, though the opposing parties belonged to the same extended family. The young lawyer, after studying the case and inferring that such matters are best resolved within the family, suggested a compromise. Normally, no lawyer would commit such a Kalidas Act. Sincere welfare of others was ingrained in the Mahatma’s psyche predominantly because of family traditions and sanskaras.  It became evident on umpteen occasions in his life, which offered him numerous varied experiences, each one of which he converted into a learning opportunity. In the initial years in South Africa, he had several life transforming experiences, which could have traumatised any person but every time these could only enhance his determination, perseverance and resolve to stick to his principles. These were frequently related to racial discrimination and color prejudice.

In each case, MK Gandhi went deep into the root cause of hatred that existed among  human beings on the grounds of race, creed, caste and colour. One cannot but mention what a transformation took place at the Pietermaritzburg  railway station when the young Barrister was attacked, humiliated and thrown out of his rightful place in the coach. That night, Gandhiji transformed himself from a “person to a personality.” He expanded, rather universalised, his horizons of ideas, thought, commitment and determination, something only rare blessed souls could achieve in human history. The pain, hurt and humiliation inflicted on an individual was projected on a global canvas: Why generations of human beings across the globe have suffered unacceptable discrimination, humiliation and exploitation for centuries?

An American, Dr Mote,  asked Gandhiji at a much later stage about the most creative moment in his life, to which he responded that though there were several incidents, he could recall the one at Pietermaritzburg, which was the “most creative.” To me, it was the beginning of his personality transformation and subsequent emergence as the Mahatma. His struggle and leadership in India was not limited to attain freedom alone but it left no aspect of human life untouched.  He was overwhelmed to observe how people were enduring humiliation without resistance.

He had begun internalising the essence of: Je peer parai Jane re. He wanted everyone to live a dignified life. Everyone has to be empowered and he found that khadi was one such tool that could contribute immensely in restoring self-confidence, dignity and sense of belonging. He wanted the focus of plans and programmes in free India to be woven around the self-sufficiency of Indian villages.

Luminaries and leaders in every walk of human endeavour were influenced by Gandhiji and this shall remain a continuous phenomenon in future as well. It would make for a great list: Nelson Mandela, Martin Luther King, Jr, His Holiness the Dalai Lama and Barack Obama included. Not many may recall the novel, The Good Earth, and its great Nobel laureate author Pearl S Buck, who gave such a touching tribute: “He was right; he knew he was right, we all knew he was right. The man who killed him knew he was right.” Decision-makers could find time to ponder over what Einstein had to say about Gandhi: “I believe that Gandhi’s views were the most enlightened of all political men in our time.” Einstein considered Gandhiji a role model for generations to come. What India must seriously consider is this: How could the trusted heirs of Gandhi, once in positions of power, ignore his values, principles and goals rather unhesitatingly but without ever saying so.  Could a serious re-think emerge out of the 150th birth anniversary celebrations?