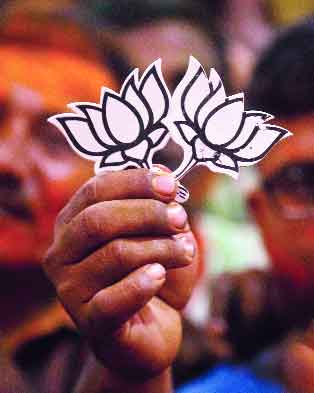 The nation hopes that with this resounding majority and consequent political stability, the Prime Minister will succeed in actualising his own vision and India’s unbound aspirations

The BJP was well on its way to emerging as India’s ‘natural party of Government’ under the leadership of Atal Bihari Vajpayee when its hope was rudely dashed in 2004 after the “India Shining” campaign slogan backfired and the party lost decisively. Few expected the UPA 2 Government to return to power under the low-profile leadership of Manmohan Singh in the 2009 polls. But the unexpected happened and the BJP’s exile from power got extended by another five years. However, under the muscular charge of Narendra Modi, the BJP bounced back with a stunning majority in 2014, pushing the Congress’ tally to a paltry 44 seats in the Lok Sabha. The 2019 poll results demonstrate that apart from setting new benchmarks in India’s parliamentary history, the BJP has successfully crafted a new record of continuity of personality and policy. Arguably not every section of the electorate is delighted by the BJP’s overwhelming triumph, but all have accepted that its footprint across the entire country is unmissable now.

Once derided as a Brahmin-Bania party whose influence was confined to the Hindi-speaking States of North India, the BJP has broken through political and cultural barriers in the South, East and North-East of India this time. This is a humongous achievement for which the party’s charismatic leader Prime Minister Narendra Modi and tireless strategist Amit Shah can justifiably claim full credit. Commentators have attributed its spectacular victory to a combination of robust nationalism of the Balakot kind, a series of populist doles such as LPG gas cylinders to placate the underprivileged and a powerful dose of Hindutva. Many of these schemes and ideological predilections are not original. Some were directly borrowed from the predecessor UPA while the ideological positioning clearly bears the newly emboldened RSS’s imprint. For its policies to outlast a five-year term and become ingredients of the BJP’s ambition that it should become part of the “natural party of governance,” there has to be a degree of balance and conciliation which has not been evident in the ruling party’s style so far. Narendra Modi’s combative approach may have endeared him to the national electorate but this may not always work in a complex society which requires consensus and conciliation rather than confrontation. The Time magazine’s recent cover story describing the Prime Minister as India’s divider-in-chief was certainly not a complimentary epithet. Although palpably exaggerated and symptomatic of typical Western media bias, Modi would do well to go in for an image makeover to emerge as an unifying rather than a divisive force. It is apparent that most of the minorities, particularly India’s 185 million Muslims, have a deep distrust of the Prime Minister. This may not be justified as the NDA Government’s policies evidently do not target Muslims adversely, but perceptions matter a great deal in shaping attitudes. Therefore, NDA 3 will need to work consciously to dispel the impression that India might get transformed into a Hindu-majority Pakistan. The political rise of rabble rousers like Sadhvi Pragya Singh Thakur up the BJP’s ranks is certainly not reassuring in this context.

Apart from the social anxieties, the country’s economic health report during Modi’s first tenure has hardly been inspiring. Although, Modi managed to dust economic issues under the carpet through a skillful mixture of demagoguery and populist policies, the fact is that the fundamentals of the economy are shakier than during the UPA era. The truly worrying part is the stagnation of industry, credit squeeze and sharp drop in consumption. It was assumed in 2008 that the Government would come up with an incentivisation package and then Finance Minister Pranab Mukherjee did just that in the aftermath of the 2008 global slowdown. It is not too late even now to revive such a plan as tighter controls on tax collections have led to robust revenue growth. Modi may have successfully prevented jobs and distressed farmers’ issues from dominating the election agenda. But merely ignoring them will not make the issues disappear. While doles such as the PM-Kisan Yojana may be temporary palliatives, in the long run, they cause irretrievable damage to the economy.

The new Government also needs to work hard to formulate a clear foreign policy, especially with an eye on the neighbourhood. A mischievous western neighbour is perennially backed by an expansionist northern neighbour, and together they keep tensions alive in the region. Terrorists sponsored from across the border force India to be permanently on tenterhooks; by fomenting unrest in Jammu & Kashmir, Pakistan keeps provoking us routinely. New Delhi needs to have a clear Zero Tolerance Policy, necessitating physical demonstration of its exasperation. Modi has built a reputation as a no-nonsense leader, ready to hit back through surgical strikes across the border and other measures, including economic blockages. The Prime Minister must remember that he is expected by his myriad supporters not only to act but must also be seen to act. India has made invaluable diplomatic strides in Modi’s first term. Undoubtedly, our relations with the US, China, Japan, European Union and other powerful nations and blocks have shown marked improvement. This policy needs successful upgrading to position us as a superpower in the making. Similarly, India’s space programme is among the world’s most coveted. During Modi’s second term, the country’s first manned mission to space, Gaganyaan and spacecraft to the Mars, Mangalyan, will get launched putting India in an altogether different league.

As the saying goes, there is so much to be done but so little time to do this. But the Prime Minister himself coined the slogan “Modi hai toh mumkin hai. (Everything is possible with Modi at the helm).” The nation hopes that with this resounding majority and consequent political stability, the Prime Minister will succeed in actualising his own vision and India’s unbound aspirations. The Prime Minister recently spent two days meditating at the holy Kedarnath cave. Lord Shiva would have blessed him then to fulfill our collective dreams.