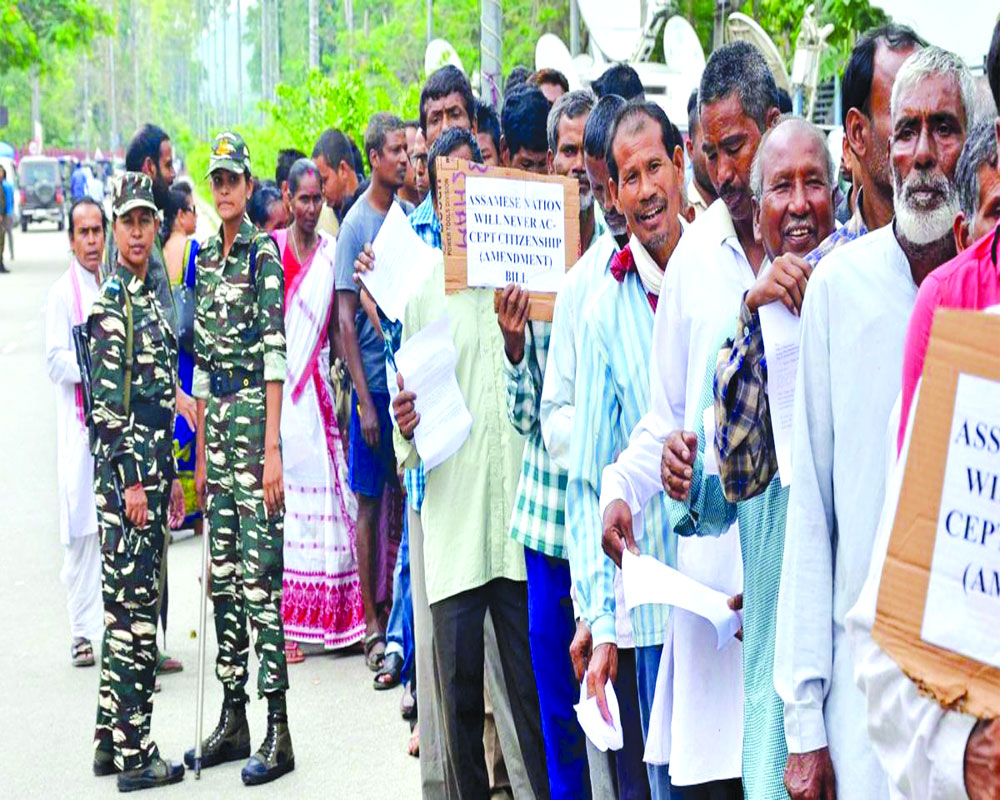 Finally, India has a Government at the helm which cares for Hindu refugees. By passing the Citizenship Amendment Act in the Lok Sabha, the Modi regime has tried to correct a past folly

Ever since the Narendra Modi Government moved the Citizenship (Amendment) Bill, 2016 in the Winter Session of Parliament to provide critical support to the adherents of Indic religions, who face virtual extermination in neighbouring Islamic nations like Pakistan, Bangladesh and Afghanistan, the usual pseudo-secular suspects have crawled out of the woodwork and once again raised the hackneyed argument about how ‘Secular India’ can make special provision for the persecuted Hindus, Sikhs, Buddhists and Jains in India’s neighbourhood.

The Bill, which has been passed by the Lok Sabha, seeks to provide critical humanitarian support by way of citizenship to persecuted religious minorities  in India’s neighbourhood belonging to Indic religions, the Parsis and the Christians. This ought to have been done soon after the creation of Islamic Pakistan in August, 1947, because the new nation was inaugurated with bloody assaults on religious minorities. The Bill, which seeks to correct the Indian state’s seven-decade-long criminal neglect of its primary responsibility towards the oppressed minorities of Indic origin, speeds up the process of grant of Indian citizenship to those who are forced to seek refuge in India. It also seeks to release them from some of the rigours of the Foreigners’ Act and the Passport Act.

The Bill seeks to address a congenital malady that the then Prime Minister Jawaharlal Nehru ignored. While India declared itself a secular state which guaranteed equal rights to all citizens when it became independent, Pakistan became an Islamic state and offered no such guarantees to its religious minorities. Apart from the bloody riots at the time of Partition, a systematic pogrom began in Pakistan against the Hindus and other Indic communities. This campaign largely promoted by the Pakistan state reached such proportions that the Prime Ministers of the two countries met for several days in New Delhi in April, 1950, and eventually signed what is known as the Nehru-Liaqat pact which “solemnly” assured that the two Governments would ensure “complete equality of citizenship, full sense of security, personal honour, freedom of culture and worship” to all religious minorities. The pact also guaranteed equal rights for minorities to hold political office and said both nations would take steps to enforce them effectively. However, while India incorporated all these guarantees for minorities in its Constitution, Pakistan did not do so. It just made a mention of it in the objectives resolution adopted by its Constituent Assembly. Even as the Pakistan Prime Minister returned to his country, the pact proved to be a sham.

This is a 70-year-old tragic tale that is still being played out but at least now there is a Government in Delhi which has the gumption to stand up for the persecuted minorities of Pakistan.

Those opposing this humanitarian legislation are claiming that specific relief to adherents of Indic religions threatens India’s “secular fabric.” This is in line with the moth-eaten anti-Hindu policies devised by Jawaharlal Nehru and carried on by the Congress and its Marxist fellow-travellers all these years. Here are some reasons why this pseudo-secular policy framework, which is basically anti-Hindu and meant to deny Hindus their natural right to live in or return to Bharat, which has been their homeland for millennia, must be thrown out lock, stock and barrel:  Ever since the creation of the Islamic state of Pakistan in 1947, hostility towards the religious minorities has been rampant in that country. How ruthless the Muslims of Pakistan have been towards these minorities is evident from the following statistics.

In 1941, adherents of Indic religions constituted 19.69 per cent of the population of Pakistan. The Islamic state came into being on August 14, 1947, and within four years, the population of Hindus, among others, had crashed to 1.59 per cent. Four decades later, it hovered around the same figure and stood at 1.64 per cent and has been thereabouts ever since. So, what happened to the Hindus of Pakistan, who constituted one-fifth of the population of that nation when it was born? They were either slaughtered or converted, while some sections of them, who could no longer bear the persecution, crossed over to India. However, despite their pathetic plight, the Congress, completely under the grip of Jawaharlal Nehru’s pseudo-secular policies, refused to speak up for them and raise its voice against this appalling tragedy, because the Congress’ brand of “secularism” prohibited it from speaking up for Hindus et al even if they were being systematically exterminated. Also, Nehruvian “secularism” forbade the party and the Union Government from offering succour to the Hindus who came in as refugees. This grossly inhuman approach to the plight of the Hindus in Pakistan continued during the Indira Gandhi and Rajiv Gandhi regimes as well.

To begin with, Pakistan comprised west and east Pakistan but the eastern wing broke away, leading to the creation of the Bangladesh, which has Islam as its state religion, in 1971. However, the vivisection of Pakistan did not provide much relief to the persons belonging to Indic religions, as can be seen in the figures given below: In 1941, the adherents of Indic religions constituted 29.61 per cent of the population of what is now Bangladesh. This declined to 22.79 per cent in 1951 and had dropped precipitously to 11.10 per cent in 1991. Recent estimates put the percentage of these religious minorities in Bangladesh to below eight per cent. During these six decades since 1941, the percentage of Muslims in Bangladesh has risen from 70.26 per cent to over 90 per cent. (Those who wish to learn more about the tragic plight of religious minorities in the Islamic states bordering India must read Religious Demography in India, a comprehensive work that will shake the people out of their pseudo-secular slumber, authored by AP Joshi, MD Srinivas and JK Bajaj of the Centre for Policy Studies, Chennai. The figures cited here are from this work).

Meanwhile, as the Hindus, Sikhs, Buddhists and Jains vanished from the demographic charts of Pakistan and Bangladesh, the Muslims thrived in democratic India. They were around 35 million at the time of independence and constituted 10.43 per cent of India’s  population in 1951.  In 2011, the Muslim population in India had crossed 14.20 per cent and in real terms stood at 172 million. Yet, India should not offer shelter to the Hindus who are fleeing the Islamic states!

There are a dozen more reasons why the arguments of the Nehruvian and Marxist schools must be treated with the contempt they deserve. The Citizenship Amendment Bill, 2016, introduced by the Modi Government is, therefore, a crucial piece of legislation to correct a historic wrong perpetuated by Nehru and his followers over the last 70 years.