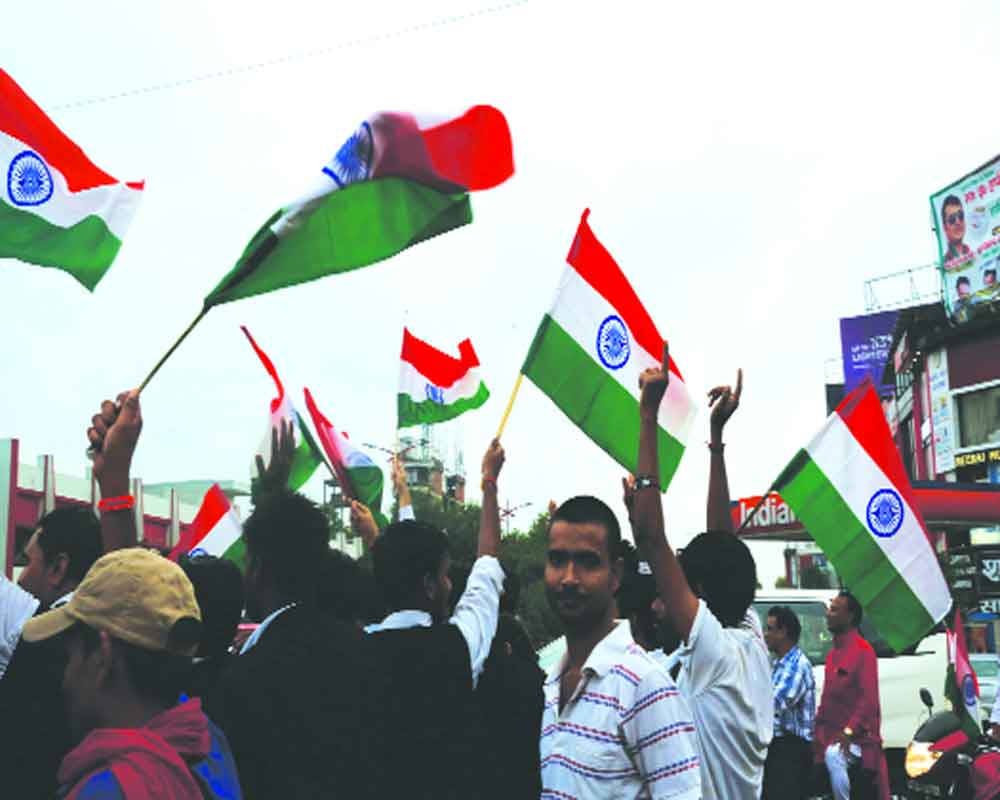 New India must understand that maximum power is also about maximum embrace, not about threats but reassurance

The nation turns 73 today, ripe-old considering its milestones that have mapped impossible dreams to catching them and literally going to the moon. Young, considering its evolutionary experiments as a post-Independence democracy, one that is still churning with ideologies to find its place. Yet, it is also an age where the old order is fading away and a new one is filling the vacuum, desperate to shake off the shadow of the past and create its present moment in the sun. And it is in this transit moment that we must stop and introspect, where the tidal gush of a Naya Bharat tends to swamp the old, which laid the course in the first place, and understand that time and contexts decide our human responses, that everything is relative and history is a timeline of phases and considered action taken, not about comparative records. And so it is that the nation is on the threshold of a time where the conflict worldwide is over patriotism and nationalism, the former, in the words of Charles De Gaulle “is when love of your own people comes first” and the latter “when hate for people other than your own comes first.” Sadly, we are lumping our “own” as “others.” In a post-globalised world of sameness, where institutional systems and thought processes of the West have colonised mindsets and policies as the prescribed liberal doctrine, identity politics has been simmering, erupting and is now hyper-assertive. Therefore, muscular nationalism as an emerging credo has not left us untouched either. The Goliathic right-wing phenomenon is a product of this sentiment, one that wants to wave billowing flags at every street corner than put a mini Tricolour replica on the car dashboard.

Prime Minister Narendra Modi has addressed an inner angst of Hindu identity and majority stakeholdership, one that has been projected to be diluted or rewritten, first by invasions and imperialism, second by colonial hangovers of liberalism. Despite 80 per cent of the population being Hindus, politics in our democracy has been defined by accommodating segmented votebanks, be it of caste or religion. Truth be told, secularism has never been treated as syncretism or absorbing religiosity of all kinds but more like an overt propagation of sectarian interests. The Right wing has just turned years of denial of Hindu rights, rather emotions, and preferential molly-coddling into a plank to build a brand of a socialist republic called One India, pivoted on an Indic consciousness. The “India First” aggression, of course, has had its positives — holding our own to global bullying, thwarting external threats, increasing global stakes, carving an Oriental counterpoint to prevalent Western cliches, protecting our national well-being, fuelling space-age goals and building ethnic pride. This craftsmanship has indeed worked in breaking the status quo and encouraging paradigm shifts, acceptable simply because of the transformative persistence it comes with. And though there’s much to be desired on economic indices — industrial slowdown, lack of innovation, the agricultural crisis and joblessness — the new regime has bridged the traditional class cleavage and the dole economy by pivoting economic criteria as deciding benefits, where the battle would be to equalise the haves and have-nots. A massive electoral mandate has followed the simplicity of these binaries and a redefinition of the socialist economy. But one cannot overlook the social ramifications. And India has flourished only when it has appreciated the complexity of our delicate diversity. People have to be taken along in a consultative partnership and not as an asset base that can be weaponised or victimised at will. Maximum power is also about maximum embrace, not about threats but reassurance, not about undoing wrongs but avoiding making new ones. One where consolidation of power, howsoever strong, shouldn’t run counter to the spirit of Constitutionalism or consider it a stumbling block. Indian secularism is not simply a product of politics but is ingrained in our civilisational DNA as a social grace that had us on the frontline of world trade as it existed through the Silk and Spice Routes. Neither should the enlightened few abdicate their responsibility to raise questions. Undoubtedly, we have the leadership needed to take the country along. Now only if we could follow Swami Dayanand Saraswati’s philosophy —  “No human heart is denied empathy. No religion can demolish that by indoctrination. No culture, no nation and nationalism, nothing can touch it because it is empathy.”