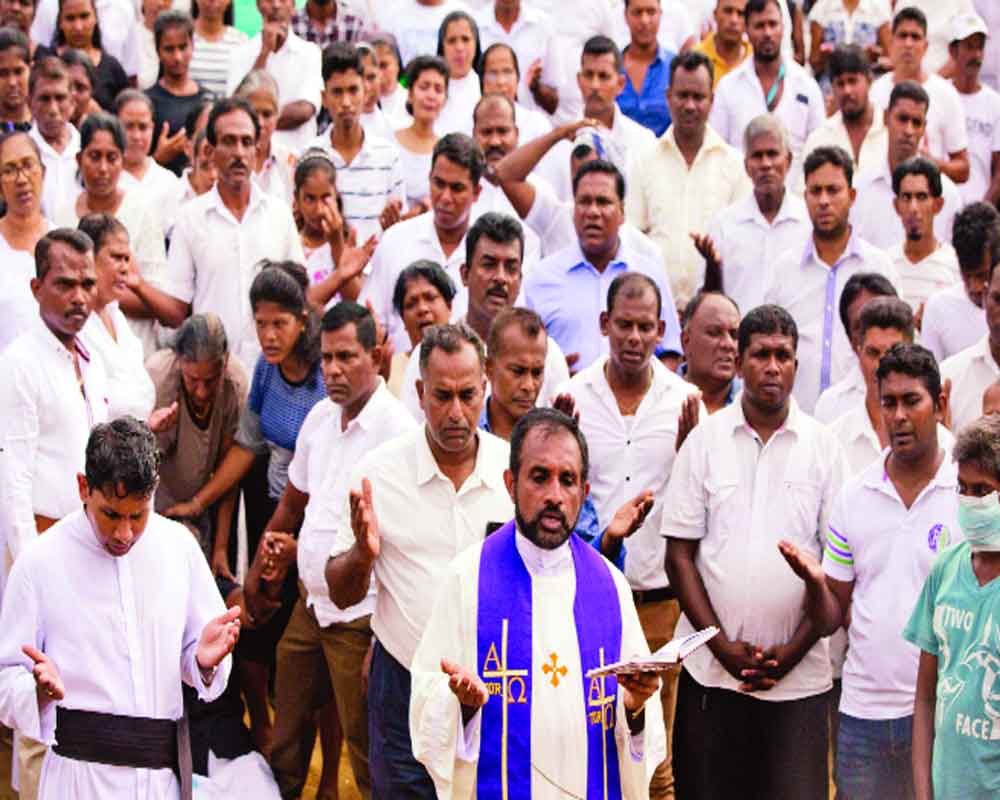 Muslim assertiveness is not new in Sri Lanka. But for the first time, the community has turned against Christians. The provocation seems to be imposed rather than indigenous

Sri Lanka is no stranger to violence — a complete generation underwent the ordeals of the Tamil-Sinhala Civil War (1976-2009). But the serial blasts that bloodied the Easter celebrations in the island last Sunday were on a different plane. Its roots seem to puzzle those who had studied the history of Sri Lanka.

Tamil insurgency was an outgrowth of bad blood between the two ethnic communities viz, Tamil and Sinhala, in post-colonial Sri Lanka (then called Ceylon). These two communities, unequal in size and  inhabiting different geographical zones of the island, once viewed themselves as co-founders of the island’s civilisation. For one complete century between the Colebrooke-Cameron Reforms (1829-32) — which gave colonial Ceylon a legislative council — and the Donoughmore Commission (1931), when territorial elections were introduced, the relationship between the Tamils and Sinhalese deteriorated sharply.

The Tamils, though in a numerical minority, could previously take a much-relaxed view as long as their representation in the Council was the same as the Sinhalese. But as political reforms progressed in the crown colony, relationships worsened under the shadow of Sinhala majoritarianism. The Tamils were the makers of modern Ceylon. But they found themselves falling from the frying pan to the fire after Ceylon gained independence.

Between 1951 and 1976, one finds Tamils trying to fashion various political responses to the Sinhala clout. Then finally came the Vaddukoddai Resolution (May 14, 1976), which pitched for an independent “Tamil Eelam”, an expression first used in modern time as early as 1923 by Sir Ponnambalam Arunachalam (1853-1924). The uncrowned king of Ceylonese Tamil civilian politics viz,  SJV Chelvanayakam (1898-1977), exhorted the Tamil youth to take up arms to resist Sinhalese hegemony.

An independent Tamil Eelam was, thus, not the brainchild of either the Tamil Eelam Liberation Organisation (TELO), or the Liberation Tigers of Tamil Eelam (LTTE) or People’s Liberation Organisation of Tamil Eelam (PLOTE). But a resolution passed by those politicians who had tried to handle the issue by Constitutional means for far too long without any success. The situation erupted into a bloody, messy and cruel civil war that lasted for three decades. It ended in May 2009 with the defeat of the LTTE by the Sri Lankan Army, accompanied by the carnage of Tamils caught in the crossfire.

The Easter bloodbath, on the other hand, does not seem to be an outgrowth of natural politics. It was directed against Christians (regardless of ethnicity) and foreigners, who stay in plush hotels like Shangri-La, Cinnamon Grand and Kingsbury in Colombo. The blasts coincided with the US-Sri Lanka Naval exercise off the Hambantota Port, owned by China on a 99-year lease.

The Sri Lankan Government found the blasts to be the handiwork of Islamic radicals, and the Islamic State has claimed responsibility for the bombings. Both Christians and Muslims are small minorities and do not hope to play an independent role in the overall politics of the island. They do not have a history of turning against one another as a group either.

The Muslims, who have a dominant presence in eastern districts like Batticaloa and Trincomalee, could still foster some territorial ambitions. But Christians, who are to be found both among Sinhalese and Tamils besides Burghese (who are Anglo-Indians in Sri Lanka), can at best manage to influence politics as part of some group.

Various Prime Ministers and Presidents of Sri Lanka, right from DS Senanayake to Mahinda Rajapaksa, have had a Christian family background. Christian presence in Sri Lanka goes back to Portuguese invasions in the 16th century. Various Sinhalese (Buddhists) and Tamil (Hindus) had converted to Christianity. But as the Donoughmore Commission (1931) recommended franchise base on territory, many of those leading families re-converted to Buddhism to ingratiate themselves to the masses. They are generally referred to as “Donoughmore Buddhists.”

Interestingly, it was such families, who remained at the helm of Sri Lankan politics but it was not before Ranasinghe Premadasa (1924-1993), a genuine Buddhist, who became the Sri Lankan President, that they held an official post. However, such re-converted families were never shy of using Buddhism as a state policy to marginalise the Tamils.

Those who remained Christians (amongst Sinhalese and Burghese) felt political power passing away from their hands. In January 1962, there was a “Christian coup d’etat”, popularly called “Operation Holdfast”, to overthrow the democratically-elected Government of the then Prime Minister Sirimavo Bandaranaike. The top brass of the Army, Navy and police involved in it were Christians, and pained that Bandaranaike was advancing the policies of her slain husband SWRD Banadaraniake which related to  the aggressive “Buddhitisation” of Sri Lanka. But the attempt was exposed and neutralised.

During the Civil War, the Christians settled down on the respective side of the ethnic divide. While the Sinhalese Christians tried to prove their Sinhalese credentials, the Tamil Christians were active in the LTTE. Young women from Tamil Christian families were the first to volunteer for LTTE’s woman brigade. This was because they were comparatively free from the conservatism of Hindu families. The Muslims, though they were Tamil-speaking, did not join the LTTE. They eventually came to be at the receiving end of the LTTE’s policies. In the Kattankudy mosque massacre, 147 Muslim men and boys were killed on August 3, 1990, by the LTTE.

The Muslims, though Tamil-speaking, did not consider themselves as part of  the Tamil nation. Way back in 1885, a debate arose when Sir Ponnambalam Ramanathan (1851-1930), in a speech to the Ceylon Legislative Council, had tried to prove that Tamil Muslims were descendants of low-class Tamil Hindus, who had converted to Islam. The Muslim community (then called Moors in Ceylon) was enraged and argued that they were descendants of Arab traders, who settled down in the island centuries ago and gradually adopted Tamil while forgetting Arabic.

Muslim assertiveness is not new in Sri Lanka. Way back in 1915, there were Candy riots between Sinhalese (Buddhists) and Muslims. Last year in March 2018, there were similar clashes between Sinhalese and Muslims. Religious places of each community were attacked by the other. But this is the first time in historical memory that Muslims have turned against the Christians. The provocation seems to be imported rather than indigenous. The terror attacks rather seem to be part of the global jihad or more particularly, retaliation for Christchurch mosque attack on March 15. In recent years, missionary activities by Christians and Muslims are on the rise in the island. These terror attacks, though a grave security risk, might not indicate any shift in the politics of Sri Lanka. But it is a signal that Jihad bi-al Qital has appeared on the shores of the palm-fringed island.

(The writer is an independent researcher. The views expressed herein are his personal)