In a state of turmoil

In a state of turmoil 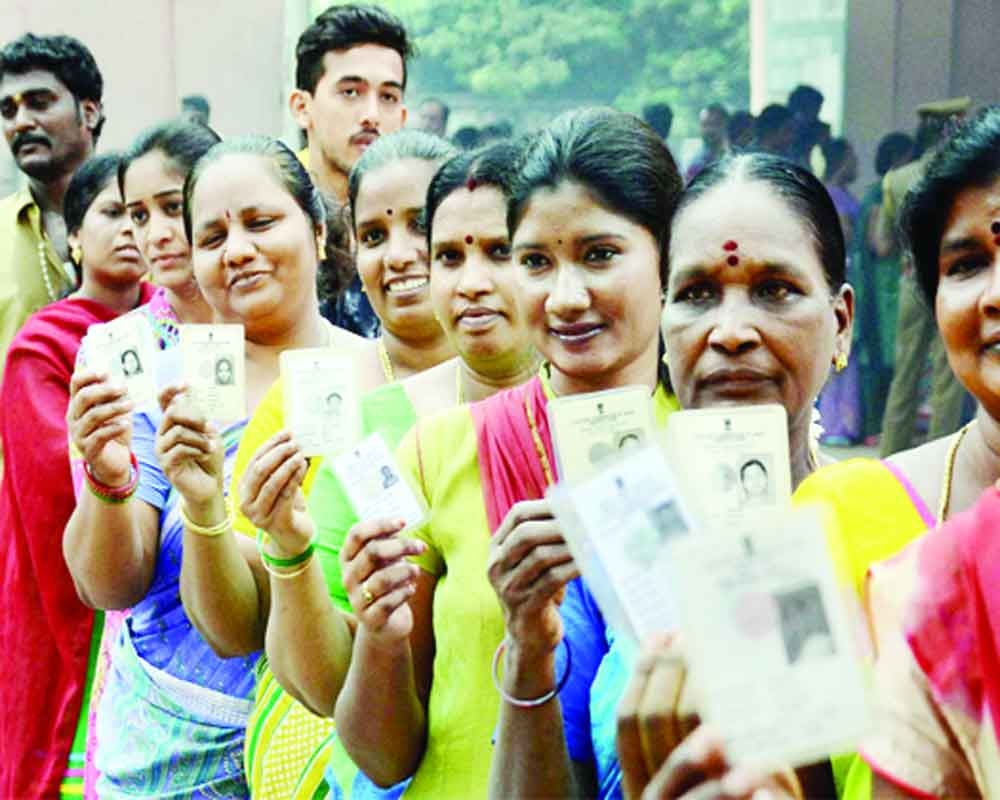 Tamil Nadu is at the crossroads today as the political leadership has become power-hungry and is least concerned about the State’s welfare. There’s none who can show the way

The second phase of the Lok Sabha election took place in Tamil Nadu on April 18. In my earlier articles focussing on Tamil Nadu, I had mentioned that the Dravidian State is in need of a leader who can inspire the Tamils and create a feeling in them that they, too, are part of the sub-continent, enjoying the same cultural and historical heritage of the vast landscape that is India. However, the month-long election campaign in the State could not throw up any candidate of that calibre. More than that, what is disturbing is that leaders of most regional parties want the population to remain sub-literate and ignorant about their rich past. Regional parties like the All India Anna Dravida Munnetra Kazhagam (AIADMK), the Dravida Munnetra Kazhagam (DMK), the Pattali Makkal Katchi (PMK), the Marumalarchi Dravida Munnetra Kazhagam (MDMK) and the Desiya Murpokku Dravida Kazhagam (DMDK) want the abolition of the National Eligibility cum Entrance Test (NEET), the proposed common admission test to engineering colleges.

The demand for the abolition of NEET is being made with ulterior motives because the regional parties stand to gain by reverting to the old style of admission. The quality of medical doctors churned out from the medical colleges in Tamil Nadu is far below than that of the national average. Before the advent of NEET, admissions to medical colleges in the State were based on the marks scored by the students in the Class XII board examination. Students  scoring 90 to 98 per cent in the examinations being held by the Tamil Nadu Government was a routine affair. Quality of the plus two courses in Government-run schools was abysmally low compared to Central schools as well as other national board syllabi. Money played a big role in admission to the medical colleges in the State. With the introduction of the NEET, the managements (mainly political leaders belonging to the DMK, AIADMK and other regional parties) lost a source of income and, hence, the opposition. How many States in the country are opposed to the NEET and how many are worried about the loss of federalism because of this all-India common entrance test?

The country’s top medical doctors and teachers were aghast over the intransigent attitude of politicians in Tamil Nadu. MK Stalin, leader of the DMK, claimed that there is convergence of thoughts in the manifestoes of his party and that of the Congress’. The DMK’s priority is to get the NEET abolished while it was the Congress-led UPA regime which introduced it. Well, the Congress will go to any extent to regain the power which it surrendered to the BJP in 2014.

Last year a girl, Anita, who had set dreams of becoming a medical doctor committed suicide. Though she had scored reasonably good marks in the qualifying examination, she failed in NEET, which forced her to resort to the extreme measure. Nobody has asked the politicians in Tamil Nadu why they are not raising the standard of the syllabus in the State. The BJP has done a good thing by telling the AIADMK that NEET is here to stay.

Some of the demands being made by Dravidian politicians in the State will make one wonder whether Tamil Nadu considers itself worthy of special status in a loose federal structure of the Indian Union. Tamil Nadu has always rejected centrist impositions, equating them with a hegemonic hold of North India in the life of its people. It is the lone State in India which does not have even a Navodaya Vidyalaya, a concept school system introduced by Rajiv Gandhi during his tenure as Prime Minister (1985-1991).

Rajiv Gandhi wanted the rural poor in the country to get state-of-the-art modern education with the ambience of public schools. That was how Jawahar Navodaya Vidyalaya was launched. All districts in the country were allocated a Navodaya Vidyalaya  which offered free education, boarding and lodging. But the rural and urban poor of Tamil Nadu are denied this facility because of the obsession of Dravidian parties. They are opposed to Navodaya Vidyalayas because they shun Hindi and Sanskrit. Please note that not a single student  from such schools had taken recourse to the extreme step for failing in any entrance examination. Tamil Nadu is the only State in the country where Hindi is not taught in Government-run schools.

The opposition and resistance to Hindi and Sanskrit by Dravidian politicians is an attempt to hasten the process of secession from India. The DMK keeps on declaring that the attempt to “impose” Hindi on non-Hindi speaking States is part of the saffronisation drive. Though scientific research has established that there never was any Dravidian in the sub-continent, the DMK and the AIADMK still swear by the Aryan-Dravidian divide. If they accept the fallacy behind the Dravidian theory, their raison d’être itself would be questioned. The Dravidian parties could be hauled to the court over charges of denying the students their right to education. Another secret ploy behind this resistance to Hindi and Sanskrit is the design of the DMK and the AIADMK to create a notion among the Tamils that they are not part of this great country.

Did you know that some of the best defence training establishments in the country are in Tamil Nadu? There are the Officers’ Training Academy at Chennai which grooms young graduates to take up professions in the elite Indian Army, the Air Force Flight Instructors’ School at Tambaram that trains flight instructors, who teach fighter pilots and the Defence Services Staff College, Wellington, Nilgiris, a centre where senior commanders of the defence forces are moulded.

Soldiers not only from India but even from friendly countries are trained at these establishments which have played a significant role in creating a strong bond between officers of Indian defence forces and those of other countries. You may be shocked to learn that officer trainees from Sri Lanka are not allowed in these institutions because of opposition from Dravidian politicians like MK Stalin, Vaiko, Thol Thirumavalavan and the Leftists. The ethnic crisis in Sri Lanka and the civil war demanding a separate Eelam are the reasons behind the Sinhala officers becoming persona non grata in Tamil Nadu. Political parties, which could not stand on their own feet, force the national parties to follow a foreign policy to suit their convenience. This is nothing but compromising on national security and India’s ties with friendly countries. Why should a handful of narrow-minded people dictate the foreign policy of India?

As we get ready to face the 2019 Lok Sabha election from Tamil Nadu, the truth remains that there is not a single leader in the State who has a national outlook and the image of a statesman. The present lot of leaders are at best a group of greedy politicians, fighting openly for the fruits of power. Unfortunately, the Congress is  weak-kneed when it comes face-to-face with the DMK. Local Congress leaders, who can best be described as subservient to 10, Janpath, have become the B-team of the DMK in Tamil Nadu. The BJP leaders are also a big disappointment as they failed in countering the anti-Modi campaign by the Dravidian-dominated media or stand up to the likes of Stalin and Vaiko.

Questions were asked about the possibility of Kamal Haasan emerging as an alternative rallying point. But then for all his grandiloquent statements of change and Gandhi, he fought shy of a contest. Who will save Tamil Nadu from this predicament? Sadly, there is nobody on the horizon.

(The writer is Special Correspondent, The Pioneer)