Injustice of a mindset

Injustice of a mindset 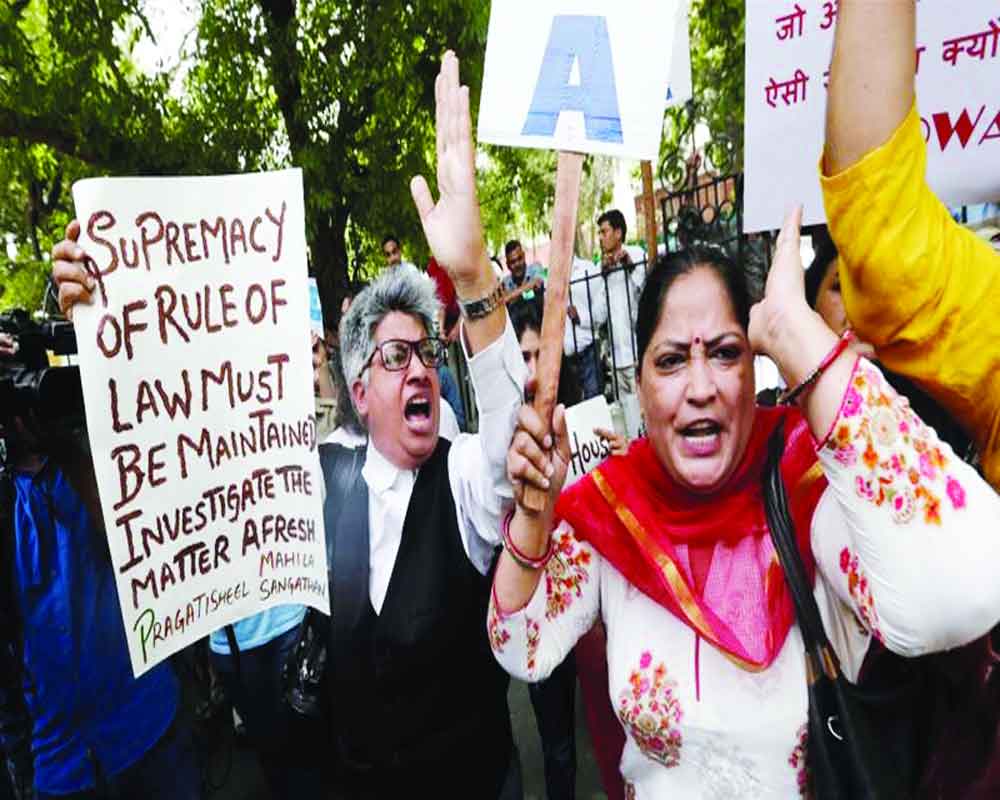 Individually, men may be endearing in their wisdom of welcoming diversity. But collectively, there’s a beehive thinking that’s seared deep enough and always doubts otherness

In many ways, the Supreme Court probe panel’s summary dismissal of the sexual harassment charges against the Chief Justice of India (CJI) Ranjan Gogoi is but a natural corollary of the presumptuous sexist attitude towards working women in this country. A mindset that sees them as encroachers in a so far restricted space and, by virtue of laying claim to that space, considers them liberated and bold enough to bend all kinds of rules and worse, use feminine guile as a negotiation tool. Individually, the men may be endearing in their wisdom of welcoming diversity, even making a point in doing so. But collectively, there’s a beehive thinking that’s seared deep enough and always doubts this otherness. Worse sees it as a threat. And that’s sad.

A dipstick survey among men at any workplace shows a majority assigning some portion of the blame of sexual harassment to the woman herself, often concluding that such charges are nothing but the age-old honey trap ploy or cry wolf syndrome to get what she wants. Some even assume that these are extra-territorial relations gone wrong. Rarely would they agree that the predatory attack comes from powerful men, who by virtue of their longer reign in authority, or age, try to use the manipulative and primal hunter-tame strategy. It is almost as if men in power are pre-ordained to be morally invincible and not capable of human frailty or monstrosity. Unless tempted or trapped. Nobody looks at it as either opportunistic or situational from their end. And if they have a profitable career graph, that worth far outweighs a lone woman’s dignity.

It may sound incredulous but no matter how many capable women have proven their mettle, how many have broken the glass barrier or how many have brought their unique skill sets and multi-tasking abilities to dynamic management, myths about a woman’s role and place in society are embedded far deeper in our cultural DNA. And a woman in a leadership role is either perceived as circumscribed by able male advisors (remember former Prime Minister Indira Gandhi’s coterie) or almost a man herself (remember UK Prime Minister Margaret Thatcher). Working women are subjected to unending innuendos and suppositions and cannot get clemency from this mental stranglehold. So much so that some women play by the rules of the game and even overturn them to suit their trajectory. That’s there, too, as a collateral damage of this uncodified warfare at the workplace.

That is why the day the allegations against CJI Gogoi surfaced, there was a ready acceptance of his argument that it was a conspiracy to “deactivate” his post on the eve of crucial verdicts and an attack on the institution of the judiciary. In a case saddled with inequities — a rank junior court employee who cannot take on the topmost office-bearer as no legal framework applies to him except impeachment — the complainant has already been pre-judged regardless of her courage to challenge a systemic shrine rather than an individual. And a litany of her past legal cases was bandied about for every claim that she made about being punished and intimidated for daring to stand up. Then the questions kept floating around: Why did she take so much time to report this alleged misbehaviour? Why did she release statements? What’s the price of vilifying a CJI? Will she be decimated in an out-of-court settlement? Why had not other women staffers seen this coming? Why should an educated woman like her feel frightened and vulnerable if she is so empowered? Our line of questioning  has no empathy but only discredits the victim’s account and shows how we are hardwired to dismiss the allegations rather than probe them. As a society we are yet to buy into the idea — in this case as in the others — that a woman might be traumatised, threatened, ashamed and even outwitted by hostile circumstance. What is often disregarded is her first coming to terms with the violation, getting over self-loathing and then taking the fight to the errant. That reconciliation doesn’t often happen overnight. Especially when the offender almost always happens to be familiar and legalities demand specifics as to when and how the line was crossed in intimate encounters. Then there is the larger threat of her economic sustenance, the loss of job as a hitback strategy by the male superior on something as whimsical as non-performance or wrongdoing.

Undoubtedly, there is legal redress in the form of the Sexual Harassment of Women at Workplace (Prevention, Prohibition and Redressal) Act, 2013, but even the prosecution process needs to be free from biases that are shaped by the common worldview. Any inquiry process that does not make the victim feel safe and sure is inherently flawed and not neutral. We may not realise but a formulaic who-where-what-why format and an accusatory tone seem to discredit the victim’s account and automatically prepare the ground for the rejection of allegations. Particularly in a set-up where both the accused and complainant have been close and are not strangers. What needs to be looked into is if the charges are verifiable, whether there is corroborative evidence and the complainant’s willingness to subject herself to a thorough probe. The complainant in the CJI case just wanted to do that, knowing full well that he couldn’t be subjected to existing legal structures. All she wanted was a level-playing field in the inquiry process with the presence of her lawyer, a neutral, apolitical observer and a right to a shared, not one-sided, proceedings. It would be silly to assume that a woman would stake her entire reputation and career path to pursue a case legally, at the cost of her limited resources, only to wangle an out-of-court deal that could have been done informally anyway. It is because there are stereotypes that any inquiry process needs to be above board, honouring the intended spirit of the law. Even around the world as here, any sexual harassment case automatically implies that the complainant is assigned an advocate trained in sexual assault cases, who may in turn lead her to more support services. An audio visual recording is also desirable even if not mandated. The most significant oddity about sexual harassment cases is that unlike other investigations, the focus is not on the offender but the accuser, as if she is the one whom motives can be ascribed to. The victim’s inconsistency or vulnerability always makes news, not the offender’s transgressions. If we want true justice, be it nailing the accused or exposing the fakery of the complainant, any judgement has to be based on thorough investigations and procedural propriety rather than latent bias. The last is easy to give in to. But then that is not law. That is what young women lawyers are saying in their silent campaign of sending snail mail letters to Supreme Court judges from across the country with printouts of the Sexual Harassment Act.

And in their appeal on social media, they have pointed to this very mindset of assumption:  “Independence of the judiciary was never envisaged to mean a complete lack of accountability and existence above the law. For an institution, which is meant to be the saviour of the rights of all citizens and the final interpreter of the Constitution, the judges of the Supreme Court of India have for far too long gotten away with impunity from charges of sexual harassment levelled against them.”