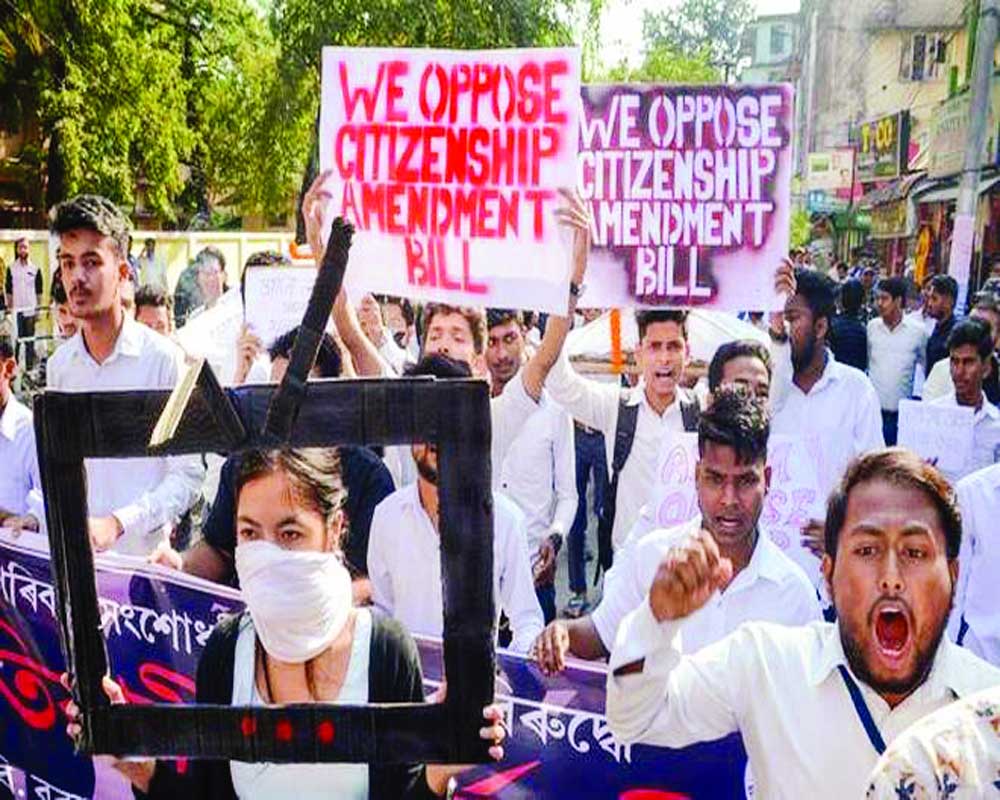 By distinguishing immigrants on the basis of religion, the Citizenship Bill goes against the spirit of our Constitution

From the looks of it, the resurrected Citizenship (Amendment) Bill, which died in the Rajya Sabha last session because of a lack of numbers and consensus, is a polarising tool meant for the Bengal elections and intimidating Muslims. For it completely keeps the Northeastern States, which equally share the border with Bangladesh, out of its purview, saying most of them have Inner Line Permits and special status that guard them against an influx of “outsiders” (Hindu immigrants in this case) and, therefore, need not be anxious about a law that would apply for the rest of the country. Opposition to the Bill stems from the fact that it reinforces ethnic and communal faultlines due to its overt and covert support to selective migrants escaping persecution in the neighbourhood. While it proposes to grant Indian citizenship to fleeing Hindus, Sikhs, Buddhists, Jains, Christians and Parsis, who are residents of Pakistan, Afghanistan and Bangladesh, it excludes persecuted Muslim sects, the Shias and Ahmadiyas. In other words, non-Muslim immigrants would not face deportation and Muslims would. It also proposes to reduce the mandated 11 years of residence in India for citizenship eligibility to six years, hastening cooption. By distinguishing settlers on the basis of religion — that too pitting Muslims versus non-Muslims — the isolationist Bill goes against the fundamental right to equality under Article 14 of the Constitution. Ostensibly, the BJP wants to neutralise the Muslim infiltration in border States, encouraged by votebank politics of past years, with a Hindu influx and effect a demographic change. But this idea is preposterous, simply because there aren’t enough Hindus left in these countries who would want to return to their roots. The population of Hindus in Bangladesh at the time of Partition was close to 30 per cent and is currently estimated to be less than five per cent. The Hindu population in Pakistan was 23 per cent at the time of Independence and is currently about one per cent. Afghanistan’s Hindu population declined since 1992 from a quarter million to less than 220 families. As of 2017, no more than a few thousand Hindus and Sikhs were left in Afghanistan. The less said about the other minorities the better. So, illegal Muslim infiltration from Bangladesh is the only concern because of porous borders and needs to be monitored. Pakistan does push militants into Kashmir but migrants are hardly a problem in the northwestern part of the country. Clearly, the Bill has been envisioned with Bangladesh as its focus.

Also, now that Assam, Arunachal, Mizoram, Tripura, Meghalaya and Nagaland have been kept out of the Bill’s purview, it is clear that the BJP’s target is undoing Muslim immigration into Bengal. It has now stepped back from the Northeast simply because it is investing too much in the region in developing a new votebank and strengthening its footprint. Massive protests have already taken place in the Northeast, especially in Assam, where ethnic groups have raised concerns about the burden of “illegal migrants” being passed on to their State alone and it being contradictory to the spirit of the Assam Accord and the just-released National Register of Citizens (NRC) list. The Assamese argue that the Bill granting citizenship to Hindu refugees from across the border till the cutoff year of 2014 would swamp Ahom identity and the right of indigenous people over their land, opportunities and resources. The Conrad Sangma-led Meghalaya Democratic Alliance (MDA), where BJP is a coalition partner, had earlier sought an immediate review while the Mizos feared a massive influx by Buddhist Chakmas. The indigenous people, be it the Assamese, Khasis or the Nagas, argue that the Northeastern States are yet to recover from the influx of Hindu Bengalis from 1971 and, of course, the subsequent illegal Muslim immigrants. They equate all refugees to the drought of economic opportunities for locals and are deeply distrustful of any migration policy. So now that these States are out of the Bill, it effectively applies only to Bengal. Combined with NRC, which is intended to review the status of naturalised settlers, the Bill clearly seeks to loosen up the Muslim votebank in Bengal, which has almost a monolithic loyalty to the Trinamool Congress. The BJP might use the Hindu refugees like the Congress did the Muslim ones but both encourage alienation of locals rather than integration. What everybody seems to forget is that for all our professed secularism, we are carrying the ghosts of Partition. That explains why communalisation is an easy gamble. We cannot afford to derail the peace by stoking such sentiments.