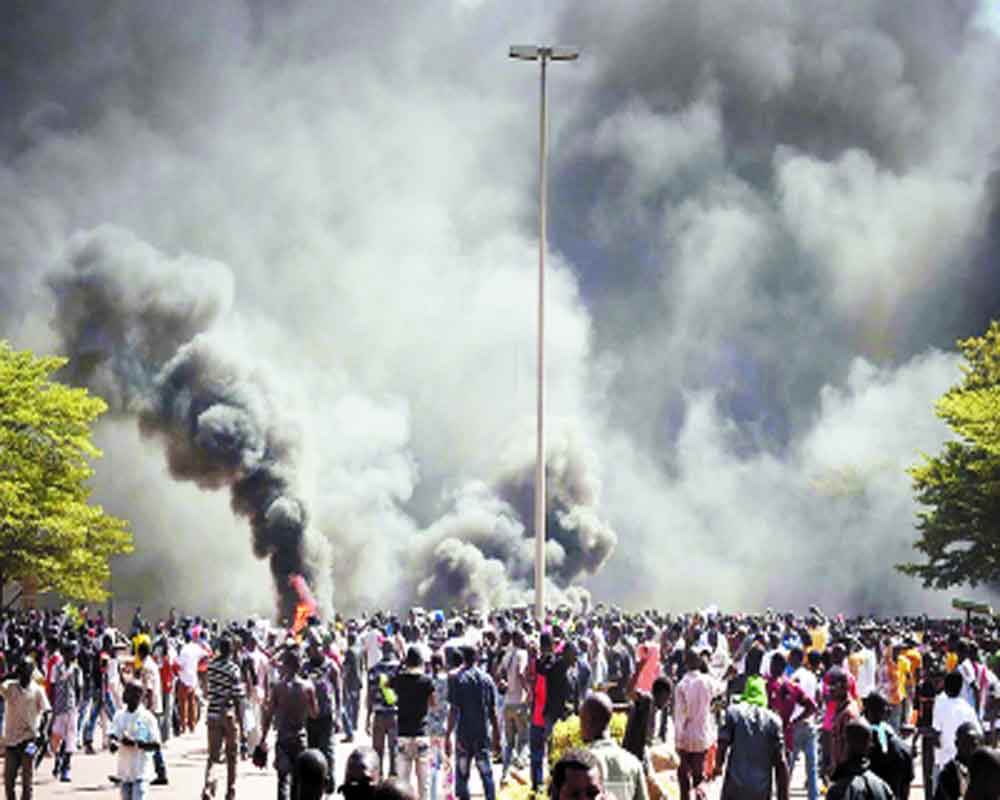 Islamist jehad is not dead. It is only retreating from Syria and Iraq for the time being. In disguise, remnants of al-Qaeda, ISIS and their local variants are appearing across the world. Recently, ISIS massacred hundreds of Christians in Sri Lanka to show their resurrection

Islamist terror in the Sahel is not a new phenomenon. It has been gaining ground for long. While fighting major wars in West Asia, Afghanistan and Syria — catalysed by democratic deficit and fast decline of liberal world order — the Western powers have hardly paid serious attention to the Sahel terror. Today, for many of the global powers, jehad in this part of Africa is “a forgotten war”. Despite an onslaught of deadly attacks coming from a matrix of Islamist radicals, the regional Governments are either not been able to counter them or at times not willing to nip the terrorist organisations in the bud.

The Sahel, a vast sub-Saharn scrubland, has witnessed the emergence of a number of jehadi groups over the years. By early 2007, a local Salafist group in Algeria was branded as al-Qaeda in the Islamic Maghreb (AQIM). Gradually, AQIM has become the centre of various disruptive activities across the region. Afterwards, some other terrorist groups emerged in the Sahel, such as Mokhtar Belmokhtar’s Katibat (battalion) al-Murabitun (Those who remain steadfast), the Movement for Unity and Jehad in West Africa (MUJAO), Boko Haram and its breakaway faction, Ansaru. So far it has been observed that all these groups have their own strategies and dynamics, but they have maintained communications with each other. Further, in all of them, as they are increasingly posing threat to Western interests, two typologies demand attention at the moment: borderless criminals kidnapping for ransom, and highly politically motivated terrorism. In fact, following the coup d’etat in Mali in 2012, the Sahel has come at the forefront of the US foreign policy.

Some of the security and intelligence experts opine that as the Islamist militants are fast losing their hold in Iraq, Syria and Afghanistan, they may look for new operational grounds with local designs. After the conduct of French military’s Operation Serval from January 11, 2013 to July 15, 2014, three of the five Islamist leaders —Abdelhamid Abou Zeid, Abdel Karim and Omar Ould Hamaha — were killed. Unfortunately, Mokhtar Belmokhtar fled to Libya and Iyad Ag Ghali left for Algeria. The French mission was largely successful in pushing the jehadis out of the main centres.

Today, what is happening on the ground is that the US, the UK and France, along with other Western countries, are trying to assist the local forces, both in the form of offering training in advanced warfare and financial aid to fight the growing menace of Islamist jehad in almost 16 African nations. But to date, these efforts are hardly bringing any result.

Besides, ordering for troop withdrawal from Syria and Afghanistan, the American military is cutting back its forces in Africa by 25 per cent in its western front. Around the same time, the jehadis are mounting their attacks on Northern Burkina Faso and moving towards South along the border with Niger. It is disheartening to note that new jehadi elements are fast spreading to areas such as Ivory Coast, Ghana, Togo and Benin.

Amid the gloom and a complete U-turn in the US global strategies and priorities under the Trump Administration, initiatives like “Flintlock” were carried out in Burkina Faso in February. The counterterrorism exercise drew 2,000 military personnel from more than 30 African and Western countries. This kind of vigil and counter terror steps might be helpful, but a sustained strategy is on high demand to secure this impoverished region from the grip of Islamist terror. The US is only providing air power or at most intelligence assistance to its European and African allies in the name of the so-called global war on terror (GWOT).

On record, this year so far America has conducted 24 air strikes against al Shabab in Somalia, compared to 47 such operations in 2018. At the moment, only 6,000 US troops and 1,000 Defence experts work throughout Africa. Their primary task is to impart training and conduct exercises with local Government forces. Under Trump, no one knows who are America’s allies and who are friends. Nothing seems stable for Trump, including his own presidency. He is only creating chaos and bringing the whole liberal institutions into limbo.

France, the erstwhile colonial power in West Africa, is today maintaining 4,500 troops in the area to fight the jehadis in countries such as Mali, Niger and Chad. France very successfully routed al-Qaeda affiliates from the North of Mali in 2013. But is it enough to offer a safety cover to such a vast expanse of land from these disgruntled and in a way dislodged firepower of Islamist jehadis? Absolutely not. It is a growing threat. It is spreading fast beyond Sahel region.

Islamist jehad is not dead. It is only retreating from Syria and Iraq for the time being. In disguise, remnants of al-Qaeda, ISIS and their local variants are appearing across the world. Recently, when local offshoots of the ISIS massacred hundreds of Christians in Sri Lanka in April, the reclusive caliph of the ISIS, Abu Bakr al-Baghdadi (believed to be dead), issued his first video message in five years showering praise on his followers in Africa.

He said, “Your brothers in Burkina Faso and Mali…We congratulate them for their joining the convoy of the Caliphate”, as reported by the SITE intelligence group that monitors communication networks of the jehadi organisations. This shows how the ISIS in West Asia is connecting to their followers in Africa and considering the continent as a fertile ground for future course of action.

The jehadis in Africa have mainly been fighting their own Governments, but generally they are averse to westerners coming to their lands. Some like Boko Haram in Nigeria, which is known as the Islamic State in West Africa, is by principle completely against Western learning and it is virtually creating chaos in that country. Whereas the groups such as the al-Shabab in Somalia is deep into the teachings of the al-Qaeda and it is mostly targeting major population centres in the capital city of Mogadishu.

This is how a strong tendency of establishing a proto-Caliphate is spreading in some parts of Africa.

To conclude, imparting training to local Government forces and eliminating regional jehadis may not harbinger peace and stability to these poor African nations. What comes worse is that some of the Governments are giving a free hand to the local ethnic militias to fight the jehadis. Instead these groups are turning on the locals and their own enemies and becoming a big threat to peace and stability.

At this hour, Bob Dylan’s prophetic words must serve as the sole guideline to the Western nations while countering Islamist terror in this part of the world. He wrote in 1963, “Come you masters of war. You build all the guns. You build the death planes. You build all the bombs. You hide behind walls. You hide behind desks. I just want you to know I can see through your masks. You never done nothing. But build to destroy. You play with my world.”

Most of the African nations are fighting the worst of the evils that were simply left behind either by their former colonial masters or the misguided policies and programmes designed by leading global powers in the name of GWOT. And what adds fuel to fire is long lasting misrule, corruption and mayhem brought by many of the African leaders and their ilk. Hence, the jehadis, ethnic militias and local goons are constantly gaining ground both to exploit rich reservoirs of resources and inflict torture on the common citizenry. To put this chaos to an end or to minimise it, the local governance system must fight the evils first, instead of blaming former colonial powers and top global players operating in the Sahel region.

To bring peace, stability and development back, it is time for the Sahelians to think glocally. They must propel good governors as almost no governance is the root of all their evils.