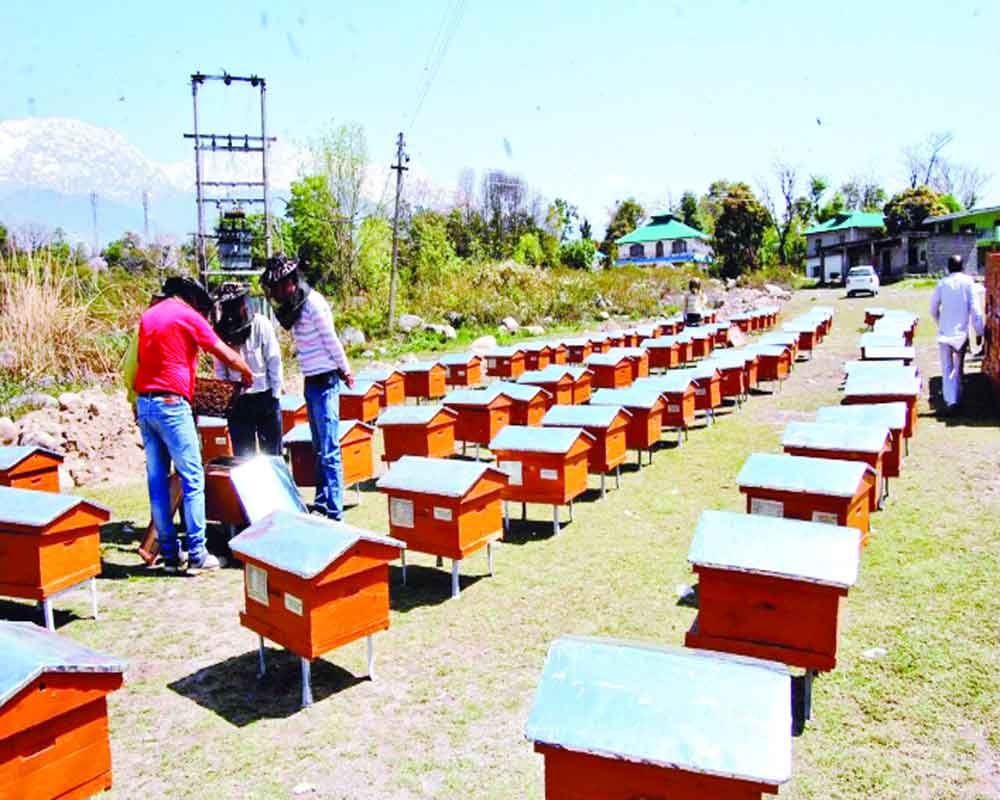 The model of development undertaken by KVIC, the Indian Army and the LAHDC in Jammu & Kashmir must be replicated all across the State to mainstream misguided youth.

Idle minds, as they say, are the “devil’s workshop.” The size of Jammu and Kashmir’s unemployed youth is almost that of the population of say Austria, Bulgaria or a small-sized European nation. Unfortunately, due to the lack of proper guidance and avenues, clubbed with administrative ennui of successive unstable Governments over the years, a majority of the youth here are directionless, frustrated, idle, gullible and disillusioned.

So, what next? To win back their hearts, we need no rhetoric, empty promises or utopian dreams. Instead, constructive action, backed by strong believable initiatives that are engaging, doable and can be replicated are the need of the hour. In the last financial year (2018-19), be it the distribution of 2,330 bee boxes under the “Honey Mission” at Kupwara or the training-cum-distribution of electric potter wheels among potters in villages such as Likir, Saspole, Sakti or Matho in Leh that records minus 18 degree Celsius, the Khadi and Village Industries Commission (KVIC), with a deep interest to connect rural areas and a nationalist vision, has emerged as a catalyst and game-changer to bring this most crucial and critical resource  back to the mainstream.

In the process, it has  become an equal partner in improving the socio-economic status of the people here. The first was done in collaboration with the Indian Army’s Sahyog programme and the second with help from the Ladakh Autonomous Hill Development Council (LAHDC). In fact, KVIC and the Army had worked out a unique model for Jammu and Kashmir: To provide means of sustainable development and keep the youth progressive and dedicated. Let us not forget that 70 per cent of the population in Jammu and Kashmir is under 31 years of age. Yet, unemployment rate is very high.

Towseefa Rizwi, a woman entrepreneur in Shalhar village of Bandipora district in north Kashmir, compared herself with the women working in the Government sector and found one big difference: “I am independent.” Rizwi is the owner of Kashmir Valley AgroIndustry (KVAI) where her husband Parvez works as production manager. She mainly deals in honey, which she processes and packages at her own plant in the village. “I always had the desire of starting my own business. And I am thankful to honey bees for making me realise my dream,” said Rizwi.

For Zamrooda Khan, a woman entrepreneur in downtown Srinagar, beating the greatest challenges of life would not have been easy if her bees had not kept her busy. Miseries and melancholic moments in her life have failed to shake her resolve for living a dignified life. Khan has not only fought a battle against breast cancer after her divorce but has also turned herself into a small entrepreneur. “This job suited me, for it kept me busy and that too with nature’s gifted beings called honey bees,” said she.

While the State boasts a huge potential in terms of generating electricity from water resources, exports in horticulture, floriculture and apiculture, there are other unexplored areas like adventure and culinary tourism that have immense potential for promoting entrepreneurship. Since obtaining land and licences has always been a tedious task, a number of youth in the Valley have been running cafes, art galleries, co-working spaces and  design studios among others. While it is important that the Government promotes conventional employment techniques through public sector jobs and skill development, it is also essential to give a push to youth initiatives which have a greater message to send to the entire community.

Demonstrative, result-oriented and sustainable economic and skill set-improving initiatives like the hand-made paper conversion training by KVIC ignites not only the entrepreneurial spark but also instills a high-level of “can do” motivation, which is paramount for the State’s liberation from apathy, disenchantment and the constant fear of a self-created discrimination syndrome. A team of 30 aspiring students had recently visited the KVIC’s Kumarappa National Handmade Paper Institute (KNHPI) in Jaipur to learn the art of hand-made paper manufacturing so that these future entrepreneurs can explore their career in this industry with some innovative applications.

These students were selected under the entrepreneurship development programme of the Army. If these impressionable young minds are

directed positively and are made to believe their contribution to environmental and societal impact, the goodwill and the consequent motivational quotient will be huge.

The KVIC seems to have found the means to channelise these young energetic minds through education and economic development so as to ensure their general well-being. After all, entrepreneurship schemes, that are visible in other parts of India, need to be brought to Kashmir as well. Since the Indian Army and the KVIC have started the process of skill development of youths in Kupwara for paper-making and developing a healthy mind, similar models can draw back frustrated young people from falling easy prey to terror networks.

Youths from the Valley, too, appear much more decisive about their career path now: Say good-bye to terrorism that breaks the nation and adapt skills that make the nation.

Sample these figures from the financial year 2018-19: Being the nodal agency of the ambitious Prime Minister Employment Generation Programme (PMEGP), the KVIC not only utilised the funds of Rs 151.94 crore against a target of Rs 47.45 crore, ie more than 320 per cent of the estimated goal, but also created 48,620 new jobs.

In the Khadi sector, in 2018-19, the KVIC not only registered a production of Rs 52.98 crore and sale of Rs 60.10 crore, which are more than 100 per cent of the targets, but also created 15,257 new jobs. The KVIC added four new institutions too, subsequently creating additional jobs.

Self-belief, a sense of empowerment and positive energy thus created can be replicated across the State.  It is the entrepreneurial azadi and stakeholdership that can pull back the State from the edge of precipice.

If the above results are any indication, the developmental model adapted by the KVIC — in association with the Indian Army or the LAHDC — can be a real game-changer to bring back the erstwhile glory of the Valley.

Remember, if we provide jobs to the youths of Jammu & Kashmir, they will have no time to get radicalised. Hope is the best mantra to make a good start and the KVIC, the Indian Army and LAHDC seem to have already made a good one. If the efforts put by them are followed up by all Governmental and non-governmental agencies, along with their hard work, nuanced research and above all engagement of more and more youths, this model of sustainable development can become a game-changer in making the Kashmir Valley a paradise as declared by a 17th Century Mughal emperor. It is high time for all stakeholders to become part of this quest.

(The writer is Chairman, Khadi and village Industries Commission)