Justice for Rohingyas: Will it come ever?

Justice for Rohingyas: Will it come ever? 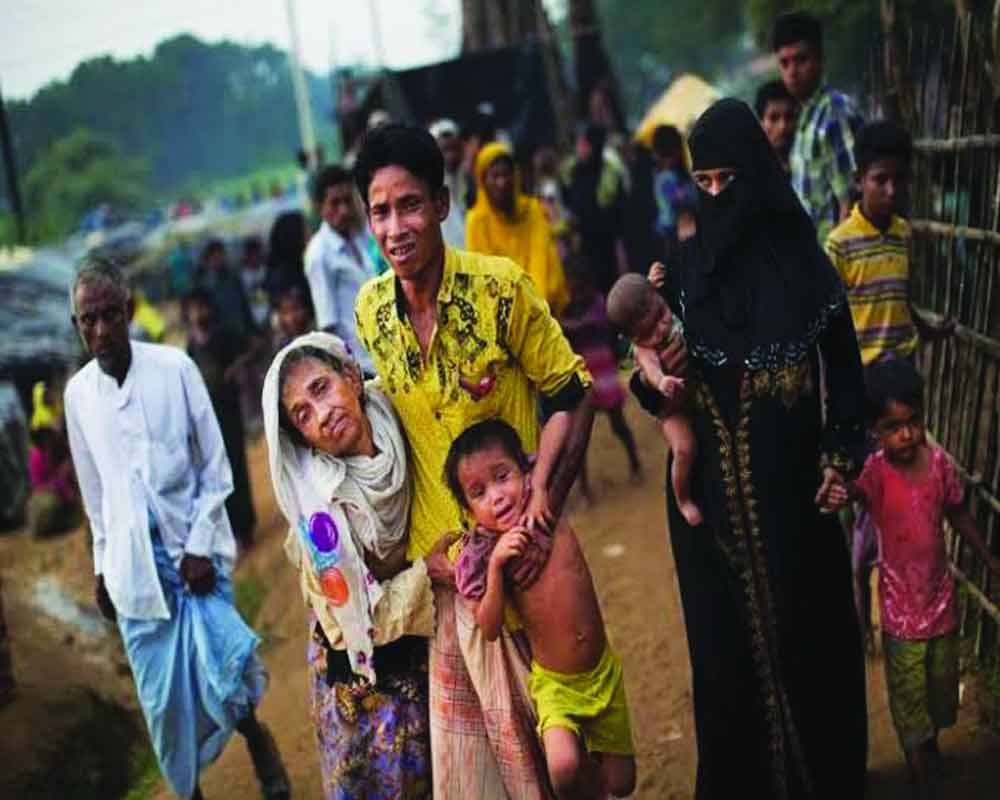 It is now clear that the ordeal of the Rohingyas may continue. They may languish in squalid Bangladeshi refugee camps for some more years, and maybe permanently. The ICJ may not be able to send them back home. It all depends on Suu Kyi’s political stand

The Rohingyas of Myanmar are recorded as one of the most persecuted communities in the world. Though they have been living in Myanmar's Rakhine province for decades, they have been continuously  singled out as foreigners or outsiders by the State. That's not enough, a systematic state-sponsored violent campaign was launched against them in 2017; some call it "genocide”, others term it as “ethnic cleansing”.

Nearly seven lakh of them have crossed over to neighbouring Bangladesh with a hope to escape from torture, rape and horrendous killings. Today they are no less a “No lands men”; they are facing survival threat even as refugees in Bangladesh. It is really intriguing to see how the issue of such global magnitude has been handled by the democratic regime of Myanmar led by former Nobel Peace Laureate Aung San Suu Kyi.

Currently, the Rohingya issue has reached the heart of the International Court of Justice (ICJ). And a Suu Kyi-led team has concentrated its defence on two counts: First, those atrocities may have been committed but those did not indicate genocide under international conditions, and second, that Gambia illegitimately lodged a complaint against Myanmar on behalf of the Organization for Islamic Cooperation (OIC). The legal team of Suu Kyi and the Government of Myanmar advocated that it is unheard of for an international organisation or a non-governmental organisation to submit a case to the ICJ by a non-affected country. Further the legal defence team made it clear that many of the OIC’s 57 member nations have not yet ratified the 1948 Genocide Convention. And some of them have miserably failed to safeguard or protect the ethnic or religious minorities in their own backyard or even to guarantee the basic minimum rights and freedoms to them. So in a way, the OIC backing a sensitive motion against Myanmar may not be truly helpful in indicting the Tatmadaw at the ICJ.

On the other hand, both Gambia and Myanmar are signatories to the 1948 Genocide Convention. In this regard, both of them and the rest of the participating nations in the Convention are committed to prevent and punish actions of genocide in war and in peacetime. With the support of the OIC and a team of international lawyers, Gambia has asked the ICJ to implement an injunction to ensure Myanmar immediately “stops atrocities and genocide against Rohingya people”.

And Suu Kyi on her part, on December 13, when she appeared on behalf of the Government of Myanmar strongly defended her country’s military against allegations of genocide. Though the hearing concluded, the declaration of the final verdict may take several years. In her opening statement only, the democracy icon, simply denied “genocidal intent” on the part of the military and outlined the history of the tensions in the Rakhine Province. She promised that civilians and the members of the military who attacked innocent people would be punished, but repeatedly termed the 2017 crackdown as an “internal conflict”. This is what is appeared to the international community as a blatant lie at least on the part of persona of her status.

In fact, in the last June, the pre-trial chamber of the International Criminal Court (ICC) asked the competent authorities of Myanmar to submit written observations, either publicly or confidentially, on these three specific subjects: one, the possibility of the court’s exercise of territorial jurisdiction over the alleged deportation of members of the Rohingya people from Myanmar into Bangladesh; two, the circumstances surrounding the crossing of the border by members of the Rohingya people from Myanmar into Bangladesh and finally, any other matter in connection with the prosecutor’s request that in the opinion of the competent authorities of Myanmar, would assist the chamber in its determination of this request. While saying so, Suu Kyi underlined that in this internal conflict, Myanmar military was responding to attacks by armed local groups such as the Arakan Rohingya Salvation Army (ARSA). Surprisingly, she did not utter the word Rohingya in her 3,379 words speech to describe the minority group. This clearly shows how the political elite of entire Myanmar want to dislodge the Rohingyas of their identity and status within and outside the country. In all official records, the Rohingyas are simply named as Bengalis and even described as Kalars, a slur referring to their darker complexion. This is an attempt directly to deny them the rights and residential status of the Rakhine province. And Suu Kyi has finally done the same at the heart of the ICJ, in front of the whole world.

Officially, the Rohingyas are not regarded as one of the 132 ethnic groups of Myanmar. They are denied citizenship under the infamous 1982 Citizenship Law that effectively renders the entire community homeless in their own ancestral land. But surprisingly, the Rohingyas constitute nearly one million of the total fifty million population in Buddhist majority Myanmar. For them, getting citizenship is a complex system, as they need to prove that they have been living in Myanmar for the last 60 years. It is difficult for them simply because either documentary record is not available or these are not made available to them from the respective offices.

If we look at Tatmadaw and its origin, then one can fathom why a state actor has committed such heinous crimes against lakhs of hapless Rohingya civilians. During World War II, the formation of the Burmese Independence Army (BIA) was announced by Aung San (Suu Kyi’s father) in December 1941 with the support of the Japanese Army. But later when Japanese occupied Burma, they disbanded the BIA and constituted a smaller Burmese Defence Army under the leadership of Aung San. Thus, the formation of the modern Burmese Army lies in Japanese war tactics and the Imperial Army which completely denies the acceptance of the historic Geneva Convention. And precisely, no national armed forces have so long involved in fighting unremitting combat missions the way the Tatmadaw has been doing. And for Myanmar Army, these wars were against the country’s domestic guerilla groups wherein the lines between the combatants and the rebels were almost blurred. Unfortunately, just after the independence in 1948, the Army was fully engaged in fighting counterinsurgency operations against the ethnic and communist militias in the heartlands of central Myanmar. From the 1970s onwards, the same Army was fully dedicated to preserve the centralised military regime at Yangoon, then capital of Burma from the constant threats from ethnic militias. These rebels who were mainly from Karen, Shan, Mon, Kachin and Rakhine were either struggling for autonomy or for complete independence from the central military rule of the country. Thus an impoverished army, though modernised, dominated mainly by Bamar majority officers at the highest ranks have always have a grudge against the minorities such as the Rohingyas in the Rakhine province.

Along with this a damning UN Report of 2018 that directly accused the Tatmadaw of carrying out genocide against the Rohingya Muslims. The UN Report said it found conclusive evidence that the actions of the Armed Forces “undoubtedly amounted to the gravest crimes under international law” in Rakhine as well as in Kachin and Shan, States also troubled by ethnic aconflicts for long now. But unfortunately, the team of UN investigators was denied access to Myanmar and they had interviewed some 875 people who had fled the country. The mission found that the military were “killing indiscriminately, gang-raping women, assaulting children and burning entire villages” in the Rakhine, home to the Muslim Rohingya minorities and in Shan and Kachin. Then adding to this conclusive report, the Asia Director of the Human Rights Watch, Brad Adams stated: “The fact-finding mission’s powerful report and clear recommendations demonstrate the obvious need for concrete steps to advance criminal justice for atrocious crimes, instead of more hollow condemnations and expressions of concern.” But then what all these have helped is that finally Myanmar has been dragged to the floor of the ICJ. And once again, officially, Myanmar has refused to accept the truth that its Tatmadaw has committed any genocide or ethnic cleansing, saying that it’s a kind of counter attack from the Army to the armed actions of the ARSA and other such rebels.

For Suu Kyi, she could not so far offer a workable alternative to the Rohingya crisis. Most of her political career has been seriously dwarfed by voluminous domestic compulsions. She is no more an ambitious politician who could turn the tables, but she is forced to act the way events are taking shape back home, largely determined by the Army. Her statesmanship is long lost the way she had to tie up with the Myanmar Army to cling on to power for the sake of offering a democratic alternative to her countrymen. Some critics say that she not only defended her generals at the ICJ, but also strengthened her position in view of the upcoming national election next year November so as to bounce back to power once again. Further it may so happen that she has pleased the Tatmadaw that has always been viewed as a symbol of national unity and territorial integrity back home, thinking this might persuade them to rethink the critical provisions of the 2008 Constitution that bars her from taking over as the President of the country. No one knows the political calculation of Suu Kyi and her National League for Democracy. They, at any cost, don’t want to hurt and disrespect the majority Burmans who virtually hate the Rohingyas.

It is now clear that the ordeal of the Rohingyas has not been over. They may languish in squalid Bangladeshi refugee camps for some more years, and maybe permanently. The ICJ may not be able to send them back home. It all depends on Suu Kyi and most importantly, the Tatmadaw who could only guarantee a safe and peaceful passage to the Rohingyas to the Rakhine Province. Let’s hope that Rohingyas get back their home and hearth soon.