Kashmir is firmly on the global radar

Kashmir is firmly on the global radar 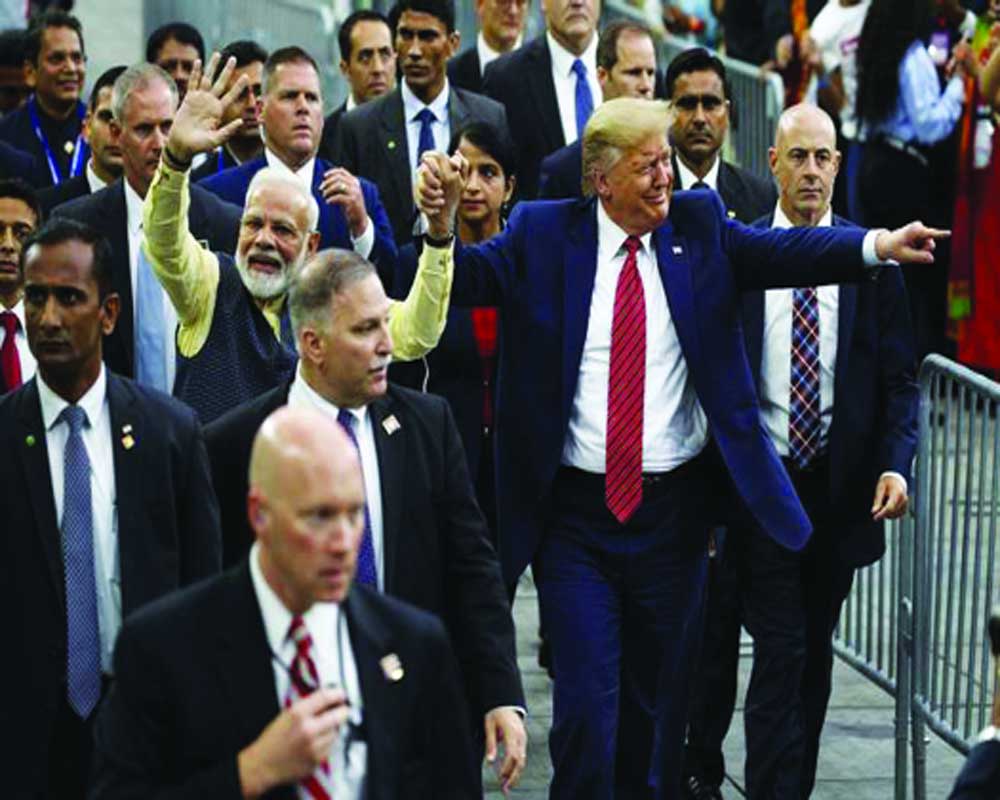 While Modi has risen in the eyes of the Americans after his recent engagements in the US, trade irritants continue to remain. Besides, the Kashmir issue has now been internationalised, whether India likes it or not

No doubt that Prime Minister Narendra Modi’s week-long visit to the US shows the strengthening of ties between India and America. In a packed week of engagements, he participated in both bilateral and multilateral summits, including addressing the United Nations General Assembly (UNGA) and the Climate Action Summit.

What was Modi’s agenda? Before leaving for New York, the Prime Minister said, “Through my participation in UN events, I will showcase our success in realising the Sustainable Development Goals. At the Climate Action Summit on September 23, I will highlight India’s robust action to address climate change in line with global goals and our international commitments. I am confident that my visit would present India as a vibrant land of opportunities, a reliable partner and a global leader and will also help impart new energy to our relations with the US.”

Has Modi succeeded in his agenda?

The “Howdy Modi” event, attended by a 50,000-strong Indian diaspora in Houston, dominated the Prime Minister’s US visit as he wowed the Americans. The show of strength at Houston was meant for their respective domestic audience for both Modi and Trump. Modi utilised this trip for his own image-building exercise as an emerging global leader. The Houston event was a glittering performance that assured the American establishment, business community and the Indian-Americans that Modi was a man of vision.  Modi consolidated his position as a rockstar as Trump compared him to the famous American singer and actor Elvis Presley. Second, both Trump and Modi exhibited their excellent chemistry by praising each other. While Modi said everybody on the planet knew Trump, the latter returned the compliment by calling him the “father of the nation.” Modi even campaigned for Trump by reminding the Indian-Americans “Ab ki baar Trump sarkar.”

Third, the profile of the Indian diaspora also got raised as the 50,000-strong Indian-Americans cheered Modi lustily. They were proud of Modi who was sharing the dais with the American President. He has projected “Brand India,” as an emerging global power through “Brand Modi.”

With a larger objective in mind, the Prime Minister had engaged several leaders from small and big countries on the sidelines of the UN meet, pushing for greater engagements with larger groups of countries. For the first time, Modi held plurilateral top-level interactions with the leaders of the Pacific Island States and leaders of the CARICOM (Caribbean Community and Common Market) group. He attended 40 meetings with various leaders and groups culminating in his address at the UNGA. At the UN Climate Action Summit, Modi outlined India’s environmental and climate action policy, particularly its solar energy and the domestic policy on water and transport.

As for investment, the Prime Minister made a high pitch, inviting major American firms to come and invest in India, promising all facilities in his meeting with their Chief Executive Officers both in Houston and New York. The results of this will be known in the coming months, whether they would put their money in an economy, which is on the slide.

The visit began in Houston with India and the US cementing their energy ties, with India’s State-run Petronet LNG Ltd signing a pact to negotiate the sourcing of around five million tonnes per annum (mtpa) Liquefied Natural Gas (LNG) from US developer Tellurian Inc. While some trade deal was expected in the bilateral meeting with Trump, it did not materialise. Trade deficit is one of the irritants between the two countries as the US President has been demanding more access to Indian markets. The US is India’s largest trade partner and Trump wants New Delhi to eliminate tariffs on information and communication technology products and removal of price caps on medical devices, besides other things. India, on the other hand, wants the US to reinstate the Generalised System of Preferences revoked by Washington three months ago.

On the diplomatic side, Modi led India by explaining the irksome Kashmir issue to global leaders in his meetings with them.  Claiming that things were coming back to normal, he blamed Pakistan for the cross-border terrorism. At the UNGA, Modi made a statesman-like speech while Imran Khan predictably internationalised the Kashmir issue. Modi focussed on India’s role towards development, peace and security, with no mention of Article 370. “Fellas, work it out,” was the advice given by Trump to Modi and the Pakistan Prime Minister. Trump called them his “great friends” and gave a strong push to get the two to talk. While Trump talked of dialogue, his administration talked of human rights and return to normalcy in Kashmir. The international community is still watching Kashmiris. Like it or not, Kashmir has come on the global radar.

While the visit is being touted as successful, trade irritants continue to remain and the Kashmir issue is now internationalised, despite all efforts by New Delhi to downplay it. On the whole, Modi has risen in the eyes of the Americans as this visit has not only strengthened him at home and abroad but also reinforced the view that the Indo-US relationship has become an all-weather partnership.