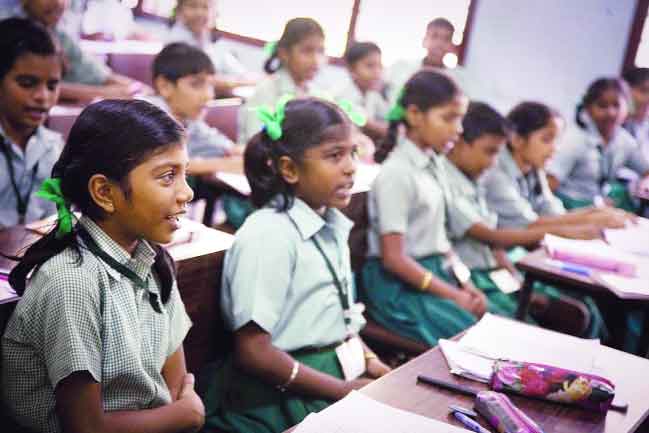 If norms under the RTE Act are scrutinised, most government schools will be de-recognised. Changes in the Act may bring some accountability in the elementary education system

An amendment to the Right to Education Act (RTE-2009) passed earlier by the Lok Sabha in 2018 has also been passed by the Rajya Sabha on January 3, 2019. Under this act, the no-detention policy up to class VIII has been modified. The amended Act leaves it to the State Governments to either continue with it as mandated in the original Act, or ask the schools to conduct examinations at the end of Classes V and VIII, as was practised before the RTE Act. It also stipulates that to avoid failures and detention, if a child is unsuccessful in the Class V exams, he would be given remedial inputs by the school and examined again. Only if one does not succeed the second time, he would not be sent to next higher class, as he may find himself in a more precarious situation than being detained in the same class. The RTE Act was made operational on April 1, 2010, and the nation was assured that its total implementation would be achieved before March 31, 2013. People rarely trust such tall proclamations from the Government’s side, and once again, their apprehensions proved right.

Nothing changed visibly in creating a learning environment in sarkari schools; their downward slide in credibility and public acceptability continued virtually unchecked. Even now if the norms prescribed in the Act are genuinely scrutinised, around 90 per cent of these schools will have to be de-recognised. It speaks volumes of how shabbily the Act was implemented even during the much-hyped three-year deadline for full implementation. It became evident to everyone, even during the first three years of its implementation, that teachers became increasingly indifferent and consequently there was a visible decline in learner attainment at primary and elementary levels.

Such observations came from all sides, the teachers’ accountability vanished rather completely. The district and block level education officers, who were expected to keep some semblance of supervision and monitoring of schools, and exhort teachers to give ‘good’ results, had no such obligation before them as the results were known: All pass and no fail. Children were happy and parents, mostly from weaker sections, could not initially comprehend the implications of their wards getting promoted to higher classes without acquiring the requisite learning. In practical terms, such children were being pushed into the dark alleys of ignorance and helplessness as they were neither in a position to pass Class VIII exams or cope with learning in the secondary stage. All this created considerable disquiet when more and more children began dropping out.

The RTE Act had another interesting stipulation that stated that the year-end examinations would be replaced by the Continuous and Comprehensive Evaluation (CCE), which was to be regularly conducted by the teacher, its outcome analysed and parents were also taken into confidence whenever and wherever found necessary. Further, it was to be utilised to provide remedial teaching to children found deficient in their learner attainments. The idea of CCE is based on sound pedagogical principles. However, its implementation requires certain optimal inputs of infrastructure and professional readiness. As most of the schools were deficient on both of these counts, the implementation of CCE was, right from the beginning, an impossible proposition. CCE requires professionally trained teachers who must work within the framework of a well-thought-out   and accepted teacher-taught ratio. It requires teachers who are competent, committed and willing to perform their duties with devotion, and are not frequently burdened by non-academic tasks.

With over 10 lakh vacant posts of school teachers in government schools and almost an equal number of ad hoc teachers working on pittance of an honorarium under debilitating pressure and stress of uncertainty of their jobs, the implementation of CCE was a non-starter in a majority of the government schools. No teacher, howsoever committed and competent, could conduct CCE in a teacher-taught ratio of one to 50, or even two to 150. Further, school teachers are assigned non-academic tasks like election duties, counting of cattle heads, vaccinations   and anything that requires captive manpower. For district officers, teachers are the most pliable and obedient set of people equipped to perform such distracting assignments.

The implementation of the RTE Act was announced with much fanfare in 2010. Dadabhai Naoroji had pleaded for elementary education for all children. In 1911, Gopal Krishna Gokhale had moved a Bill and resolution in the Central Legislature (1910-12) to the same effect. It was, as expected, rejected. Implementation of the century-old aspiration could become a legal reality only in 2010. Who does not recall the emphasis Mahatma Gandhi laid on education for all? In 2010, the recommendation on CCE, too, was presented as if it was a huge innovative and historic recommendation being made for the first time, which  was unfortunately not so. The Kothari Commission (1964-66) had made comprehensive commendations on examination reforms.

JP Naik, illustrious educationist and Secretary of the Kothari Commission, summarised the recommendations on examination reforms in his book The Education Commission and After, published in 1979. After incisively scrutinising the implementation of the Commission Report and the National Policy on Education of 1968, he writes: “The Commission suggested that we should move in the direction of abolishing external examinations and replacing them by a system of continuous internal evaluation; that remuneration to examiners (which is the vested interest which tends to perpetuate the system) should be abolished; that more frequent periodical assessment should be introduced to reduce the importance of the final external tests and examination technique improved; that the certificate at the end of school examinations should simply state the performance of the candidate without any declaration of having passed or failed; and that a system of complete internal assessment of students, which is not mixed with external examination results, be developed.” These recommendations were of far-reaching consequences and had the potential to give the impetus to education system.

Scrutinise the strength of another recommendation: “Examinations, especially public examinations, should be made more objective and reliable. Evaluation should enable the teacher to see the effectiveness of his instruction and enable the pupils to judge the results of their learning efforts. It should thus act as an instrument of improving both the teaching and learning processes, including the content of courses and method of teaching.” Obviously, these recommendations included acceptance of the CCE. JP Naik lamented that “very little practical effect has been given to these recommendations” and that in spite of a well-established unreliability of external examinations, we continue to depend rather solely on them.

Over the years, conditions have become more and more unfavourable for implementing the CCE. Teacher shortage and absenteeism, inadequate infrastructure and an uninviting environment in schools, lethargic approach to regular teacher recruitment and general deterioration could be cited as some of the contributors. It was necessary in 2010 to have analysed the existing scenario before announcing a three-year time frame, no exams and introduction of CCE. Non-comprehension of the ground level reality in the same year has once again delayed the universalisation of education by at least another decade.

People’s apprehension is that with changes introduced in the RTE Act in 2019, dropout rates would increase. One must remember that enrollment figures are no guarantee of attendance in schools. There are several factors that led to dropout rates but the sudden rise at the entrance to secondary level is also being attributed to the non-learning module up to Class VIII, and then suddenly confronting external examination.

As the amended Act gives freedom to every State to take its own decision on no-detention policy, it would be very interesting to study and analyse which model works better. Meanwhile, other factors that could help improve quality of education deserve greater attention. Some include appointing regular teachers, giving in-service education to serving teachers, stopping the practice of appointing ad hoc teachers on small remuneration and above all, setting teacher training institutions in order.

New evaluation procedures have to be introduced taking cognisance of the availability of Information and Communications Technology (ICT), emergence of fresh sources of learning and the advent of new methods and practice of teaching. Every effort needs to be made to help children enjoy their childhood. That is the key to quality learning.