Lalu in the wilderness

Lalu in the wilderness 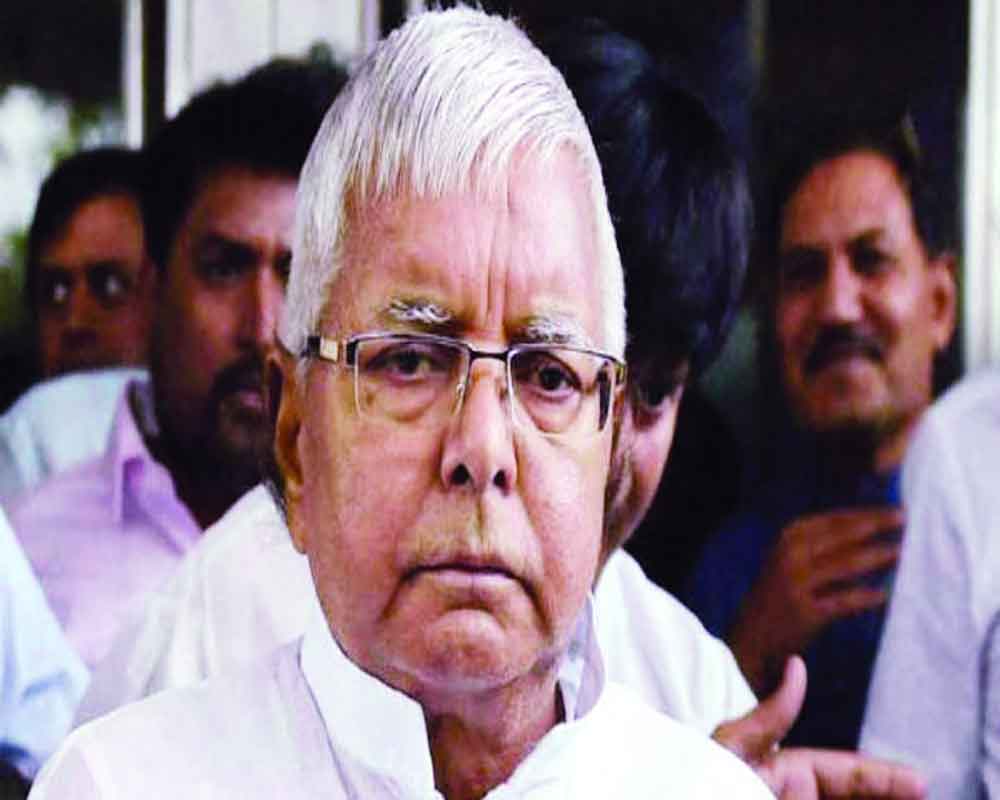 When Lalu Prasad, then a rustic Yadav chieftain and a well-established cheer leader of the JP movement, was crowned as Chief Minister of Bihar in 1990, among his backers were both Left and Right — communists and the BJP — who found a common enemy in the Congress. Thirty years later,  Lalu is in prison on corruption charges while his party is in the doghouse. Lalu, the phenomenon who overturned the template of India’s politics,  today faces apathy of  the very section of the populace that once saw a redeemer in this man who spoke their language and promised them salvation from centuries of discrimination and disgrace.

Lalu Prasad was always seen as a wily politician — someone who could even count the feathers of a flying bird. But the fact remains that he  took no time in frittering away the gains of the casteist “Mandal” politics. Primarily, because  he lacked the vision to foresee that by mocking development, encouraging corruption and lawlessness, and giving  Yadavs a carte blanche to do what they pleased to do, he was turning against his own clan and the very forces of social justice that brought him to power.

Lalu  failed to evolve with time and ignored the omen that threatened to shatter his image as the messiah of the entire OBC pantheon and usher in his political doom. Over a  period of time, his comrades in arms  of the social justice movement — Nitish Kumar, Ramvilas Paswan and others — deserted his caravan, reducing it to an assembly of Yadavs and Muslims alone. The way extremely backward castes led by Nitish Kumar and Dalits, under the stewardship of Ram Vilas Paswan, came together to challenge the Muslim-Yadav combine by joining hands with even the upper castes in the Lok Sabha polls has a clear message.  Unless Lalu Prasad’s outfit goes through a complete metamorphosis, it will never again regain the crown of Bihar.

It was this lack of political foresight that saw Lalu forcing Nitish Kumar to walk out of the alliance government in 2016. It was this lack of political foresight that stopped him from walking the extra mile to protect the RJD-JD(U) alliance in Bihar.  The break-up of the promising political collaboration and the return of Nitish Kumar to the saffron fold made for a watershed event in national politics that sowed the seeds of disintegration among the anti-BJP forces. Critics will say that Nitish acted out of “opportunism” but it was Lalu who wrote the script for his exit. Lalu and his son Tejashvi kept humiliating Nitish from a public platform, leaving no opportunity to remind him that he was a Chief Minister at their mercy. He also didn’t give a free hand to Nitish in taking administrative and policy decisions and  wanted the latter to be at his beck and call in the matter of transfer and posting.

When the CBI, apparently at the behest of the BJP,  began to tighten  the  screw against Lalu and his family in a railway hotel scam, the RJD chief did the final  miscalculation. Instead of asking his son to resign from the Cabinet to save the alliance government, he tried to bear and grin it. An image-conscious person like Nitish Kumar realised that if  he continued with Lalu, the JD(U) would end up paying the cost of policy paralysis of his governance. Lalu did not realise that his interest lay in making every possible compromise to stop Nitish from going to the BJP. The miscalculation not only gave the BJP a chance to share  power in Bihar through the backdoor but also broke the backbone of Opposition unity at the national level. Nitish, a Kurmi leader, had the image and social background to challenge Modi at the national level. He was the lone leader who could have been a rallying  point for consolidation of extremely backward castes behind the Opposition.  The breakdown of the RJD-JD(U) alliance was a turning point in  national politics and precursor to the return of the Modi regime at the Centre.

Lalu’s supporters may argue that Nitish had made up his mind — for some reason or the other — to join hands with the BJP and Lalu could have done little to prevent the parting of ways. However, few care to ponder that it would not have been so easy for Nitish either to go back to the BJP after the sort of bitterness that existed between him and Narendra Modi.  He must have felt so suffocated that he decided to swallow his pride and accept the leadership of his bitter rival, who had even questioned his DNA. It was at this moment when Lalu should have acted like a statesman and made any number of sacrifices to ensure that the Opposition remained united against the Modi government.

In parting ways with Nitish Kumar, Lalu thought he could challenge the BJP-JD(U) alliance by bringing together several non-Yadav OBC outfits under an  overarching umbrella of social justice.  But he didn’t realise that  though casteism was rooted deeply in the soil of Bihar politics, the State had also tasted the flavour of development under Nitish Kumar’s  decade-old rule. The elaborate network of roads, 24-hour electricity supply and the end of the kidnapping for ransom trade had brought much relief to the people. The State’s  revenue collection and development expenditure took a huge leap in 10 years. And the voter was not ready to turn the clock back. So when Lalu (let’s assume that it was he who was dictating the course of RJD politics from behind the prison walls) tried to expand his M-Y alliance by roping in other backward castes like Kushwahas and Mallahs and joining hands with Upendra Kushwaha and Mukesh Sahni, the experiment had few takers.

A section of Yadavs may have emotional reasons to support Lalu Prasad in his moment of crisis, and Muslims may have their own compulsion to remain hyphenated with him, but the rest of Bihar found no reason to leave its future in the hands of someone like Tejashvi Yadav, who had spent most of his time in ridiculing and humiliating Nitish Kumar.

Perhaps, Lalu got swayed by the successful experiment of the 2015 Assembly polls when the OBC and Dalits were up in the arms against the BJP over RSS chief Mohan Bhagwat’s controversial statement against caste-based reservation. But Lalu forgot that the presence of Nitish Kumar by his side played a big role in mobilising  the entire groupings of OBCs and most backward castes. The voters were assured that if Nitish remained at the helm of affairs, Bihar would not go back to the days of the jungle raj.

Lalu tried to raise the same caste passion in the Lok Sabha polls when he opposed the Modi government’s decision to grant 10 per cent reservation in government jobs and educational institutions to candidates of the general category. Lalu ignored the advice of his senior party colleagues like Raghuvansh Prasad Singh, who openly criticised his decision. While Lalu’s decision completely antagonised the upper castes, Nitish Kumar’s hold over the EBCs is so firm that the former’s gambit failed miserably.

The outcome of the polls showed that Prime Minister Narendra Modi’s astutely cultivated EBC lineage and Nitish Kumar’s sway over the non-Yadav OBC went a long way in blunting the edge of Lalu’s rusted caste device. Lalu failed to realise that times were changing and the hackneyed slogans of social justice didn’t mean much to a new generation of voters oblivious  to the obnoxious caste discrimination of the past. The days ahead could be nightmarish for both Lalu and his party. His health is sinking and there is no hope of his release from jail any sooner. Both his sons are on the  warpath and voices against Tejashvi’s leadership have begun to rise in the party.  Going by the Lok Sabha trends, the RJD will face an existential crisis after next year’s Assembly polls.

Lalu may have given a voice to  millions of socially deprived people but he failed to hear their yearning for change.  With empowerment comes aspiration, which is a major catalyst for a political shake-up  of the type that has turned a political giant into a fallen messiah.

Lalu once jokingly  said, “Jab tak samosa me rahega aloo, tab tak Bihar me rahega Lalu.”  The master of metaphors and similes that he is, it was his way of saying that, whether a winner  or a vanquished, he would forever be  remembered for his contribution in empowering the poor and hapless multitudes.

(The writer is Political Editor, The Pioneer)