Latest solar scheme is a non-starter

Latest solar scheme is a non-starter 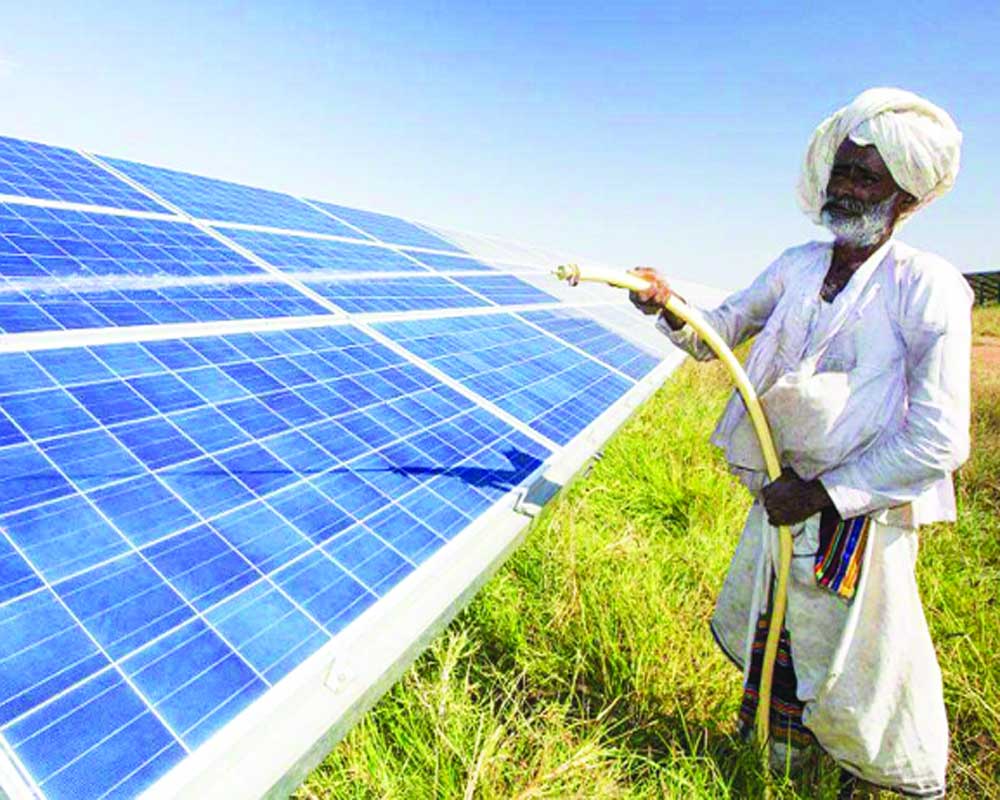 The Government’s launch of the KUSUM programme to promote solar power bodes well for farmers, DISCOMs and the environment. But there are impending challenges, including a huge financial liability on farmers themselves. Moreover, will they really be willing to join the scheme?

In a recent interview, Minister of State for Power and Renewable Energy RK Singh informed about a scheme viz the Kisan Urja Suraksha evam Utthaan Mahabhiyan (KUSUM), which the Government proposes to implement over a period of three years.

Intended to promote the use of solar energy in rural areas, KUSUM allows a farmer to use his barren land — currently lying fallow — to set up a solar plant on it for 1 MW or so (in case the land is cultivable, he can set it up on stilts and grow crop below). Whereas, during the crop season (spanning over three to four months), the farmer can use the power for cultivation, for the remaining part of the year, units generated at the plant will be purchased by the Centre.

The Union Government will give capital subsidy to cover 30 per cent of the cost while the State will bear another 30 per cent. Of the balance 40 per cent, the farmer will get 30 per cent as loan at a concessional interest rate and will have to pay 10 per cent from his pocket. The total cost of implementing the scheme is estimated to be about Rs 146,000 crore, of which the Centre’s contribution will be Rs 34,000 crore.

The scheme has the potential to bring about a fundamental transformation in not just the way farming is done to augment farmers’ income but also help in giving a new lease of life even to power distribution companies (DISCOMs), which at present are literally on a ventilator, gasping for life.

For the farmer, the solar plant will not only supply all his electricity requirement (for running pump sets and other needs, including domestic consumption) but also generate surplus, particularly during the non-cropping period, which can be sold to generate cash. Besides, this will drastically reduce spends on diesel (irrigation bill can go down by as much as 90 per cent) and help reduce the load on the environment. Saving on oil import bill will be an added bonus.

At present, there is overexploitation of ground water, courtesy unrestricted availability of electricity at heavily subsidised rates (even free in some States). However, in a scenario of having their own power source juxtaposed with an incentive that they can increase their income by selling surplus power, the farmers will be motivated to shun the current unhealthy practice, thereby conserve and prevent depletion of ground water.

For the DISCOMs, this could be a blessing in disguise. Currently, a major reason for their incurring loss year-after-year is the supply of power to farmers and households at heavily subsidised rates or even free (under direction from their owner viz, the States). Even after charging exorbitant rates from industries, they are unable to make up for the shortfall in realisation from sale to these preferred consumers. Their woes are exacerbated by large-scale power theft.

Now, if farmers can meet their power requirement from the captive source (solar plant), this will obviate the need for supply from DISCOMs. When the latter does not have to supply electricity to the former, the losses associated with such supplies (albeit at subsidised/below cost tariff) will automatically disappear.

In short, the scheme could be a gateway to a wonderland wherein farmers will be better off, DISCOMs financially healthy and environment will bear less pain. But this scenario appears too good to be true.

Given the State of Union’s precarious finances, garnering the required resources of Rs 34,000 crore for capital subsidy will be a big challenge. For the same reason, getting the States to contribute another 30 per cent will be a daunting task. Even more worrying is the balance 40 per cent, which has to be arranged by the farmer. Apart from the 10 per cent, which he has to give upfront, the responsibility of amortising the loan component, 30 per cent, falls entirely on him.

Today, the Government perceives the farmers’ economic situation to be so precarious that it was prompted to give Rs 6,000 annually to the farmers under the Pradhan Mantri Kisan Samman Nidhi (PM-KISAN) so that they can buy agricultural inputs such as fertilisers, seeds and pesticides among other things. How then are they expected to pay a huge sum of Rs 4.5 million @10 per cent (cost of 1 MW solar plant: Rs 45 million) being their contribution upfront?  Servicing the loan of Rs 13.5 million (30 per cent of Rs 45 million) will be even more excruciating as interest alone at subsidised @7 per cent will come to Rs 945,000 annually. Moreover, till such time the solar plant is commissioned and becomes operational, it will be double-whammy for the farmers, who will continue to spend money on diesel for running the pump set in addition to servicing the loan. They may not survive for the day when the gains from captive source start accruing.

Given the impending challenges in particular, a huge financial liability on them, the big question is whether the farmers will really be willing to join the scheme. This is most unlikely all the more when for decades, they are used to free/heavily subsidised power arranged by power-hungry politicians, who thrive on populist measures such as this. When the present is easy going, why would they transit to an effort-based, self-driven system san sops? KUSUM may be a non-starter!