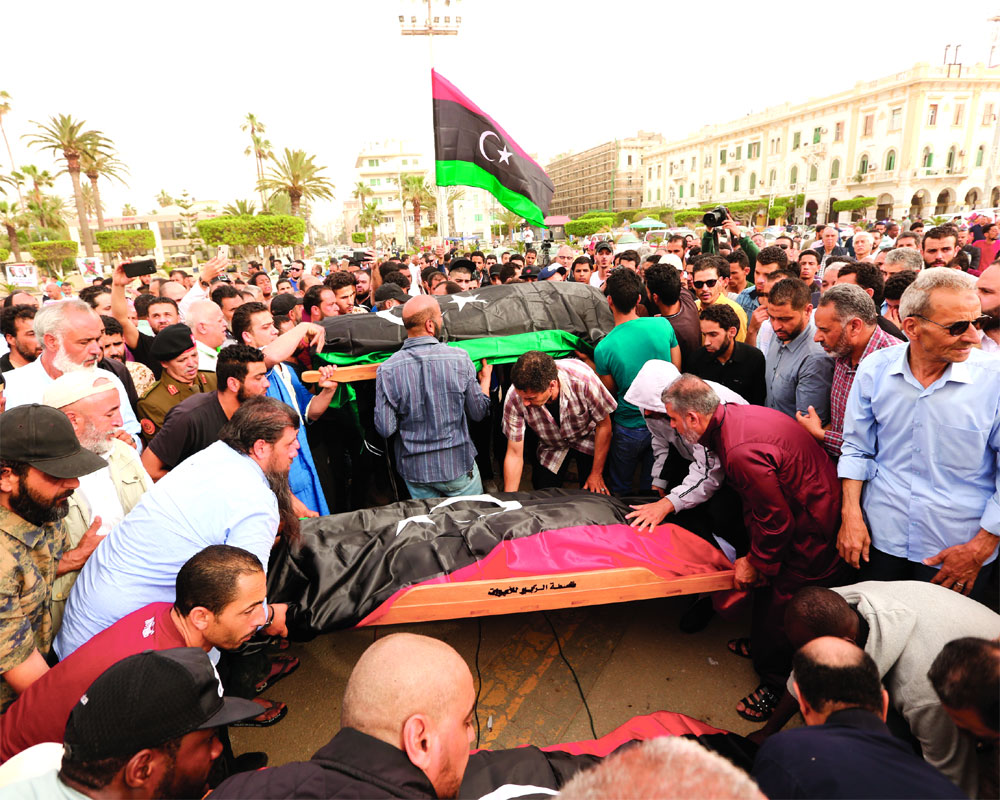 The American U-turn —  Donald Trump terming General Haftar’s role as significant in fighting terrorism and securing Libya's oil resources — has surprised the global community. The EU leaders still hope that the US will reconsider Trump's surprise expression of support to Haftar

Libya has witnessed eight years of chaos and disaster since the arrival of the Arab Spring and the assassination of its longest serving ruler Muammar Gaddafi on October 20, 2011, during the Battle of Sirte by rebels.

Since then the situation in the country has deteriorated heralding internecine battle for control of power with different warring factions raising their heads from time to time. Over the years the situation has been such that today no one knows who is fighting, shattering peace and tranquility of the country.

According to Libyan observers, it is sheer greed for power that is driving rival groups, goons and mercenaries to kill their own people. It is fast becoming a graveyard of empires.

The crux of the Libyan quagmire is that there is absence of a centralised authority that can have command and control over the entire country. Today the main fight is between the Government led by Field Marshal Khalifa Belqasim Haftar based in central and eastern Libya, spearheaded by his Libyan National Army (LNA), and the Government of National Accord (GNA), an interim Government for Libya, headed by Prime Minister Fayez al-Sarraj, constituted under the terms of the Libya Political Agreement, a UN initiative signed on December 17, 2017.

On April 4, when UN Secretary General Antonio Guterres landed in Tripoli to take part in a peace conference that would have finally made the groundwork for much delayed elections in the war-torn country, the city witnessed devastating attacks by General Haftar.

The latest round of crisis that just started is centred around General Haftar’s sudden offensive to occupy Tripoli and to dethrone the UN-backed Government of Sarraj.

However, Libya analysts and global peace coordinators have commented that Haftar’s timing of the assault is not only defeating his purpose, but has boomeranged. It is not the right moment to showcase his strength in front of the UN Secretary General. Because of massive bombings and ground fight by General Haftar’s LNA, Guterres had to cancel the conference.

Meanwhile, the 55-member African Union Congress (AUC) has just convened an emergency summit in Egypt to address the current situations in both Sudan and Libya.

The current chair of the African Union, Abdel Fattah al-Sisi, the President of Egypt, who hosted the conference, asked the leaders to develop a coherent regional response to the crisis in Libya, warning against a slide into chaos. The African Union’s Libya “troika”, which includes Egypt, Rwanda and South Africa, urged all parties to act with restraint and to facilitate the delivery of humanitarian aid.

When Haftar’s LNA started the combat mission in the beginning of this month, the American official position was that it is opposed to the military offensive of the warlord. US Secretary of State Michael Pompeo asked Haftar’s forces to return to status quo ante positions. Thus officially, the US, along with Italy and Britain, has had a very clear position: There is no military solution possible in Libya, and a UN-backed negotiations process should begin to end the impasse.

But what has surprised the international community is that a few days later Trump personally spoke to Haftar and reversed America’s stand. He praised Haftar’s significant role in fighting terrorism and securing Libya’s oil resources.

This has widely confused and divided the policy makers across party lines in the US. Besides, the EU leaders are still hoping that Trump’s surprise expression of support can be reconsidered.

The UN and Britain have seen Haftar as an immediate aggressor in the Libyan conflict. His sudden attack on the UN-backed Government in Tripoli is not widely appreciated as it has led to the death of more than 300 people so far and dashed all the hopes of a fresh solution in Libya.

As smoke and dust plumes covers the capital city of Tripoli, one can imagine how badly the dogfight has begun among the rival groups.

The way ahead for Libya is to settle for a unity Government based at Tripoli. But much before this, majority of the rebel groups need to be tackled. Equally important is to neutralise jehadis, else chances are they will keep on appearing on Libya scene to disrupt peace.

These terror elements will help escalate the crisis as their strongholds are fast disappearing across the war zones mainly in Syria and Iraq. Already, both Yemen and Libya are sheltering them and offering them adequate spaces to operate and destabilise any peace efforts undertaken by international agencies as well as by their backers in the region and abroad. Henceforth, to help Libya limp back to peace and tranquility, the regional powers, the global players and all international organisations must strive first to install an all-comprehensive federal Government in Tripoli and empower it to fight the jehadis  in all pockets.

Precisely, Haftar needs to cooperate with his rebels, including the Tripoli-based Government and make his regional allies understand that peace is possible only through the UN. He should not expose his weakness and power greed to an extent so as to make himself a nincompoop in one of the worst hit North African nation wherein he has demonstrated a bit of stability in large swathes of areas.

However, he should not forget that most of his allies in Libya are all waiting for their pound of flesh, instead of supporting him for future stability of the country.

What has encouraged Haftar is his seizure of the large parts of South Libya early this year. The Southerners gave a warm welcome to the LNA as they were tired of ethnic rife, constant tribal warfare and emerging threats from the militants of neighbouring Chad and Sudan. Thus they thought the arrival of Haftar would give them peace and stability.

But grabbing the entire West would not be easy for Haftar like it was for the South. The militias belonging to Misrata have vowed to prevent any advance of the LNA. Even the Misratans had the record of ousting the ISIS from their region in 2016. Around the same time, Haftar worked months to align with the disgruntled people who have long been frustrated with the Tripoli-based Government.

However, it may not be easy for him to convince them to overthrow the UN-backed Government overnight.

In fact, his last hope is the ultra-conservative Madkhalis, who are now aligned with the Tripoli Government. He recently met King Salman of Saudi Arabia, who has a soft corner for the Madkhalis based in his country. With this, Haftar must have developed an understanding that the same Madkhalis in Tripoli may come out in full support of his LNA.

Finally, Haftar faces an imminent danger of losing acquired territories in the East as he has deployed his entire LNA in battling the West.

Today, while looking at the political vulnerability of North Africa, particularly Sudan where people have overthrown nearly three decades of Omar al-Bashir’s rule, political optimists in Libya should be extremely cautious as it has multiple factions fighting for power. Broadly, crisis in Sudan simply shows that commoners are angry, frustrated and disillusioned with the power elites. But the pertinent question here is: Can there be a guarantee of political stability immediately after the exit of a long serving autocrat who has hardly left behind a successor? Thus, Sudan heads for a political vacuum and leaves behind large space for the old cronies of Bashir. This smacks danger both for the civil society and for the incoming rulers who have just taken over to prevent chaos in the country.

Compared to Sudan, Libya is entirely a different political ball game. But then as both nations are contiguous, chances are that trouble in one country might spill into the other.

It is the historic Arab Spring that has brought people to the heart of political discourse in larger parts of West Asia and North Africa wherein mostly autocrats or family dynasties rule for decades.

Common people have felt empowered and a sense of change has swept through all these nations. It is indeed all about the strong influence of information and communication technology that has made the Arab Spring possible, and ignited the Arab youth, the “centre of change” in the backyards of their age-old dictatorial regimes.

Though the signs of change has started to appear vivid, the Arab Spring has failed to bring “revolution” in true sense of the term anywhere.

Such historic upheavals can rightly be recounted through what Noam Chomsky conveyed in these words, “In the entry on propaganda in the Encyclopedia of the Social Sciences in 1933, Harold Lasswell explained that we must not succumb to democratic dogmatisms about men being the best judges of their own interests.”

But then, people must ensure that decisions are taken by farsighted leaders on their behalf. What worries the global community is that in Sudan, people have taken law and order into their hands after suffering decades under the Bashir regime. And in Libya, sadly, there is acute shortage of farsighted leaders who could be trusted by the people.

It is complicating the game in Libya and pushing once-a- very-stable country into nowhere. Haftar, a general who is fast ageing (now 75 years), must realise how long he could hold on to the opportunists who are now with him for vested interests.