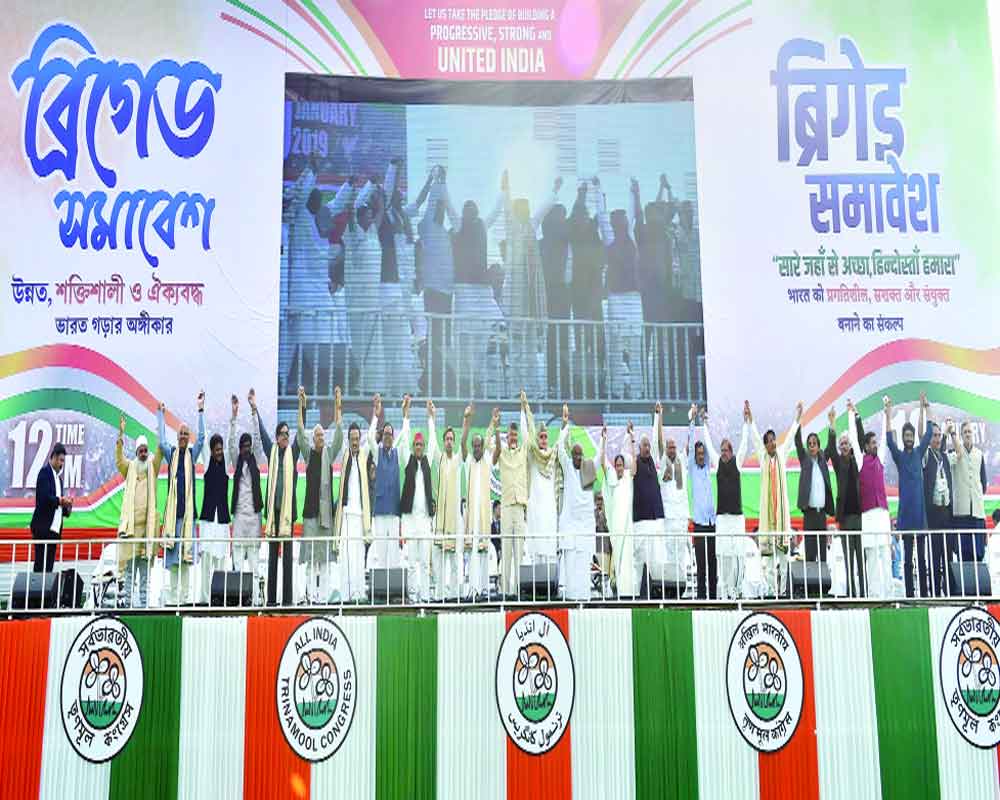 A political party or an expedient coalition may pin hopes on favoured coverage in the media to sail through the coming general elections, but it will be travesty of the Indian democracy if imagined truths, rather than actual promises, influence voters’ decision at polling booths

In May 2004, the ragtag band of coalition led by the Congress pipped the Atal Bihari Vajpayee Government to the post as the latter failed to weave a dominant narrative of India Shining, despite the BJP regime being the boldest Government to earn India the “nuclear state” tag. Five years later in 2009, the UPA pulled through anti-incumbency with its overriding stories of higher economic growth — the fact that the foundation was laid by the previous BJP Government was consigned to oblivion — and higher job generation rate, albeit for daily wagers via its flagship MGNREGA. In December 2013 Delhi Assembly election, the BJP missed the majority mark but the Aam Aadmi Party (AAP), in the name of anti-corruption crusade, trounced the 15 years rule of Sheila Dikshit, who bore the brunt of voters’ ire as by then the Opposition had successfully constructed the narrative of the Congress-led UPA heading the Government of scams. Next year, the Modi wave, coupled with the stories of vibrant Gujarat under his leadership, did the UPA in.

One thing was common in all these election results, except in the 2014 LS polls: Perception was stronger than reality on voters’ minds. The India Shining “success” and the poll slogan proved an abject failure. MGNREGA that was hailed as a universal job scheme and had tremendous contribution in giving UPA-I another chance in power could not withstand the narrative of series of scams under the UPA-II Government. And in Delhi, the AAP cashed in on the civic society movement for anti-graft ombudsman Lokpal, only to eschew the cause after gaining power.

In the present scenario, the buzz doing the rounds in the Opposition camps is that the Congress’ good show in the recently concluded Assembly elections is a sign of voters growing weary of BJP’s Achchhe Din promise. The assumption underlies the efforts to cobble together coalitions in the unanimous hope that people are yearning for a change at the Centre. However, there is a wide divergence of opinion on who can lead these disparate coalitions and who can take on the mantle of the prime ministerial candidate.

There is a parallel but smaller buzz, a murmur of agreement that no single party in the Opposition camps is in position to take on the formidable Narendra Modi successfully. While the perception that the Modi Government is on its last legs is gaining ground, the fact that the formation of alliances out of expediency to save Opposition parties from the existential threat in the event of Modi returning to power has not come out well in the public sphere. Therefore, despite serious misgivings about the PM-like leadership potential of Congress president Rahul Gandhi, or for that matter any other leader in the Opposition camps, partners are straining every nerve to project camaraderie. But everything is not so smooth. To project a united face against Modi, the “united” Opposition should have a single common big national party around which the coalition can stick together. That common single big national party should naturally have been the Congress. But till now the Opposition groups have not given that slot to the Congress. For example, in biggest State UP with 80 Lok Sabha seats, the SP-BSP alliance has left just two seats for the Congress. In Andhra Pradesh also, the TDP is likely to go solo. Despite the grand Opposition unity extravaganza in Kolkata, Mamata’s TMC is unlikely to accommodate the Congress as long as she can hope to win allies to support her ambition of becoming Prime Minister. The perception is that a strong Central party weakens the potential of regional players, and therefore a weak Congress will serve their interests in case the coalition comes to power.

However, nobody knows how voters will react to the unspoken concept of a weak Central party in the coalition. In fact, the multi-dimensional process of construction of public perception is very complex. According to a psychological theory, everybody always try to think they are right. And therefore, naïve or rather neutral voters are carried away by the wave, real or fabricated, lest their votes go to waste. It is not with the voters alone, even a section of the media falls into that trap. In order to prove the news report are facts, they often perform great mental gymnastics by reinforcing a supportive narrative under the guise of disseminating information.

Therefore, measures like Triple Talaq Ordinance, SC/ST Prevention of Atrocities Act, ten per cent reservation for economic weaker section among general category, etc, always come with competing narratives, one by the Government and the other by the anti-establishment. Whose narrative gains prominence depends on the understanding and interests of force multipliers, like media and civic society groups. Studies have proved that people generally consider media perceptions as truth and accordingly react to the reports. It is also because it is a Herculean task for them to verify the media reports. However, media’s credibility and trust hinge on pre-existing notions developed in the course of news/views consumption. Similarly, there are areas people mistrust media and media persons if their known political allegiance and economic interests stand in stark contrast to theirs.

But the most intriguing is the media behaviour. The common refrain is that the media is divided in two camps: Pro-Modi, anti-Modi. Views are openly woven in news stories. The perception is that the Modi Government has been against the media, particularly print and electronic. One reason of this strong perception may be the Modi Government breaking the culture of media persons’ strategic framing of politics and bureaucracy by keeping decision-making process confined to the persons concerned. The crackdown on the tradition of top journalists’ trading secret information may have ruffled a few feathers.

It may have helped the Opposition camps beat the BJP in the war of perception, by setting themselves at the ideal position by way of keeping the attack, information, and arguments consistent. A tinge of “facts” can further reinforce their narrative. And so were the results in Chhattisgarh and MP Assembly polls. Despite all welfare measure by the State Governments, the perception of farmers’ distress sprung the Congress back in power there. The BJP has failed to weave the narrative of post-poll scenario in these two States: A farmer in MP got meagre Rs 13 loan waiver instead of the promised Rs 24,000, but that is not “big” news.

It is tragic that we are moving away from objective truth towards the culture of perception. A political party or an expedient coalition may pin hopes on favoured coverage in the media to sail through the coming general elections, but it will be travesty of the Indian democracy if imagined truths, rather than actual promises, influence voters’ decision at polling booths.

(The writer is Associate Editor & News Editor, The Pioneer)