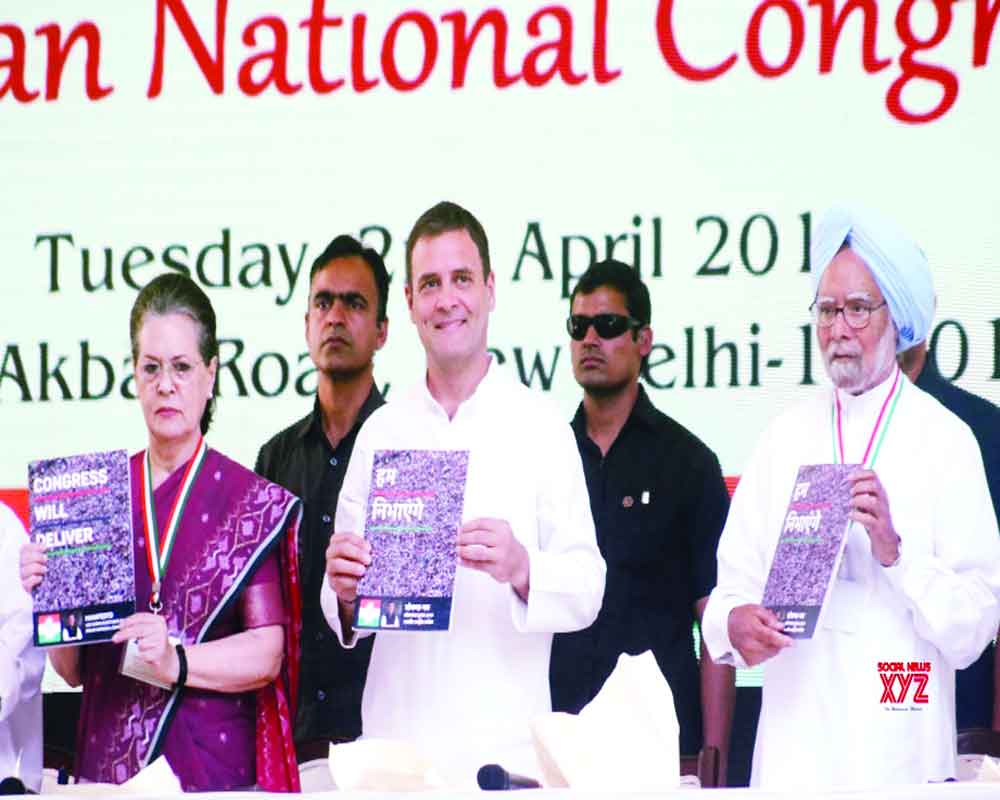 The Congress manifesto hopes for sympathetic amnesia by talking just about governance and politics post 2014. It’s hard for the people to forget the disturbing Emergency

The Congress recently released its manifesto. As it is India’s oldest party with presence in every part of the country, however nominal and depleted it may be today in many States, its statement of intent, should it come to power, must be read with utmost seriousness. However, while doing so, one must test its assertions, claims and promises on the anvil of truth. The first impression one gets from reading this document is that the party would like us to believe that the history of democratic India began in 2014! The entire narrative is pinned on this premise because if it were to go back, it would have to account for its past sins. In other words, while it makes the most noble declarations about democratic values, the Constitution, its commitment to federalism and to fight corruption, it would like the nation to forget its own dreadful track record when it imposed a dictatorship on India in 1975-77; when it crushed non-Congress Governments time and again over several decades using pliable Governors; when it brought a vicious defamation Bill to curb the media during Rajiv Gandhi’s prime ministership and, of course, when it was caught in the Bofors bribery scandal.

The manifesto is hoping for sympathetic amnesia on the part of the electorate by just talking about governance and politics post 2014 and hoping that the people will forget its pathetic record when it governed this country for close to 60 years. It is, therefore, time to tickle public memory and leave it to their wisdom to remember or forget the disturbing events of the past.

The manifesto begins with a foreword by Congress chief Rahul Gandhi, who began with a rhetorical question: “Will India be a free democratic country and will Indian people be free from fear?...Or will India be governed by a pernicious ideology that will trample upon peoples’ rights, institutions, conventions?...”. This is exactly the question that was on the top of every Indian’s mind when the Congress imposed a fascist regime on the nation during the Emergency.

Further, he claimed that his party stands committed to “truth, freedom, dignity, self-respect and prosperity of our people.” This statement must be tested on the anvil of truth. The manifesto loftily proclaims that  “Freedom is the hallmark of our open and democratic Republic. The purpose of law is regulation in order to strengthen freedom. Laws must be just and reasonable and reflect our constitutional values.”

The question we need to ask ourselves is whether the Congress has the moral right to even discuss these core democratic principles. If freedom is the hallmark of our Republic, why did the party impose an Emergency and snatch away all the fundamental rights of citizens? If laws must be just and reasonable and reflect Constitutional values, why was the dreaded Maintenance of Internal Security Act (MISA) enforced ruthlessly in 1975-77 and why were all leaders of the Opposition incarcerated? Why was the 39th Amendment introduced to put Indira Gandhi above all other citizens and bar the Supreme Court from hearing her petition? Why were the essential features of a democratic Constitution like equality before law and right to life and personal liberty done away with?

Let us turn to the media, institutions and the judiciary. About the media, the manifesto says the party firmly believes that “the media must be free and self-regulated.” It says it will “uphold editorial independence and guard against Government interference.” Really? This is the same party which cut off electricity to newspaper offices in New Delhi on June 25, 1975, jailed 253 independent journalists, banned many foreign correspondents, imposed censorship on the media and even appointed an Inspector-General of Police as Chief Censor in Karnataka. This is also the same party which classified newspapers as “friendly”, “neutral” and “hostile” during Indira Gandhi’s time and brought a draconian defamation law to curb Press freedom when Rajiv Gandhi was the Prime Minister. Can we trust this party when it comes to media freedom?

The Congress’ manifesto promises that it will restore “the dignity, authority and autonomy” of institutions like the Election Commission of India. Is this believable, given the conduct of this party in the past? When the Shah Commission probed the excesses during the Emergency, the Superintendent of Tihar Jail told the Commission that Navin Chawla, who was close to the Nehru-Gandhis, asked him to throw political prisoners in asbestos cells and “bake” them or to dump them in the lunatics cell. Referring to Navin Chawla, the Shah Commission said, “tyrants sprouted at all levels overnight...”. It said Chawla conducted himself in an “authoritarian and callous” manner and rendered himself “unfit to hold any public office...”.

Is it not amazing that the party, which appointed Navin Chawla as an Election Commissioner in 2005 when Sonia Gandhi was the de facto Prime Minister, is now claiming that it will “restore the dignity, authority and autonomy” of the Election Commission and other institutions? Even more amazing is its promise that appointment to these bodies will be transparent and institutional integrity will be protected.

As regards the judiciary, the Congress has a terrible record. In the 1970s, it superseded three Supreme Court judges, clamoured for a “committed judiciary” and hurled abuses and threats on judges on the floor of Parliament. In fact, in November 1976, in the Lok Sabha, one Congress MP asked the Supreme Court judges if they had “the temerity” to go against the Government and went on to say that the party had its “methods and machinery” to deal with such judges. Now in manifesto 2019, the Congress has promised that “the independence and integrity of the judiciary will be maintained.” Given the party’s discomfort with an independent judiciary, this promise must be taken with a bag of salt.

Finally, a word about corruption. The manifesto claims that the party will take “determined steps” to bring back scamsters. This is the very party which ensured the exit of Italian businessman and Sonia Gandhi’s friend Ottavio Quattrocchi, who pocketed a commission of $7.3 million when we bought field guns for our Army from Bofors and got the UK Government to unfreeze his bank account so that he could walk away with the loot.

Somewhere in the beginning of the document, the party talks about its commitment to the Constitution and says, “Our record speaks for itself...We have done it before. We will do it again!”

Given the party’s track record, does this not sound ominous?