Mamata’s mega Kolkata rally to test the unity of Opposition

Mamata’s mega Kolkata rally to test the unity of Opposition 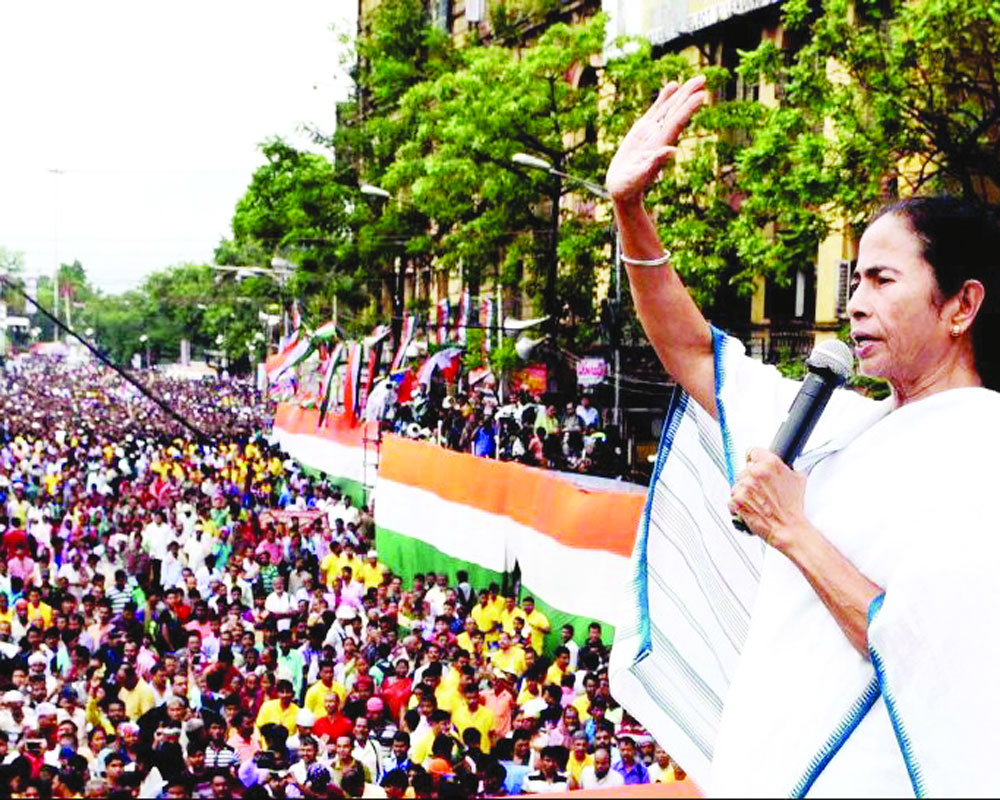 Mamata Banerjee is all set to address a mega rally in Kolkata’s Parade Ground on January 19, and the All India Trinamool Congress (TMC) has set a target to ensure a turnout of 15 lakh people. The rally has a two-pronged purpose: On one hand, it will be Mamata’s show of strength, and on the other, it will be a test of the Opposition’s unity. That is why all eyes are on the upcoming rally to see who turns up. Congress President Rahul Gandhi and the Bahujan Samaj Party (BSP) chief Mayawati are among the most eagerly awaited participants. Both parties have sent a participation confirmation, but it is yet to be seen whether the two party chiefs will attend the rally. The presence of the Left parties, especially the CPM, is also not confirmed.

Apart from these, almost all stalwarts of the Opposition will attend the rally.  Akhilesh Yadav and Tejashwi Yadav will certainly be a part of Mamata’s rally, as will Sharad Pawar. Sharad Yadav — who has formed the Loktantrik Janata Dal —will also attend. Former PM HD Deve Gowda will also participate, and Arvind Kejriwal has also given his consent.

One peculiar thing could be the presence of Chandrababu Naidu — who is trying for an Opposition alliance — alongside KCR, who is trying to put together a federal front. From the DMK, either Stalin or Kanimozhi will participate in the mega rally.

The BJD’s participation is also a given, but the representative’s name has not been disclosed yet. It is clear that Mamata is trying to bring all anti-BJP parties on her dais, which is why she has invited several activists and leaders who are against the party. Jignesh Mevani, who is an Independent MLA from Gujarat, has also been invited. Three former ministers of the BJP — Shatrughan Sinha, Yashwant Sinha, and Arun Shourie — have also received an invite, and are likely to be present in the rally.

The gap between the Shiv Sena and BJP is widening in Maharashtra, and the two parties have stopped all communication. Sources say that from mid-November to December, two attempts were made to start talks between them, but to no avail. It is said that in both  meetings, talks didn’t extend beyond normal courtesy. A Shiv Sena leader said when there was no talk about alliance, there was no question of talking about the seat-sharing arrangement.

Now, Amit Shah has told his party leaders to gear up for a solo fight, and has set a target to win 40 seats of the total 48. The Shiv Sena has also said that the BJP must test its strength by going alone. In fact, the Sena is ready to finish itself just to weaken the BJP in the State. A Sena MP said his party didn’t get strength from the Government. He said that the Shiv Sena had ruled the State from 1995 to 1999, but after that, stayed out of power for 15 years in the State, and for 10 years at the Centre. Despite that, its strength didn’t diminish but only increased. He said the Shiv Sena is not bothered about its own defeat, but would ensure the BJP’s fall. The Shiv Sena chief Uddhav Thackeray is apparently of the view that when the BJP weakens, he will get more importance, and following that, the BJP will go into an alliance like it did with the JDU in Bihar. The Sena’s motive is to put the BJP in its old place, so that Uddhav’s status is like that of Balasaheb among the next-generation leaders.

BJP LEADERS ON A MISSION

After defeat in three States, the BJP has been facing many questions from within and outside the party. To put an end to all doubts, Narendra Modi and Amit Shah have roped in five senior leaders of the party to embark on a mission. Shah has formed several committees, and given some or the other responsibility to almost all big leaders. Though most of the responsibilities given to senior leaders pertain to routine work, which was being accomplished by middle-level leaders.

Rajnath Singh will prepare the party manifesto, which, some say, is no different than the previous one. Very little new information can be added to the manifesto, which has mostly been announced by Modi in rallies. Of course, Jaitley has been assigned the charge of election campaign, a befitting role at that. Former party president Nitin Gadkari has been given the task of coordination of NGOs, a work usually done by State-level leaders. Sushma Swaraj has been told to prepare the literature of the party. What is interesting is that party literature already exists, so her role will be clear when she begins work on it.

Ten MPs and ministers from the Rajya Sabha have been given crucial responsibilities and the charge of important States. JP Nadda has been assigned Uttar Pradesh and all three co in-charges, who had been deputed earlier, will work under him. Prakash Javadekar has been given Rajasthan, and Thawar Chand Gehlot has been made responsible for Uttarakhand. Piyush Goyal has been roped in for Tamil Nadu and Puducherry, while Nirmala Sitharaman has been given Delhi. Thus, five ministers from the Rajya Sabha have been allocated important responsibilities.

Five Rajya Sabha MPs — Bhupendra Yadav, Anil Jain, Muralidhar Rao, V Muraleedharan, and OP Mathur — have also been made election in-charges. Bhupendra Yadav will look after Bihar, and Anil Jain has been given Chhattisgarh. OP Mathur will oversee Gujarat elections, Muralidhar Rao will look after Karnataka, and V Muraleedharan will be in-charge for Andhra Pradesh. For the rest of the States, Amit Shah has roped in MLAs and ministers from various States. Mangal Pandey — the minister from Bihar, who was in-charge for Himachal Pradesh — has now been given the responsibility of Jharkhand. Minister of Haryana, Captain Abhimanyu, has been given Punjab. UP Minister Swatantra Dev Singh will steer the campaign in Madhya Pradesh. MLAs Nitin Naveen, Vishwash Sarang, Kiran Maheshwari, and CT Ravi have also been made in-charges. Among the Central officials, Arun Singh has been given Odisha, and Avinash Khanna has been given Tripura and J&K. Sudhanshu Trivedi has been made co-in charge of Rajasthan.

Raipur to get new cremation grounds for Covid patients