Missing out on deliverables

Missing out on deliverables 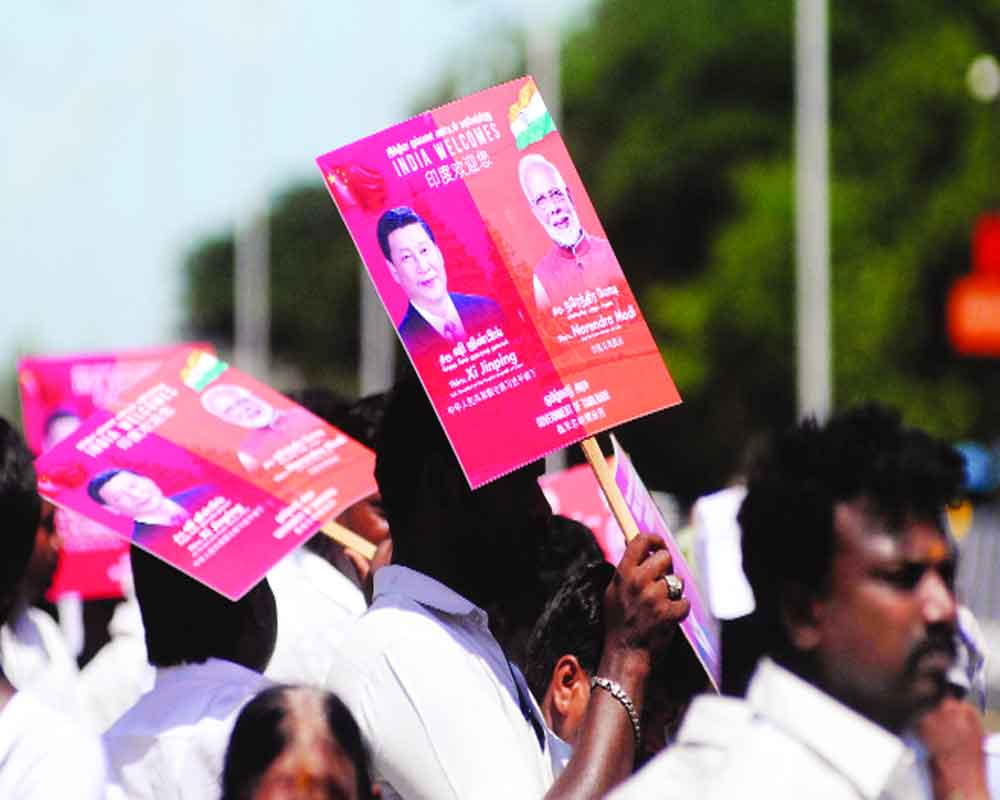 Despite informal summits like Mamallapuram, both India and China will have to live with certain realities, which are seemingly irrevocable even though they breed mistrust

It wasn’t surprising that the just-concluded informal summit between Prime Minister Narendra Modi and Chinese President Xi Jinping was high on optics and low on concrete deliverables, which is why it holds the potential to remarkably transform the bilateral relationship between both nations. Given the choice of the locale in the picturesque, the ancient heritage and coastal city of Mamallapuram, India’s historical connect with China, together with the UNESCO recognition to the southern city, provided a fitting landscape for overwhelming optics. On the other hand, the meeting was expectedly low on deliverables, owing to the fraught nature of bilateral issues like trade, border dispute and now China’s open support to Pakistan on the internal reorganisation of the former State of Jammu & Kashmir — all of which require more than a quick-paced informal meeting to be resolved.

As such, the Mamallapuram summit builds on the tradition of informal engagements between the two countries after the Wuhan summit in 2018 and can be seen as an overarching framework to further Confidence-Building Measures (CBMs). The eased setting of such summits has the potential to create grounds for discussions on issues that could otherwise irk the other nation. The decision to issue separate statements on the summit defends its “informal” nature and, therefore, calls for both nations to not make every minute details of the meet public.

Even though the Ministry of External Affairs (MEA), India, described the visit of the Chinese President as “highly productive”, doubts remain regarding countable deliverables specific to this visit. In his brief to the media, Foreign Secretary Vijay Gokhale said that from the Wuhan summit in 2018 to the Mamallapuram summit in 2019, India and China have made “visible progress.” If one were to deconstruct the ambiguous reference to “progress”, the only visible stride appears in the area of trade through a “mechanism” proposed by President Xi. Joint assurances to fighting terrorism and radicalism, which were part of the discussion, have been referred to in the past, too, through forums such as BRICS and the Shanghai Cooperation Organisation (SCO). Therefore, they do not necessarily qualify as “progress.”

India’s need for greater market access from China and lowering its trade deficit found traction in this summit mainly because the Middle Kingdom is already under pressure on the trade front, owing to its ongoing trade dispute with the US. The Trump administration in no mood to step back. As such, granting larger market access to India could be the prominent and possibly the only countable deliverable in the near term from this summit. Progress on issues such as India joining the Regional Comprehensive Economic Partnership (RCEP), 5G technology involving Huawei and Kashmir, even if discussed, is hard to imagine.

During the Wuhan summit, both nations  agreed to jointly cooperate on projects in third countries. Although cooperation between the two sides in Afghanistan has shown potential, little progress has been made. The lack of substantial progress in Afghanistan from the last agreement must have prevented any further discussion on this issue.

Resolution of disputes and big-ticket outcomes were not expected in this summit as in matters concerning bilateral issues of Indian concern, China is either at an advantageous position vis-a-vis India or has a clearly different position than us. In trade, too, numbers are highly favourable to China, leaving India to seek balance. On the issue of border dispute, Beijing has little appetite for resolution, which was very much evident by the progress made in the talks held by the Special Representatives of both nations.

The lack of any joint communique also signals a conscious projection of optics over substance. It is evident that China’s projected intentions in Mamallapuram can be seen as distinct from an otherwise different Chinese State behaviour.  This was on display hours even before the Modi-Xi meeting took place, especially apropos China’s stand and steps on the Kashmir issue. This strand in the Chinese behaviour is also evident in the nuanced dichotomy between its stated positions and actions on ground vis-a-vis India. For instance, there is a clear disjuncture in its projections at the border — in subtle ways through certain elements of the Chinese military — which is in variance with Beijing’s stated position. This allows China to either deny or distance itself from the activities of such actors, with the State itself having tacitly approved such behaviour.

While the Mamallapuram summit gracefully displayed India’s cultural diplomacy girded up by elements of Atithi Devo Bhava (the guest is equivalent to god), it tacitly legitimised the acceptance of China’s flip-flopping positions on issues sensitive to India, especially Kashmir. This is important both in the context of China’s recent steps and rhetoric on Kashmir as well as from the point of view of current geopolitics, where diplomacy, to a great extent, is also about symbolism, optics and messaging. China’s growing relations with Pakistan are increasingly dragging India in bilateral dynamics. The summit could have been used to send a subtle message to China vis-a-vis the latter’s relations with Pakistan.

As such, when dealing with China, India should continue to assert the principles that it stands for and unflinchingly project its standard positions on issues that are of global concern. To be sure, for China, Pakistan is a strategic leverage point, bound as they are by economics and not an iron-clad alliance. That China had to finally relent on its move to block the listing for Masood Azhar as a terrorist at the UN, shows that the China-Pakistan relationship has scope for tweaks when there is enough international pressure and criticism.

The short history of China’s relations with Pakistan has shown that when India puts its foot down on an issue, China is likely liberal in its relations with Pakistan, to the disadvantage of Islamabad. This is exactly how most relations of dependence between affluent and manipulative major powers and developing economies have shaped themselves through history.

The pros and cons of such relationships get affected by the extent of separation between major powers’ affluence and their manipulative intentions and the state of economic, political and military clout of the dependent State. China’s investments in the China–Pakistan Economic Corridor (CPEC) and their consequences have blurred the line that separates strategic intentions and economic goals for China in Pakistan. For the latter, the state of its economy, which lies in an uncertain zone — between that of a Least Developed Economy and a developing economy — has made the terms of engagement with China more unfavourable for itself.

Despite informal summits like Mamallapuram, both India and China will have to live with certain realities, which are seemingly irrevocable, even though they breed mistrust. Just as India’s decision to internally reorganise the former State of Jammu & Kashmir has become China’s concern but cannot be rescinded, so have China’s investments in the CPEC for India, parts of which pass through the Pakistan-occupied Kashmir (PoK) region. India’s relations with China will have to factor in a continued tenuous relationship on the one hand and sustained bilateral trade on the other. These dynamics will continue to have substantive scope of scepticism from either side.

What has also come to the fore is the need for an uplift in India’s international diplomacy with regards to China. While Beijing has upped the ante against us and has taken unprecedented steps, India remains painstakingly accommodating of such criticism. It is time India’s regional and global aspirations and role match its pitch in international diplomacy.

(The writer is Research Fellow, Indian Council of World Affairs)