Mistake to exclude Congress from SP-BSP alliance in UP?

Mistake to exclude Congress from SP-BSP alliance in UP? 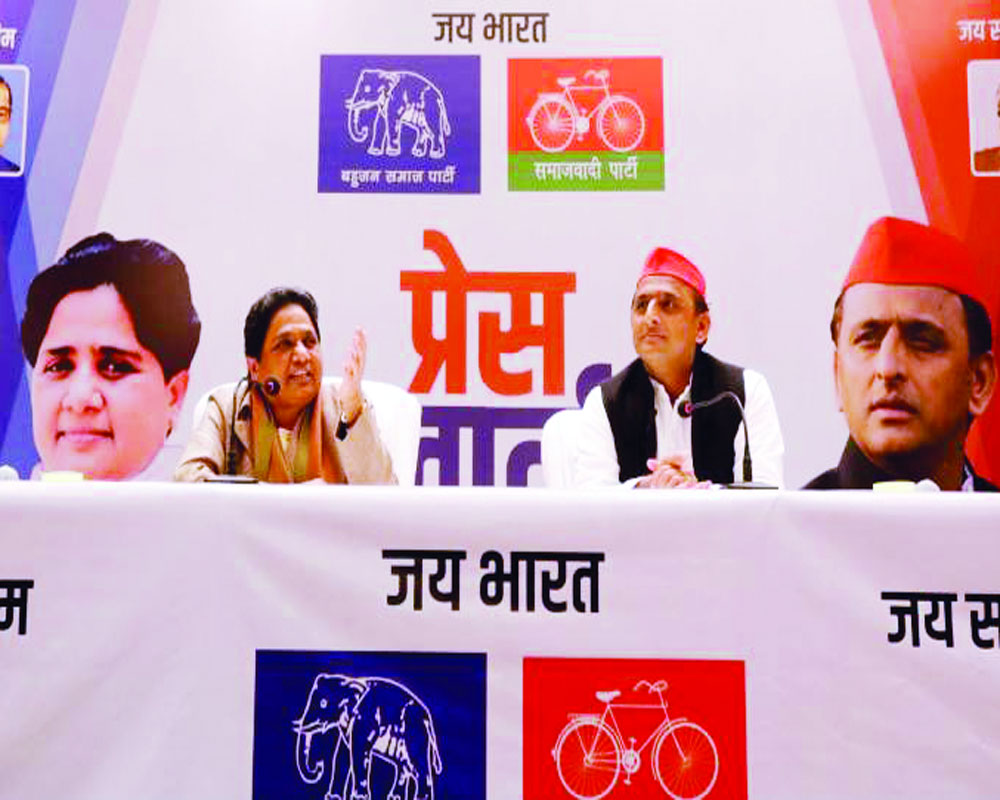 Are the Bahujan Samaj Party (BSP) and Samajwadi Party (SP) making a mistake by leaving the Congress out of their alliance? The question looms large as Congress leaders and their supporters compare the present scenario with the situation of Bihar in 2009 when two alliance partners of the Congress went together, leaving the party out. At first sight, it seems history is repeating itself. At that time, the then Railway Minister and leader of 25 MPs, Lalu Yadav, had joined hands with another Central Minister, Ram Vilas Paswan, and distributed the Lok Sabha seats among themselves, leaving the Congress out. Lalu and Paswan had jointly addressed the media in a Delhi hotel and, some say, Lalu didn’t even take calls from either Rahul Gandhi or Ahmed Patel.

At that time, both had said that the Congress had the capability to win only three seats and thus they left three seats for the national party. When the results came out, the Congress had won two out of three seats, Lalu had won only five out of 25, and Paswan came down to zero from five seats. The same year, the Congress performed well in Uttar Pradesh. The party had fought alone and won 22 seats in the State. Overall, the party went up from 145 to 207.

Now, the Congress leaders say there will be a repeat of 2009. In 2009, the SP and BSP fought separately, and the BJP was in its worst phase, winning only nine seats in the State. Then, two masterstrokes by the Congress — loan waiver and nuclear deal with the US — had pulled the middle class towards the party.

This time, however, the situation is quite different. The Congress is in a bad phase, while the BJP is a mighty force. This time around, 19 per cent Muslim voters are facing no dilemma and are not confused about who is fighting against the BJP. The SP and BSP are in a direct fight against the BJP, so they might get Muslim votes along with their core vote banks,  Yadavs and Dalits. The SP-BSP decision to leave the Raebareli and Amethi seats will hopefully make things less daunting for Rahul and Sonia Gandhi.

RAHUL’S MEGA PLAN FOR UP

Now, Rahul is all set to start his fifth election campaign in UP. Ghulam Nabi Azad and Raj Babbar have declared that the Congress will go alone in the State under Rahul’s leadership. It is being reported that Rahul has planned 15 rallies in UP in the next month alone. Rahul is expected to address some more rallies in March before the announcement of elections. Apart from this, he will also tour his constituency.

There is speculation that Rahul might talk to his cousin, Varun Gandhi, and could even offer him the command of the party in UP. It now seems highly unlikely that Varun will fight on a BJP ticket. All this and more has put UP politics in a very interesting phase. Several developments are expected — from the appointment of a new State President to Rahul’s tour across UP. MAYA-AKHILESH STRATEGY

After the announcement of the SP-BSP alliance, all eyes are on the seats. Both parties are holding discussions for each seat and taking stock of the future scenario from their own perspective. Normally, the BSP will get more seats from western UP, and the SP will focus on eastern UP. The BSP will focus on Dalit-Muslim dominated seats, while the SP will target Muslim-Yadav dominated seats. Apart from deciding on the seats, both parties are looking for candidates who are capable of winning elections on their own.

On the other hand, the BSP chief will face elections after 15 years. She has been an MP from the Akbarpur seat twice. At present, she is not a member of any House of Parliament. Earlier, it was being said that she might contest from Etawah, but the seat will go to the SP.  So, Maya will get another seat. Other big leaders of her party will also contest the upcoming Lok Sabha Elections.

WILL IT BE HARDIK VS MODI?

Who will be the Opposition’s candidate against Prime Minister Narendra Modi? The last time around, Arvind Kejriwal had contested against Modi from Varanasi. Though there were candidates from other parties too, the main opponent was the Aam Aadmi Party (AAP) chief Kejriwal. This time, it is being said that all Opposition parties will put forward a joint candidate. The SP and BSP have gone into an alliance in UP. At the same time, Kejriwal has announced that he will not fight from Varanasi. So, if the Congress agrees, a joint candidate can be fielded against Modi.

But the question is who will be the joint candidate from the Opposition? There is speculation that the Opposition parties are mulling over a candidate from Gujarat to defeat Modi, and Patidar leader Hardik Patel’s name is in the forefront. It is noteworthy that there are a lot of Kurmis, also called Patels, in and around Varanasi. If Hardik becomes the joint candidate of the Mahagathbandhan, he will also get Yadav, Dalit, and Muslim votes. Another school of thought is that if Modi contests from a Gujarat seat, Hardik will certainly challenge him. However, Shatrughan Sinha is also in the race for the Varanasi seat, and many Opposition leaders are trying to persuade him to contest from Varanasi instead of the Patna Sahib seat in Bihar.