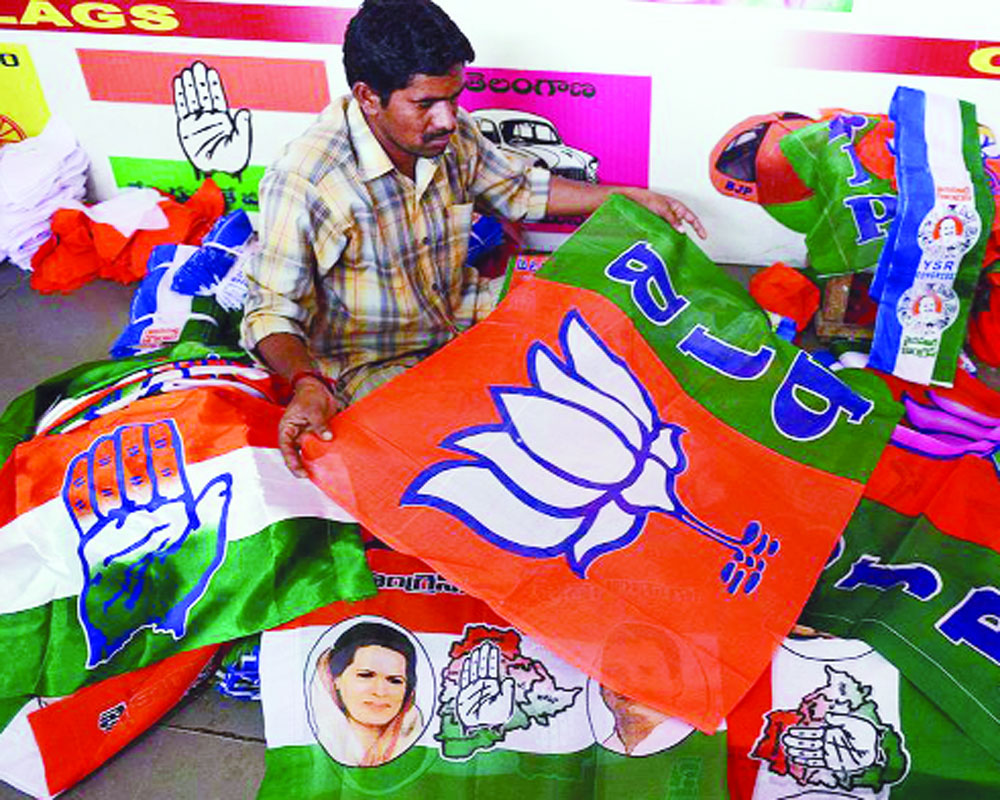 Although muscle power has been brought under control, electoral spending has reached monstrous proportions. The Election Commission must come face-to-face with this reality

Although the use of muscle power to capture booths and intimidate voters belonging to vulnerable social groups has drastically come down in recent years, the percentage of candidates with criminal records still remains a matter of concern. But the bigger worry is money power. During a recent tour of some constituencies in Karnataka, this writer heard from political leaders and those in the know that in most constituencies, candidates have to spend upwards of Rs 20 crore to be in the reckoning. There was also near unanimity that some candidates in the old Mysore area had spent over Rs 100 crore!  With top contenders in every Lok Sabha seat spending phenomenal sums of money, the democratic process is now out-of-bounds for an average citizen.

The National Election Watch (NEW) and the Association for Democratic Rights (ADR) have been providing detailed analysis of the information provided by candidates in their sworn affidavits while filing their nominations. Their analysis of the 521 members of the outgoing Lok Sabha, based on their affidavits, should be a matter of deep concern.

The NEW-ADR analysis found that 174 of the 521 MPs had declared that criminal cases were pending against them, constituting one-third of the Lok Sabha. Further, among them, 106 MPs (20 per cent) were facing serious criminal cases like murder, attempt to murder, kidnapping and communal disharmony among others. Thirty-five per cent of the MPs belonging to the Bharatiya Janata Party (BJP) and 16 per cent of the Congress and AIADMK MPs in the outgoing Lok Sabha have criminal backgrounds. However, the Shiv Sena topped the list with 83 per cent of this party’s MPs having criminal records.

As regards the financial muscle of candidates, the survey showed that of the 521 sitting MPs, 430 (83 per cent) were crorepatis in 2014 and they had average assets of Rs 14.72 crore. Eighty-seven per cent of the BJP MPs are crorepatis, as against 82 per cent in the Congress and 78 per cent in the AIADMK. The average asset base of BJP MPs was Rs 12 crore, while that of Congress MPs was Rs 15.47 crore.

A recent report by NEW-ADR, after examining the affidavits of candidates in the fray in the first two phases of the current Lok Sabha election, is also revealing. Out of the 2,923 candidates, the NEW-ADR analysis of 2,856 affidavits shows that 464 have criminal records, constituting 16 per cent of the total. Of them, 313 candidates have serious criminal cases. As regards the net worth of candidates, 824 of them — 29 per cent — are crorepatis and they have, on an average, assets of over Rs 5 crore. But this is the average of 2,856 candidates. The net worth of successful candidates will be much, much higher when you look at the amount of money being spent in each constituency.

What do we do with the fact that one-third of our MPs have criminal records and 20 per cent of them are facing serious criminal cases like murder, attempt to murder and kidnapping? This needs to be reversed and the best way to do it is to bar all those, against whom serious criminal charges have been framed in a court of law, from contesting elections until they are acquitted. In order to prevent vindictive prosecution, the courts must dispose of these cases on a priority basis as recommended by the National Commission to Review the Working of the Constitution, which was headed by former Chief Justice of India, MN Venkatachaliah.

Five decades ago, there would be large scale violence during elections in the country. States like Bihar and Uttar Pradesh were notorious for booth capturing. Prominent candidates in the fray would have their own armed gangs to disrupt polling in booths which were not favourable to them. The gangs would open fire, chase away election officials and electors, capture the booths and burn the paper ballots. This is now a thing of past

But the other big issue — money power — has reached monstrous proportions.  Although muscle power has been brought under control, spending in elections has gone completely out of control and the Election Commission appears to be totally helpless despite huge deployment of observers and seizure of cash, gold, liquor and drugs meant for bribing voters. In the first two phases of this election, the Election Commission already seized close to Rs 700 crore in cash, liquor worth Rs 218 crore and drugs and narcotics worth Rs 1,152 crore. They have also seized gold and precious metals worth over Rs 500 crore. Although this is unprecedented, it is still the tip of the iceberg.

Having travelled in some States and heard reports of voter bribing, one can safely say that although the Election Commission has raised the permissible expenditure in a Lok Sabha constituency in larger States to Rs 70 lakh, the spending is upwards of Rs 20 crore per candidate. Thus, if we have two main contenders for each of the 543 elected seats in the Lok Sabha, the candidates and their parties would have splurged over Rs 20,000 crores, mostly to bribe voters in this election.

With feudal, caste-based political families loaded with such huge, ill-gotten resources playing the game, democracy is becoming a no-entry zone for an average citizen. The Election Commission must come face-to-face with this reality and find ways to stop the bribing of voters. Failing which, democracy will be reduced to an absolute farce.