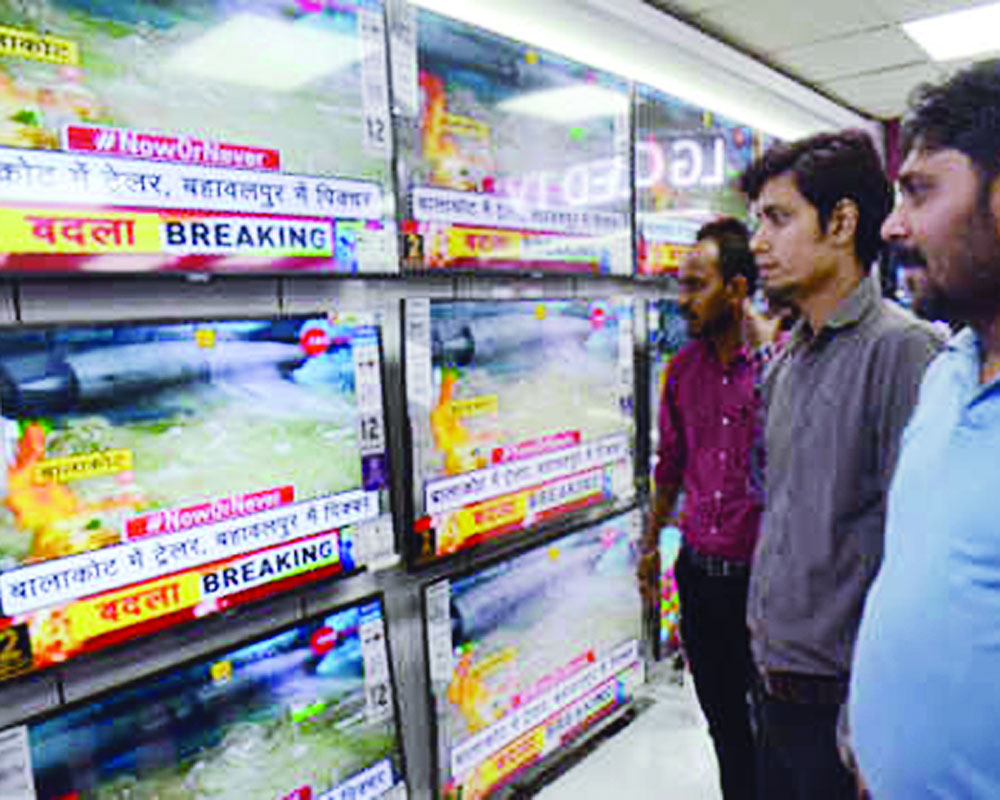 The nation awaits an unambiguous official version of the Balakot strike. Else, there is the risk of media and social media filling up the vacuum with fake and unsubstantiated news

News spread like wildfire on Tuesday (February 25) morning that the Indian Air Force (IAF) had struck at Jaish-e-Mohammed (JeM) terror camps at Balakot across the LoC in the wee hours. The strike reportedly led to massive casualties and confusion in the ranks of terrorists. One thousand kilos of bomb, one was told, had been dropped, leading to hundreds of fatalities. The triumphant mood proved infectious and the social media exploded in jubilation and jibes. Television journalists chattered with such conviction as though they were reporting from the site. Even though they behaved as “embedded journalists,” surely none of them had been flown in an aircraft to witness the massacre. The images used were also representative rather than actual.

Then one noticed the confusion about the location of Balakot. In war reporting, like in war history, maps are as important as the text. But journalists thought it was in Pakistan-occupied Kashmir, where intuitively most terror camps are located. There was an exchange of Twitter-fire between two well-known journalists regarding the spelling Balakot and Bala Kote as there was confusion about the precise strike location. But another journalist, perhaps aided by quick search on Wikipedia, informed on Facebook that Balakot is in Khyber-Pakhtunkhwa, meaning India had crossed the international border and not just the Line of Control (LoC).

In this melee, this writer scrambled for the official version of events. During the last surgical strikes of September 29, 2016, Lt Gen Ranbir Singh, the then Director-General of Military Operations, had issued a Press statement hosted on the Press Information Bureau (Ministry of Information & Broadcasting) website. There was significant difference between what Lt Gen Singh had said and how the media narrated the surgical strikes. But this time around, there was no such statement from the military and the defence establishment.

This writer looked into the Twitter handles of the IAF, Raksha Mantri (official handle), Nirmala Sitharaman (personal handle) only to notice that there was absolute silence on the issue. The only thing they tweeted during the day was the inauguration of the National War Memorial by the Prime Minister the previous evening. In fact, the airstrike was a non-event for Raksha Mantri, Defence spokesperson and the IAF Twitter handles on February 26, 27 and 28 for reasons best known to them. While the first two Twitter handles sprung to action again after the tri-service Press conference on February 28 evening, the IAF Twitter handle maintained silence.

Getting back to the subject, the text of the official version of the strikes was finally located on the Ministry of External Affair’s website. Why the Foreign Secretary should report an air campaign and IAF should observe silence over it is puzzling. But it was more perplexing to find that Foreign Secretary Vijay Gokhale’s statement made no mention of the IAF. In fact, it described the strike as “non-military pre-emptive action”, which reminded this writer of an innovative Bengali recipe of the 1960s, strangely named ‘vegetarian duck-egg curry’. It does mention Balakot but not whether it is in mainland Pakistan or PoK.

Subsequently, a string of pictures, presumably of the destruction wrought in Balakot due to IAF’s bombing, went viral on social media. Little notice was paid to the fact that the victims looked overwhelmingly civilians, including women, a fact that contradicted the Foreign Secretary’s statement that civilian casualties were avoided. But subsequently, they turned out to be old photos, capturing the destruction caused by an earthquake in Balakot in 2005.

Can the paradox get bigger than this? On the one hand, the Government is flaunting a zero-tolerance policy towards fake news. The heads of social media companies are being summoned before the Standing Committee on Information Technology. On the other, relevant Government institutions and Ministers in-charge maintain silence on such a vital matter or give insufficient and puzzling versions. The Government is, thus, itself helping unsubstantiated or fake news to proliferate.

Some people cite compulsions of secrecy about surgical strikes. One wonders what kind of secrecy is this where media knows more and social media still more about an event within hours but Government institutions provide little or confused information. Gerald Vincent Bull (1928-1990), the Canadian defence engineer who was developing a long-range artillery called Project Babylon “supergun” for Saddam Hussein, was assassinated in Brussels in 1990. His murder, still unsolved, is widely believed to be carried out by the Israeli intelligence service, Mossad. Did the then Israeli Prime Minister Yitzhak Shamir even refer to the action in public let alone taking political credit; although he might have authorised it in the first place?

How is it known which air bases the Miraj squadron flew out from and where was the campaign coordinated? Either the news is incorrect or supplied by some highly-placed sources within the IAF. Does that then mean that the IAF is leaking out confidential news while officially keeping silent on it? Is it the way to deal with military issues in a republic?

The Kargil War was a high point in that sense. It was India’s first “televised war.” Not only were images from the world’s highest battle theatre streamed into our homes throughout the day, but every evening, the then MEA spokesperson, Sardar Raminder Singh Jassal, kept us abreast of the developments. Having seen that era in one’s early youth, one finds this approach to information quite strange. On November 18, 2016, a large number of Lok Sabha members wanted to know about the number of camps destroyed and terrorists killed in the strike. The MoS, Defence, avoided giving an answer. Nor was any answer given to that effect in the Rajya Sabha. After that, the issue surprisingly went cold. The Government has not given any details about the event till date.

Many would like to convert the issue of “proof” into one of believing and not believing in the Indian armed forces. A “non-believer” would be immediately branded as anti-nationalist. But the issue here is actually different. It is whether or not citizens have the right to know the exact position from their elected Government? Is it whether the Government, in this era of fake news, should leave such information about such vital military event to the mercy of media and social media?

It appears in hindsight that Sardar Baldev Singh, India’s first Defence Minister, was charitable in his remarks. He said our Army, Air Force and Navy (sic) were fighting against Pakistan backed infiltrators in Jammu & Kashmir (1947). He reportedly did not buckle when people asked how could the Navy fight in mountains and valleys? He was merely providing some superfluous information, without being economic with the truth. Do we need an Official Version Act for the Government, which has conventionally been governed by the Official Secrets Act?

(The writer is an independent researcher. Views expressed herein are his personal)