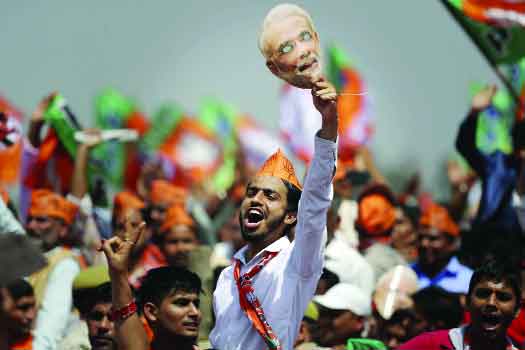 It is the scale of the Indian elections that baffles the world. Most countries view our democratic electoral exercise with utter disbelief and astonishment. The 2019 Lok Sabha elections were interesting for the fact that political communication in our country seemed to have finally come of age. Among the parties, the Bharatiya Janata Party (BJP) stood out to be the savviest in mastering the image-building and perception management exercise and also gained a decisive edge over its rivals.

Agenda-setting: Take for instance verbal communications. The BJP’s colourful and earthy slogans were an instant hit. They were at their simplistic and comprehensible best. The party managed to pull the rug under the feet of the Opposition with short and punchy coinages like mahamilawat, which was used to brand the Opposition parties. This conjoined word summed up the unprincipled and rag-tag coalitions formed by various political parties just before the elections and instantly robbed them of political relevance.

Similarly, majboor sarkar vs majboot sarkar was a lethal jibe as compared to the Congress’ weary slogan of ab hoga nyay. Roughly translated, the Congress slogan meant that justice would be delivered if it came back to power. Oddly enough, the party’s strategists did not realise it would automatically trigger a counter question in the minds of the voters: If justice was still pending to be delivered, what did the party do all these years when it was in power for the longest time and capable of changing the system? The Congress campaign appeared to be centred around superficial populist sloganeering coined in splendid isolation devoid of any social connect. On the other hand, the Congress’ somewhat catchy chowkidar chor hai jibe misfired and it faced national embarrassment for being  flippant and more personality than issue-oriented. Slogans formed by other Opposition parties were limp.  Regional party leaders, followed the old-style book of political communication. So they found themselves out of breath with the BJP’s national campaign blitzkrieg.

Yet another slogan coined by the BJP kaam ruke na, desh jhuke na advanced the party’s developmental agenda that remained to be achieved and contextualised the national pride as a rallying point.

Instead of offering progressive ideas and providing a constructive alternate developmental framework, the Opposition mounted a bitter and shriller negative campaign with personal level attacks, some of which were unbecoming of their stature and the public office they occupied. Many parties even reduced the electoral campaigns to ugly street-level brawls. Negative campaigns can work when left-handed compliments are delivered to opponents, dripping with sarcasm and humour. Perhaps none in the Opposition had the showmanship to pull it off. Resorting to personal attacks made them appear as a fringe mob pelting stones.

Such messaging and slogans itself achieved half the electoral success for the BJP. So much so that even when its own senior leaders hit their opponents below the belt, it was seen as avenging barbs and a victim’s right to defend himself.

Bespoke framing: Besides, verbal communication, the BJP’s near total obsession with non-verbal communication was equally fascinating. Public appearances suggest a well thought-out, meticulously crafted, immaculate and bespoke visual styling of its leader. Camera lenses were trained to capture and curate radiating energy and dynamism in the shots. Low angle camera shots and measured distance maintained in the foreground and background around the leader decluttered the frame and provided for just one single focal point.

The penchant was to clear the hoi-polloi from the frame to get singular visuals. Though amusing, such optics manage to build and reinforce a pattern of power and perception. The primacy given to staging, planning and visual framing is both formal, ceremonial, professional and unparalleled. It successfully transmits and conveys non-verbal cues to the masses besides giving a sleek and larger-than-life persona, always in command, at ease and in control. The new-age and savvy political parties are not leaving anything to chance in this hyper-saturated 24X7 media environment which is dictated by the power of visuals and imagery. The Opposition is yet to comprehend this to its fullest. Remarkably, even bitter critics of the BJP were floored with rousing and statesman-like speeches one heard from its leaders. There were eloquent, unscripted words laced with a higher purpose, conveying the big picture to the entire nation in a lucid, uplifting and scintillating manner. Sadly, the Opposition speeches appeared merely transactional and tutu-mai mai.

Media snobbery: Another humbling feature of this election was the media. The BJP’s disdain for the “Lutyens’ Delhi” and the “Khan market gang” is well-known. In spite of the relentless and stinging attacks mounted by a large section of the media, the BJP pulled off the perception battle on its own terms by highlighting its “common man’s spokesperson” image.

The election results neutralised and busted egos of self-styled opinion-makers in the national capital, who once bragged to make or break the fortunes of the ruling party by the sheer force of their publishing ink. They have been clearly bypassed and they need to deal with this hard reality. On election results day, the meltdown on the faces of television news anchors and newly-minted YouTube activists was relished by millions of Modi’s voters. The loss of credibility, neutrality and fairness of the ‘erudite’ mainstream media calls for examining if the fourth estate indeed has its ear to the ground. As if the ongoing electoral circus was not enough, the international Press jumped into the ring to lecture the Indian electorate on whom to vote. Notwithstanding the unsolicited advice and unwarranted trespassing into the ongoing sovereign democratic electoral process, ‘influential’ publications earned another round of egg on their faces after the results for this needless and meddlesome adventurism.

Overall, the BJP’s political communication stood out for its highly organised, targetted communication and one-to-one grassroots connect with the voters. Social media lost its novelty but it kept the electorate engaged and entertained till the end. The deft use of political communication — both verbal and non-verbal — played a key role in positioning the BJP in the minds of the electorate and contributed in elevating its fortunes to a historic high. It is never too late for the Opposition to take a leaf or two from this exercise and reset its communications tools to achieve both reach and relevance among the masses.